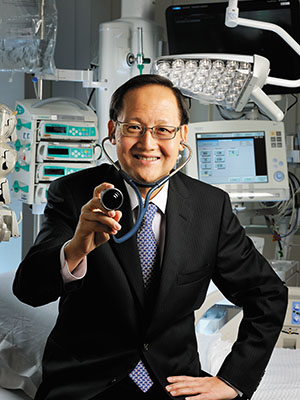 Badminton was the first to go. Then it was table tennis. Before long, this once-tireless athlete had given up cycling, running and climbing, and just lay about listless. Doctors in his native Sri Lanka knew he needed a kidney transplant. But they also knew that only a few places in Asia could handle a case as complex as his—a scary prospect for this nine-year-old.

Meanwhile, doctors for a much older patient had given up hope. The 81-year-old retired executive had fallen to a host of maladies and lay unconscious in the hospital. Help was just a short flight out of Jakarta, but away from the blinking monitors and whirring ventilators of intensive care, he would succumb within minutes.

Providing care for the sick and injured is a hard business to be in at any scale. The practices, the technologies and, most of all, the patients don’t always obey the rules of the  marketplace. Few industries fall so far under the heavy hand of regulators. In Southeast Asia, Kuala Lumpur’s IHH Healthcare has emerged as the biggest in a group of listed providers prospering by catering to the increasingly affluent middle class. This year, it breaks into the Fab 50 for the first time.

IHH went public only in July 2012. But as the offspring of two venerable hospital operators, Singapore’s Parkway and Malaysia’s Pantai, it’s no upstart. A takeover fight for Parkway a few years ago left India’s Fortis Healthcare in the cold—and alerted investors to the region’s possibilities for profits in private health care. “There’s a new market that’s growing with some exuberance across the region,” says Alexander Ng, an analyst at McKinsey & Company in Hong Kong. “Parkway always had credibility, but its professionalism in medicine and as a business had begun to attract patients from all over.” Investors figured the same model could work well wherever incomes are rising. Southeast Asian countries, he says, spend only four percent or five percent of gross national product on health care right now, so there’s plenty of room for growth.

The expectations have paid off. The stock has soared 75 percent since the initial offering, and IHH is now the second-largest health care provider in the world by market capitalisation, behind only US hospital operator HCA Holdings. Revenue should rise 14 percent this year, to $2.4 billion, with net profits climbing 19 percent to $238 million, according to Bloomberg. It added 1,000 beds last year and now has 25,000 employees. “This is more than a vindication that size and scale can make our business model work,” says Dr Tan See Leng, managing director and chief executive. “This proves that the people of the region are ready to support health care as an integral aspect of the good life.”

Consider Mount Elizabeth Novena Hospital, opened in 2012. The most expensive hospital ever built in Singapore, it’s designed like a business hotel, with soothing interiors and public sight lines to keep anyone from guessing they’re in a place with sick people. In the 40 private intensive care rooms, the gear hangs from the ceilings to make more room for caregivers. It also has 22 secured multi-room suites, three with enough space for the retainers, family and bodyguards of royalty, both dynastic and corporate.

None of this is meant to replace state and non-profit facilities, the company says. But it is meant to pamper patients, retain doctors and reduce waiting time for beds, a persistent problem.

Staff-to-patient ratios in private facilities are often three times those of public facilities. At Kuala Lumpur’s Gleneagles Hospital, this allows physiotherapists to design care programmes for patients recovering from surgery. “Medical doctors ratify everything, but we’re the ones who assemble the team,” says Hannah Pearson, head of rehabilitation services for the Malaysian unit of IHH, adding that this unusual step also saves time for doctors. 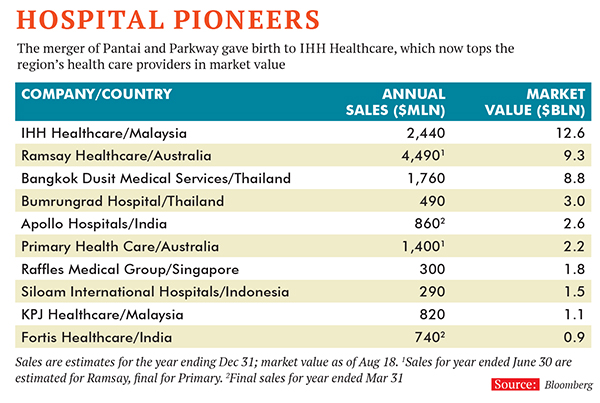 In most hospitals, lessons like these stay in-house. But Pearson shares findings with her peers throughout the IHH network, now comprising 37 hospitals and more than 6,000 beds, and operating from China and Vietnam to India and Turkey. “Collective intelligence helps best practices emerge,” says Tan, who became head of IHH in January, 10 years after joining Parkway after leaving the private primary health care network he’d started. “Only a network of this scale is in a position to aggregate so many experiences.”

Opportunity struck in 2010. “Nobody [in Singapore] wanted to see their beloved Parkway end up with Fortis,” one Singapore policy analyst says of the Indian company’s futile offer, which would’ve replaced local management. Khazanah, which already held the controlling interest in Pantai, came in as a white knight bidder for Parkway and won. Then it sold a 30 percent share to Japan’s Mitsui. The Parkway-Pantai combination went public, raising $2.1 billion in the world’s sixth-biggest listing of 2012 (Facebook’s was the biggest). Khazanah’s stake is now 44 percent, and Mitsui’s is 20 percent.

Going public freed up IHH to shop for business in more countries. It beat rival Fortis again, this time as part of a joint venture to build and manage a hospital in Hong Kong. “To win this deal, we did more than make assertions about what we can do,” says Tan. “We have results, proven results.” Once it opens in late 2016, the new Gleneagles Hong Kong Hospital will benefit from high local rates and little-for-profit competition. “Best of all,” according to Goldman Sachs’ Miang Chuen Koh, “this gives them exposure to the Chinese mainland.” With a lengthy average hospital stay of more than two weeks, that’s a market that can use professional management.

IHH’s toughest challenge lies thousands of miles to the West. Its purchase of a controlling interest in Turkey’s 17-hospital Acibadem Holdings, analysts say, disappointed IHH at first and dragged down results for several quarters before picking up just in time for a glowing 2013 report. Now the company intends to use it as a proof of the benefit of its size—the ability to train nurses in Southeast Asia and deploy them in a new market and to train Turkish nurses in Asia, for example.

Another benefit could be more significant. The large teaching hospitals of the West, and in the US, train hundreds of medical residents from Asia; many of these aspiring doctors would gladly repatriate for an employer such as IHH, and several have done so. But IHH wants to develop talent closer to home. To ensure a pipeline of medical technicians and doctors, last year, it bought Kuala Lumpur’s International Medical University, founded in 1992.

At least two patients are sold on the IHH model. The company maintains 24-hour, seven-day access to a private jet fully equipped as an intensive care unit, including a complete staff, and dispatched it to Jakarta to pick up the retired executive. Within weeks after his emergency flight to Singapore, he had not only recovered but was also back to taking his regular walks.

IHH also maintains one of the few operating rooms that can perform “keyhole” organ transplants—a necessity for some children. The nine-year-old in Sri Lanka has made a full recovery and is now considering taking up cricket.