In three decades, Chennai-based Adyar Ananda Bhavan has seen its revenue zoom from ₹31 lakh to about ₹800 crore 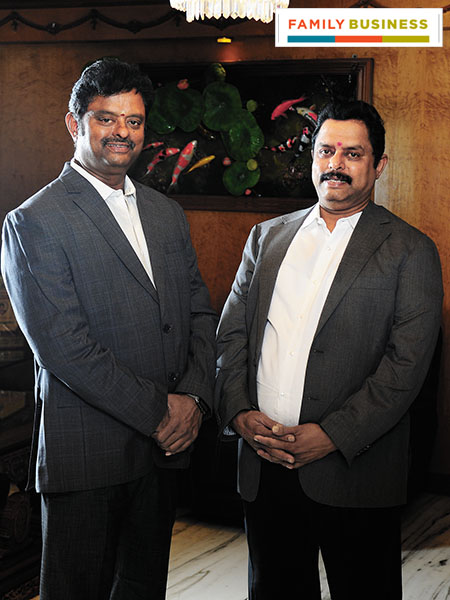 KT Srinivasa Raja (left) and KT Venkatesan of Adyar Ananda Bhavan
Image: Sharp Image
It was in the early 1960s that KS Thirupathi Raja opened a small sweet shop, Guru Sweets, in Rajapalayam town near Madurai, Tamil Nadu. Hailing from a family of farmers, Thirupathi Raja, then chose to take the path less trodden. With the help of Raja’s wife Muthu Lakshmi, Guru Sweets dished out items like wheat halwa, laddu, jahangir (a thicker version of jalebi), badusha and the famous Mysore pak. The store also sold a few savoury items, most notably karasev, made of gram flour. The adventure, however, was short lived as Thirupathi Raja, who passed away in 2001, shut down Guru Sweets within the decade, and returned to farming.

“In 1978, my father opened another sweet shop, Srinivasa Sweets, in Bengaluru near Malleshwaram,” says KT Srinivasa Raja, 58, Thirupathi Raja’s younger son. Srinivasa Sweets, unlike the previous shop, survived for about 10 years with Raja taking over the reins a year after it opened. “By 1980, my father and older brother [KT Venkatesan] had set up another sweets and savoury shop, Shri Anand Bhavan, in Royapuram, Chennai,” he says.

That was the start of Adyar Ananda Bhavan (it was renamed post 1988), which today boasts a turnover of about ₹800 crore and has franchise outlets in Singapore, Malaysia, and in Dallas and New Jersey in the US. It also operates a South Indian quick-service restaurant chain called A2B within its stores. A 210-seater Adyar Anand Bhavan franchise outlet is scheduled to open in Newark, US, shortly. “Our restaurant business contributes close to 50 percent of our overall business,” says Raja, managing director, Adyar Ananda Bhavan Sweets. His brother Venkatesan is also managing director of the entity, which has around 10,000 employees on its rolls.

“They actually built a restaurant business wrapped around their sweets and snacks business,” says Jacob Kurien, partner at private equity firm New Silk Route (NSR), which has invested in the Bengaluru-based restaurant chain Vasudev Adiga’s. “Most people depend on retail distribution to sell their snacking business whereas Adyar Ananda Bhavan sells a large percentage of their packaged foods through its own restaurants.”

In the late ’80s, Raja shut down Srinivasa Sweets in Bengaluru and joined his father and brother in running Ananda Bhavan, which by then had moved to Chennai’s upscale suburb of Adyar. The company’s annual business was to the tune of ₹31 lakh then. “My brother and I are school dropouts [classes 11 and 10, respectively],” says Raja matter-of-factly at the company’s 2-acre head office in Ambattur Industrial Estate in Chennai. Within the facility is a factory—one among four—as well as a temple of various deities.

At present, Adyar Anand Bhavan operates 140 retail outlets in India, located mostly in Tamil Nadu and Karnataka, with a handful in Andhra Pradesh and New Delhi; A2B restaurants exist in 95 percent of its outlets. “In 2000, we opened our first A2B outlet along with our store in Puducherry,” says Raja. “The restaurant was a big success and attracted huge footfalls. It was then that we decided to expand the restaurant business.”

“The beauty of the Adyar Ananda Bhavan model is that it has been able to maintain [high] quality despite its frenetic pace of growth,” says brand expert Harish Bijoor. “No other format in the South Indian restaurant space has succeeded to this degree to date.”

Over the last five years, claims Raja, Adyar Anand Bhavan has clocked a 15 to 20 percent compound annual growth rate with plans to open 60 more outlets across India. While Raja looks at business operations of the company, Venkatesan overlooks research and development. The third generation is also making its mark with Venkatesan’s son, Vishnu Shankar, handling finance.

That apart, there are a large number of senior-level professionals running the day-to-day operations of the company. “They gave people responsibility,” says Kurien of NSR, which is unlike other family-run businesses in the same space. “The inability to trust people and let go usually keeps these businesses small,” believes Kurien.

Raja has four children—three daughters and a son—all of whom are being trained to enter the business. “I am grooming my first daughter in finance while the second is studying to be a food scientist in Melbourne, Australia,” says Raja. His son Srivishnu, who also studies in Australia, but is now in India on a holiday, nods in agreement.

Adyar Ananda Bhavan has been a remarkable success story, but Raja plays it down with a simple analogy. Success, he says, is equal to skill and luck. “More skill and more luck are what made us successful,” he says. “My father’s vision was to run a successful business that could take care of his family’s day-to-day expenses.”

Clearly, the brothers went much beyond that. Anand Lunia, founder and partner at India Quotient, an early stage investment firm, says, “It’s tough to build a new Indian food brand. These brands [such as Adyar Ananda Bhavan] are built over years of folklore and good food.”