How Woollens are Selling: That Warm Feeling 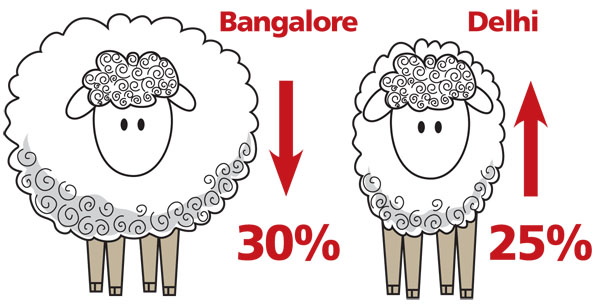 Infographic:  Minal Shetty
The climate change crisis has lead to some unusually low temperatures in many parts of the Northern Hemisphere this winter. (Yes, global warming does lead to colder winters as well.)

India has been no exception, with even traditionally broiling cities such as Chennai seeing some very pleasant nights.  Parts of the North have gone as low as -23.6°C.

Among the metros, Delhi has had a particularly tough time, with temperatures dropping as low as 3.7°C on January 4. The city’s lowest day temperature  of the season was 11°C.

Mumbai residents brought out their treasured woollies, when the mercury went to 13°C in December. (Bangalore’s delightful climate, however, did not seem to follow the national trend  of colder winters and minimum temperatures remained at their usual level, at an average of 18°C.)

What has this meant to the garments industry? Bangalore’s half-hearted winter saw a 30 percent dip in sales of sweaters and woollens and very few blankets sold. In Delhi, business boomed, with sales up 25 to 40 percent, and in Mumbai, stores we spoke to said that the city has never been a big market for woollens and sales continued to be low this year.

Tweets by @forbes_india
BMW's Andreas Schaaf: What They Say About India Is Only Semi-True
Is the Stock Market Overreacting?