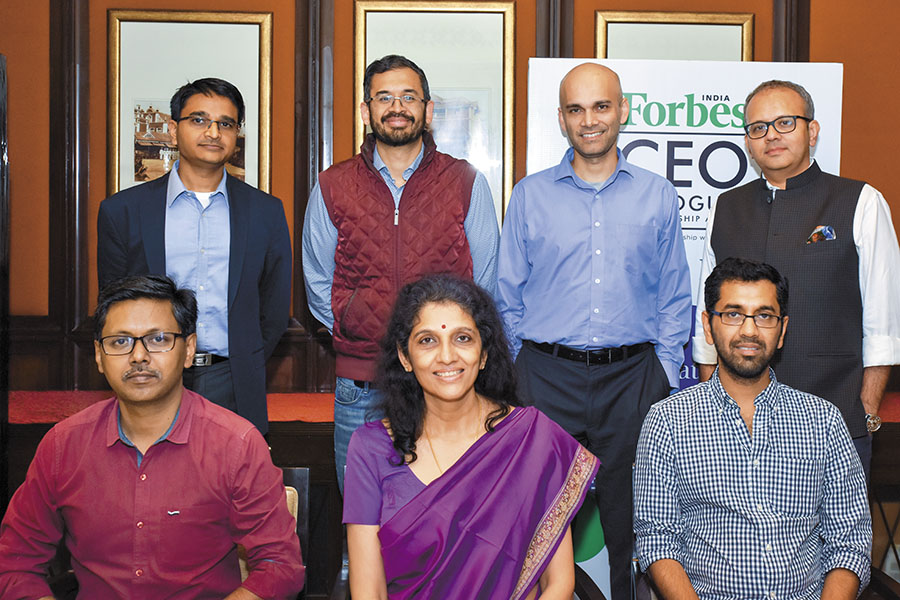 Whether it’s India’s top-tier software services companies like TCS, Infosys and Wipro or unicorns such as Flipkart and Paytm, large organisations are now targeting startups to provide new energy and momentum to their businesses. The rationale: Startups provide a strong foothold into newer markets and expertise in latest technologies. However, it’s easier said than done as there are a lot of complexities involved for the two forces to join hands and work together seamlessly.

Brian Carvalho: Somebody recently used the analogy of a tank and a speedboat for big corporations and startups, respectively. Tanks are slow, steady and sturdy, and they rarely stop. Speedboats are swift, unpredictable and capable of disrupting everybody else in the ocean. Perhaps it is because of these contrasting strengths that the tank and speedboat see merit in coming together. It may also explain why some of America’s biggest corporations like Microsoft, IMAX and PepsiCo have created accelerators for startups and made investments in them. Clearly, the big boys are hoping to find new ideas early. So, let us begin with a fundamental question: Why should startups ally with the Goliaths of business and how can this be mutually beneficial?
Meena Ganesh: When we started Portea Medical [a health care startup] which was positioned outside of hospital care, we were trying to disrupt a disorganised mom-and-pop market. But that required credibility. So allying with a large hospital chain upfront did help us in getting some degree of understanding of the business as well as providing us with credibility. I think it was a good symbiotic relationship.

Ashish Goel: I have a slightly different take on this. Large companies have asset bases, customer access and momentum that comes only with scale whereas startups have innovation on their side. The challenge is how do you make this [the partnership] happen? In the US, there are many examples that one comes across. Whereas in India, somebody [a large corporate] sees an interesting idea that somebody else [a startup] is doing and the natural instinct of the former is that ‘we have got more resources, we can get this done’. So, for that partnership to happen, there has to be a shift in mindset—you can’t do everything yourself. There are many large [Indian] companies which have incubators or accelerators, but I don’t think any real outcome has come from them.

GV Ravishankar: A lot of startups have this question, of whether or not to collaborate [with big companies]. For big companies, partnering with startups and observing the world through their eyes is, in a way, seeing what’s coming in terms of disruption. If you work with them, you will have better chances of understanding what’s changing the market. Bajaj Finserv is a good example. They have a new business which has some 70 people meeting every fintech startup in the country. They know more companies than we do.

Ashish Gumashta: I see a big change in the last three years. A lot of companies, and not just in the financial services space, are innovating and incubating ideas.

Ganesh: I want to add something important from the startups’ perspective. If you are a B2B [business to business] startup, then, of course, you only work with large companies, but if you are in the B2C [business to consumer] space, where your valuation and growth path are dependent on how big you are and how close you are to the consumer, it is super important not to over-rely on these partnerships. They are important, but you have to craft your own way to create that connect with the consumer to build your brand.

Ravishankar: It’s important to find the right alignment while partnering with a company, to have a symbiotic relationship—and not one that has one person (more likely the bigger company), squeezing the other, six months or a year down the line. It’s critical to have a well-managed balance of power. Otherwise, you are really creating an unsustainable relationship.

Ganapathy Venugopal: The value that they [big companies] can add to a startup, especially in the early stages, is immense. But that requires the management or whoever is working with the startups [from the big companies] to not treat the engagement as a vanity metric. I ran a survey among our [Axilor Ventures’] startups on the ease of doing business with large companies. On a scale of five, the ranking was 2.4. 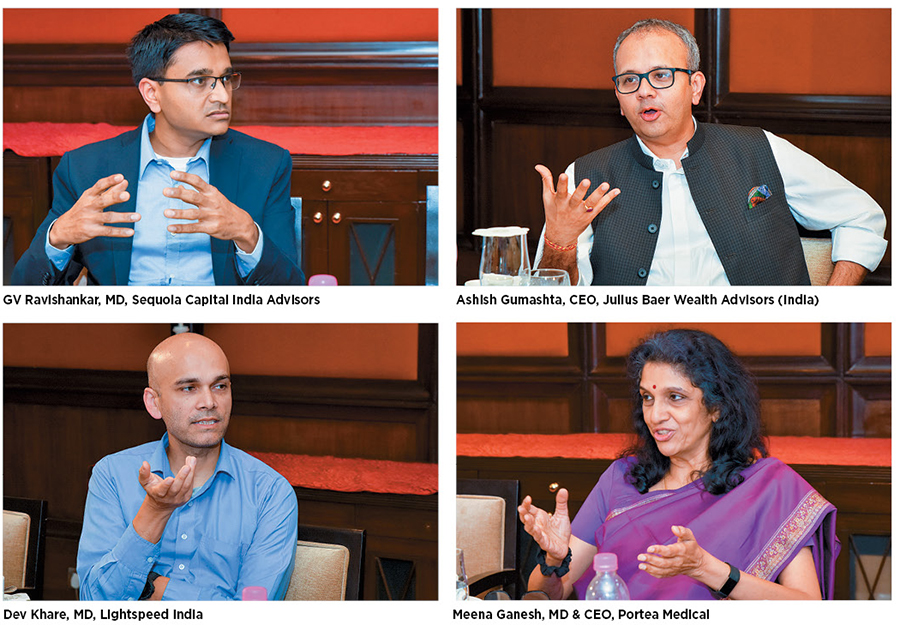 Carvalho: Do you think for a better working relationship a big corporate should try and first create a startup culture within itself?
Dev Khare: In the technology industry, there are founders still running companies that are at scale—Google for example. They have managed to maintain some sense of innovation. When founders are running companies, there has been an innovation culture that they have been able to drive.
Goel: An interesting exception comes to my mind—Titan. Years ago, the company created a new business line—of retailing gold jewellery with its brand Tanishq. Over a period of time, this business vertical has dwarfed the company’s core watches business. Then they also came up with another killer innovation which is Fastrack [a youth fashion brand].

Gumashta: There is a change in the thought process at large corporates. In many of them, the second generation is now responsible for innovation and investment in startups. For example, such initiatives are happening at Dr Reddy’s, CK Birla Group and Pidilite group.

Ananth Narayanan: We [Myntra- Jabong] have something called brand accelerator, where we invest in smaller brands and help them grow. The reason we do this is, we believe in the entrepreneurs; we believe they will create innovation, which is core to our business.

Carvalho: Do these relationships inevitably end up in an acquisition or are there other possible outcomes?
Goel: If I were to think about it from a large company’s standpoint… if I believe that a startup is truly strategic for me and would love to have control of its intellectual property, then absolutely yes.

Gumashta: From an investment point of view, if you take Julius Baer as an example, it has acquired businesses over the last 10 years.

Carvalho: Every startup wants to be a billion-dollar company, but the fact is that 90 percent of startups fail. That’s what some studies show. So by working with large corporations, which are known to have a high risk appetite, it would help reduce that failure rate.
Ganesh: From my experience with CustomerAsset and TutorVista, it made sense for both the companies to get aligned with a larger partner at the right time. In the case of the latter, it was first a strategic investment [by Pearsons] and then when we were about to raise another round of funding, we got an offer [from them], and we thought it made sense. Getting attached [to your company] and saying I have built this and am going to take it to nirvana or death is not necessarily the right solution. Entrepreneurs need to be pragmatic.

Narayanan: I will take Myntra as an example. I think Flipkart buying Myntra was one of the best things to have happened. And one of the best things that was done was to leave Myntra alone and not integrate it with Flipkart. I think founders need to figure out when to make that decision [the call of selling out], but I also think the buyer needs to be clear about why they are buying.

Carvalho: I want to talk about mentorship. Globally, Johnson & Johnson has four innovation centres to fund early-stage life science research. Do we have a similar ecosystem in the country?
Venugopal: In the US, there are about six angel investors per startup. In India, for every 150 startups you have one angel investor. I say angel investor because these are people with prior operating expertise and they are able to work with the founders. So this is one area where large corporates can play a big role.

Khare: I have an opposing viewpoint. I have seen a lot of large companies setting up accelerators and it feels like they are just grandstanding. There is no real help actually provided. I think a lot of mentorship is a waste of time because a lot of people just like to hear themselves speak. There is a lot of gas up there.

Ganesh: It is important for entrepreneurs to find the right mentor otherwise they can get pulled down to the speed of the mentor rather than retain the speed that they were earlier at. In India, most mentors come from either traditional industries or have been working in large Indian or international companies. They need to be trained to know how to work with these smaller companies and give them ideas and perspectives.

Carvalho: At the end of the day, going back to the analogy of the tank and the speedboat, one has to slow down and the other has to pick up speed in order to come together at some point.