Ananda Solomon, who introduced India to fine Thai delicacies, is back with his first new venture in decades—a restaurant called Thai Naam 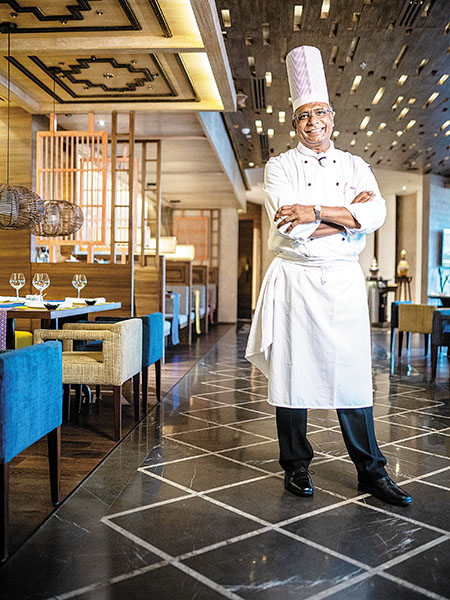 Chef Ananda Solomon hung up his boots at the Taj group after 25 years of service in 2016. He’s starting all over again with a new restaurant, Thai Naam, in Andheri
Image: Vivan Bhathena
Quite a distance from the Taj President in South Mumbai’s Cuffe Parade, where chef Ananda Solomon spent decades building himself a stellar reputation and three iconic restaurants—Thai Pavilion, Trattoria and Konkan Café—lies Thai Naam, a roomy 96-seater restaurant, bathed in rose-pink, cane and wood. The classic Thai outfit sits in suburban Andheri’s The Orb, a swanky new building that specialises in eclectic food and beverage offerings. Thai Naam’s four zones are inspired by different parts of Thailand’s varied culture, as is the vast menu the restaurant dishes up.

Solomon, who hung up his boots at the Taj group after 25 years of service in 2016, is fresh from a visit to Thailand, where he had been working with the king’s palace and a prominent hotel chain. He graciously guides us through the restaurant, pointing out intricate design and concept details, soft excitement and a passion for the country’s culture evident in his words. In between touring each corner of the restaurant’s bustling new kitchen and mouthfuls of a light, yet deeply complex green curry, Solomon talks us through decades in the food business, and the magic of starting all over again in his 60s. Edited excerpts from an interview:

Q. What made you decide to stick to Thai cuisine?
I don’t know anything else [laughs]. Actually, I specialised in French food, way back in the 1970s. I started doing Thai cuisine from 1990, and would visit Thailand quite often. With Thai Pavilion, we built an iconic brand, but a lot of work went into it. It didn’t happen overnight.

I’m back at a similar juncture, on a new journey. Of course, I don’t think I need to prove anything again, but the reality is that Thai Naam won’t be built in a day. However, I’m confident that a few months down the line, people will remember this as a brand.

Thai cuisine is so rich, especially in terms of the depth in its flavours and herbs. It needs a lot of patience and work to get that flavour balance right. Like in Indian food, there’s nothing documented in Thai cuisine—that’s why in India, every Amritsari kulcha tastes different. Moreover, Thailand was always a kingdom, without foreign rulers; so its cuisine doesn’t have any outside influences. It’s pure in nature, and its roots are really grounded well. So you can live your life not only on a one-dish meal, but also on a series of lavish meals. There’s something in Thai cuisine for everyone. It’s a blessed country in terms of its produce, so you could even just live on cut fruit. 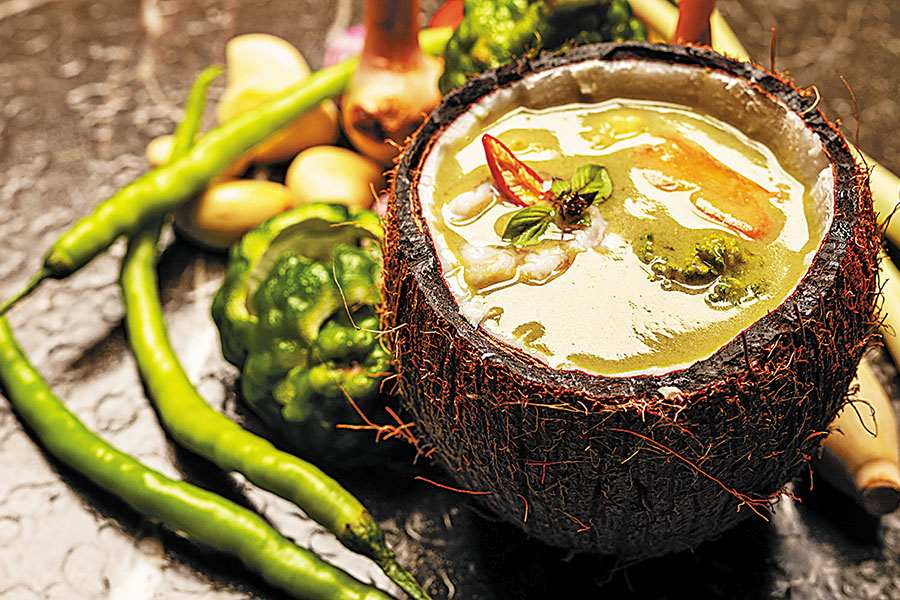 Gaeng Kiew Warn Koong—Thai green curry with prawns
Image: Vivan Bhathena
Q. Tell us a bit more about Thai Naam. How is it different from your earlier restaurant?
Thai Naam is my dream. I’ve envisaged it for many years. I’ve been inspired by Tao Downtown in New York [a fine Asian and nightlife destination]—where I worked for a while; its chef is a good friend—and always wanted to bring something like it to India. However, Thai Naam is also quite different from Tao.

I’ve stuck to my basics. I’m not known for fusion food, so I won’t do things I haven’t learnt. To use an analogy, if I give you milk, sugar, water and tea, the way you make chai and the way I make it will be quite different, even if the vessel is the same—that’s the glorious thing about food. Everyone brings their own personality to it. I do Thai my way—food cooked with passion and a bit of divine intervention.

We have developed a good, young team... fresh minds that I am training to my style. The kitchen needs to function like an orchestra, several instruments coming together like a well-oiled machine. It takes time—many retakes and a lot of practice—to get that rhythm right. But it has to be unique and harmonious.

Q. How has your diner evolved since the 1990s, when you first started serving Thai food?
Earlier, people didn’t really know what Thai food was. They only knew Chinese food. If you read the menu at Thai Pavilion, the pronunciations were intimidating; in fact, they would make fun of us for using traditional Thai words because they were unfamiliar.

Back then, the extent of people’s knowledge of Thai cuisine was limited to Tom Yum and Pad Thai. Today, there’s a lot of variety in food in India, from South Korean to Moroccan cuisines. Diners have more knowledge and information, even though it isn’t always accurate. We have a long journey to go here in India. New York is still the world’s centre for food because different nationalities there have the platform to showcase their skills.

In India, though, there’s a buyer for every kind of product today. The difference, however, is in the bottom line—back in the ’90s, people were willing to spend good money on dining out. Spending has reduced over time, while expectations have increased. Moreover, people are becoming fashionable in eating, watching what they eat, becoming picky in their diets. That’s new. 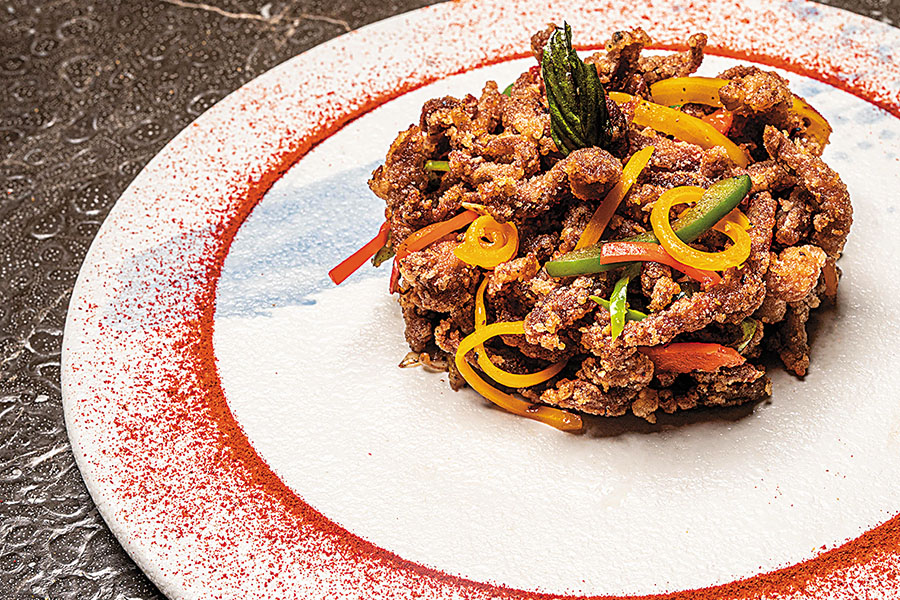 Q. How is running a standalone restaurant different from operating one within a large hotel?
The advantage is that you can change things quickly—you don’t have to wait for a group meeting or group decision to do so. While that is also a good way of doing things in a way, it often slows you down. The flipside is that here you don’t have different departments managing different functions for you; you’re doing it all on your own. At a hotel, you could just call the maintenance or housekeeping department if something wasn’t working. Here, my exposure is to every aspect of the business, and I’m learning many new things. I enjoy that. At the end of the day, what stays the same is that I want to see smiling faces when people leave the restaurant. And I’ll do whatever I need to do to get that.
Q. Why did you decide to open a space in Andheri, and not in South Mumbai where you had built a reputation over the years?
I was well-known until day before yesterday; I should now be known from today. I believe that history is made to be remembered, but you must recreate it to live. The simple answer is, I chose this area because I have space here. I wouldn’t do a very cramped restaurant and I wanted to do quality food. That said, I might venture into something on that side [of the city] too, as long as the location gives me the space I need. In fact, we are already looking for a space for another venture—which won’t be Thai food—and you could hear from us soon.

Q. The F&B space has become more competitive over the years with many seasoned restaurateurs facing struggles. How do you hope to navigate this landscape?
I’ve always seen New York as a leader in the F&B space and Hong Kong a miniature version of that; London is a notch between the two. Unfortunately, Mumbai or Delhi don’t figure on that list despite our large and food-obsessed populations. What really kills restaurants here are the rents. They can really drain you. Earlier, people could sustain not making profits for even one or two years. Now, you know within two weeks if you need to shutter down. The business looks glorious and glamorous, but it isn’t easy at all.

I wasn’t much of a business mind earlier, as someone else would manage that for me, but now, I spend more time looking at the numbers. It’s not my core competency, but I’ve realised that you don’t have to be a good accountant to be good at commerce. Business models are important.

Everything you put on the table comes at a price, which I didn’t earlier consider. I’m now looking at things like whether we should have our own laundry unit, for instance. I’ve had a few offers, and I’m not closed to the idea of entering banqueting in a few years either, even though that’s a different ball game.

You keep a certain amount aside to tide you over times of crisis, so your fixed costs are taken care of. But if you ask me, no costs are variable in nature, if you plan properly.