Abhishek Khaitan: In the spirit of things

The MD of Radico Khaitan has stepped into the world of restaurants, while bringing his celebrated whisky home to the Indian market 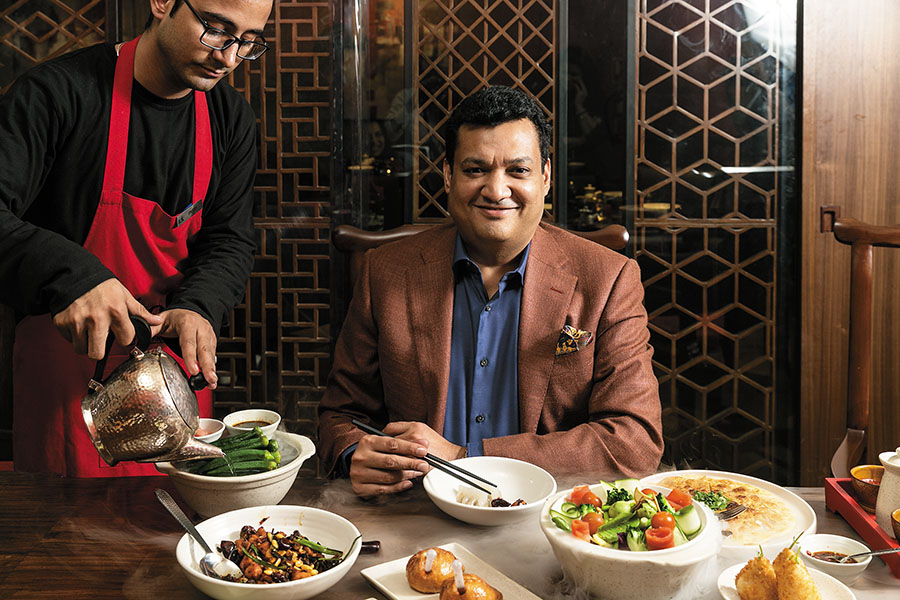 Vanilla, apricot, apple, spice...It is mid day and a tad too early to start drinking whisky, but had we been sipping on the Rampur single malt, arguably the best Indian whisky at the moment, its notes would have matched perfectly with the roast duck placed before us, waiting to be carved, dabbed with thick plum sauce and rolled into gossamer pancakes.

I am sitting at the new TCK (The China Kitchen) in Gurugram’s Cyber Hub, chatting with Abhishek Khaitan, 45, managing director of Radico Khaitan, one of India’s largest spirits companies. It is about to launch its Rampur single malt in India in February, and that is big news considering the single malt has garnered much attention with whisky connoisseurs ever since its launch two years ago for the export markets in the US, Europe and Africa.

As per the strategy also followed by other premium Indian whiskies, Amrut and Paul John, Rampur is ready to be showcased in India as well, albeit in limited numbers. I am expecting this conversation with Khaitan to be a spirited one, naturally, and we have got off to a suitably entertaining start with Khaitan regaling me with stories of his younger days in Bengaluru when he loved frequenting bars. “I practice what I preach,” he chuckles.

The reason we are dining at TCK is because Khaitan, in 2019, invested in the restaurant which he plans to take nationwide. This investment in the restaurants space is his private project, where he has partnered with Amritesh Jatia, a director in Asian Hotels that owns the Hotel Hyatt Regency in Delhi, and Padmanabh Mandelia, assistant vice president at Radico Khaitan.

TCK, which opened in January, is their first project, and a spin-off on The China Kitchen at Hyatt. Though spirits has been on the agenda, Khaitan wants us to check out his latest baby. Dishes conceptualised for this new, standalone, smaller--but-chicer format by three expat Chinese chefs are rolling in, as we sit forking up broccoli and snow peas.

“Why have you got into the restaurant space,” I ask, “when you know that profits are slim and most restaurant companies are slipping on scalability.” Khaitan is undaunted. He is sure he can make his newest venture work, and besides, as he says, business should be done with passion. “You have to give your dream a chance,” he says. This is what he has always done, even with the spirits business.

Khaitan had entered Radico Khaitan, his family’s distilling business, in 1997 as a 23-year-old at a time of transition from making bulk products to establishing their own brands. Until then, Rampur Distillery and Chemical Company, as Radico Khaitan was then called, produced alcohol for other liquor companies such as Shaw Wallace, United Breweries and Mohan Meakins. “Even as a pub-hopping student in Bengaluru, I wanted to have my own brands,” Khaitan remembers. That opportunity presented itself soon after he joined the business, which was suffering losses after the distillery lost contracts. There seemed to be no other option but to create something of their own. 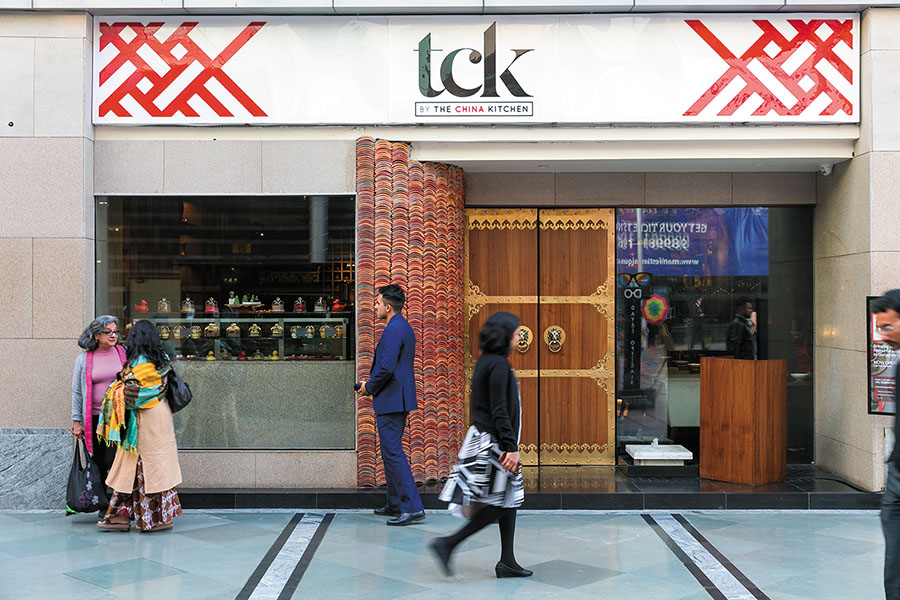 In 1999, Khaitan, who had hired 100 people, “whose average age was 23 years, because I could not afford more experienced professionals,” launched 8 PM, a blended IMFL whisky, lower in price than imported scotch brands, and it hit the bull’s eye. One million cases were sold in the first year itself and it became one of the highest selling whiskies in the world at that time. To create his first brand, Khaitan had to battle the old timers in his father’s company to change the company’s name to a more chic ‘Radico’. “It took me two months to convince them that no one would buy whisky from a company called Rampur Distillery and Chemical Company,” he smiles.

If this was the inception of a dream, there have been others that Khaitan has continued to follow. In the mid 2000s, at a nightclub in Las Vegas, Khaitan, had another epiphany. “I saw all the tables ordering bottles of Grey Goose vodka,” he recalls. Vodka was having a global moment, but in India its consumption was a fraction of the global rate (it accounts for 3.5 percent of spirits consumption annually in India, compared to 32 percent globally). However, convinced that younger, party-going Indians would want an indigenous vodka priced higher than other India-made vodkas but lower than imported ones, Khaitan launched Magic Moments in 2006. It was a direct competition to Diageo’s Smirnoff that had helped grow the vodka market in India.

“When I came back from Vegas, I wanted to launch the vodka and told my father, who asked me for a business plan. I told him, there was no business plan, just my belief that it would work,” says Khaitan.

While Khaitan has been telling us about his beliefs as an entrepreneur, lady finger ‘sashimi’ arrives at the table. This is just a salad of steamed okra and one of the inventive, healthy options on the menu. Then, there are bao dumplings with syringes full of balsamic and truffle oil injected into them, more proof of the chef and Khaitan’s desire for inventiveness.

However, when we rave about the tried-and-tested Bullet Chicken, a popular best-seller at Hyatt’s The China Kitchen for over a decade, Khaitan’s eyes light up, “Oh, we must have that too,” calling for what is essentially a poshed up chilli chicken, where chunky bell peppers have been replaced by beauteous round whole red chillies, glistening in oil.

The conversation veers back to restaurants, and Khaitan mentions this is not his first time as a restaurateur. About a decade ago, he had got together with friends like Dabur’s Amit Burman (who now runs the restaurant company LiteBite, with several brands) and the Somany Group’s Abhishek Somany to open The Forum, a splashy lounge bar in Delhi. As a young food critic, I remember going to The Forum, but coming back more impressed with the huge investment (for that time) of ₹2.5 crore, according to market sources, it had attracted. The restaurant world had been abuzz with this scale, as more modest restaurants could be set up for ₹40-70 lakh. 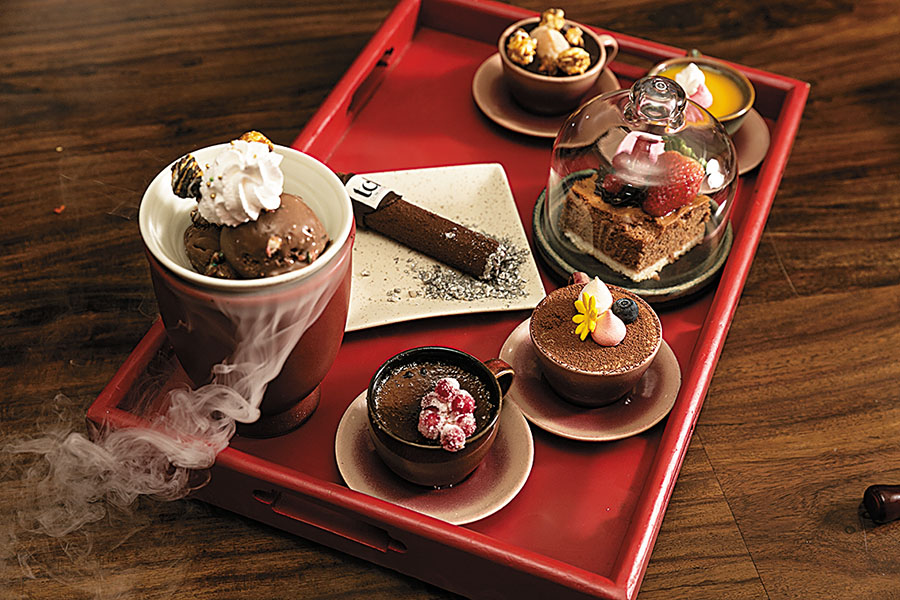 The ‘cigar’ at the restaurant is actually chocolate and the ash comes from broken bits of sweet almonds
Image: Madhu Kapparath

If Rampur, as an Indian single malt, is the toast of the whisky drinking world, Khaitan, forever in a quest to lead the spirits business, has been looking to up the game by playing in the upscale segment. This is perhaps also because he has realised that this would be the only effective strategy against foreign brands looking to play the price game. By creating Rampur, packaging it in a silken pouch that is reminiscent of India’s erstwhile princely state and the culture of luxury, and then selling it only internationally to create an aura of desirability (“there is a demand for anything that is scarce,” he says), Khaitan entered the luxury league in the spirits business.

Then, last year, he created Jaisalmer, an Indian craft gin that, again, is to be made and marketed in limited quantities as a high-end, high quality spirit associated with images of royalty, luxury and opulence. Apart from foreign brands, Indian craft gins like the Goa-produced Hapusa, Strangers and Sons, and now Jaisalmer are shaking up a category once dominated with low-on-quality-and-price products made domestically.

As we discuss the merits of these, the dessert tray comes up. Individual portions of pudding, layered cake and other bites are arranged artfully but the show stealer is the ‘cigar’. As we bite into it, we realise that it is chocolate, and the “ash” comes from broken bits of sweet almonds. Inventiveness can be sweet.

Tweets by @forbes_india
A dreamer who achieved what she dared to dream
Theodore Alexander doesn't see Ikea as direct competition: David Parker