Behind India's 'gin in the bottle' movement

A bunch of enthusiasts is experimenting with the spirit to lend it an Indian, and a more elevated, identity 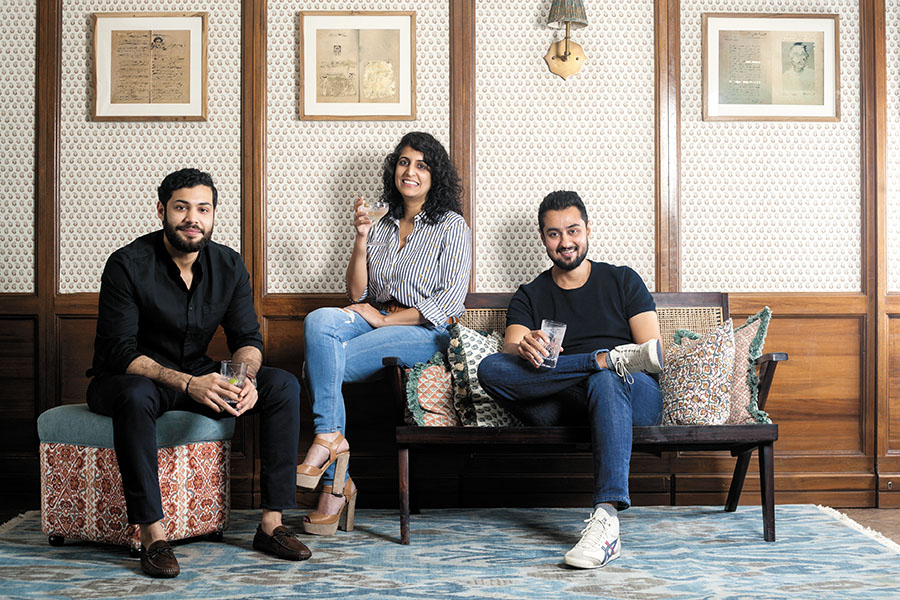 When Sakshi Saigal was studying for her MBA in Barcelona two years ago, all she could see around her were gin bars. It piqued her interest as well: Why isn’t India up to speed with gin?

She also realised that her cousin, Vidur Gupta, back from studying in London, had been obsessing about gin. It helped further that her husband, Rahul Mehra, was a partner at Gateway Brewing Company, among Mumbai’s first craft beer makers. After working on it for over a year, in 2018, the three launched their own gin in India, under the company Freehand Beverages, based in Mumbai.

Stranger & Sons, launched in Goa, where it is produced, entered the Indian market last September, by when the country had already joined the global rediscovery of gin with newer brands, and a spike in sales. In 2015, Anand Virmani and Vaibhav Singh had founded Nao Spirits and Beverages in Delhi, launched Greater Than in September 2017 and the premium Hapusa a year later, again in Goa. With craft beer having grown as a concept, and the single malt barrier broken with Paul John and Amrut, craft gin is the new Indian spirit venture.

While these three gin brands are being sold only in a few places, like Goa, Delhi, Mumbai and Bengaluru, their spread is just a matter of time. Word of mouth has been strong, the story compelling and discovery intriguing as young Indians find their thirst quenched by options not dictated by foreign brands.

Still beginnings
Seated in a conference room that doubles as their office in Prabhadevi, Mumbai, Mehra, Saigal and Gupta of Freehand Beverages alternatively pore over emails and banter. From Barcelona, their research on how to make gin took them to Scotland, Amsterdam and several other places. They learnt that Scottish distilleries, while waiting for the whisky to age, were making gin on the side.

By May 2018, they were ready—their stills had come from Amsterdam, their label had been designed by an Argentinean they found on Instagram, bottles were imported from Italy, corks from Portugal and one year was spent on the name. Their do-it-yourself facility was ready to produce gin that had to be peppery and robust, and not another London Dry.

“The two of us put the still together,” says Gupta, pointing to Saigal. “We did it Egyptian-style, and I was hanging on it like a monkey.” Saigal adds, “I was reading the manual on the floor… Someone painting the walls asked if this is a DIY distillery.”

With an investment ₹2.5 crore sourced from family and friends, the experimentation—from thought to action—had rolled out seamlessly, without a great pause for what-ifs or overarching ambition. Their biggest fights were over the name, because they wanted it to be Indian but not something along the lines of ‘Ratlam ki Rani’ or ‘Saffron Tigers’.

Their tasting sessions would start at 9 in the morning. “Every gin is 0.2 percent different from the other,” says Mehra. “There are only tweaks in the 10 glasses in front of us. We are not tasters, and our palate has restrictions. What we were gauging had no benchmark.”

Nao Spirits and Beverages’s Virmani, who had worked with Remy Cointreau and William Grant & Sons, had earlier partnered with Singh to set up Perch Wine and Coffee Bar in Delhi in 2015, when they realised they didn’t have the kind of gin they wanted. That turned into a two-year quest, during which they realised gin was relatively easy to make because it doesn’t need ageing like whisky.

In India, over the last decade or two, the only options to local gin varieties like Blue Riband were the more expensive international brands like Gordon’s, Bombay Sapphire and Tanqueray. The options have widened with trendy, upscale ones like Monkey 47, Botanist and Hendricks, which Virmani had helped launch while at Remy Cointreau. 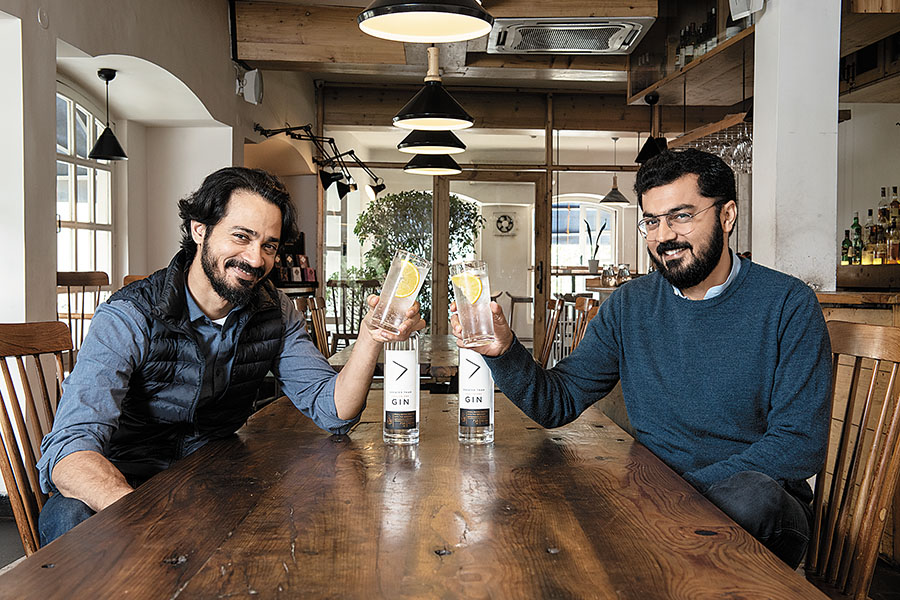 ‘Craft’ is a term typically used for brew that’s produced in a small setup, at a modest scale and sold locally. While it uses freshness as its unique selling proposition, it’s founded on the dream of being boutique, with limited growth ambition. Driven by independent entrepreneurs who want to elevate hobbies and home-brewing into a commercial venture, it wears some snootiness as its identity.

Virmani, who has a master’s degree in wine business, says they got an international wine firm to validate their hypothesis (on the need for Indian gin) because, “it’s great to have a gut feeling, but people don’t put money on it”. Like Freehand Beverages, Virmani’s venture was set up on a budget of ₹2.5 crore sourced from family and friends, and produces a London Dry variety of gin called Greater Than.

Parallel processing
While producing gin, Freehand Beverages’s Mehra was working simultaneously on another project. Along with Aneesh Bhasin and Sahil Jatana, he launched Svami in March 2018 to provide an alternative to mass brands of tonic water, the quintessential mixer for gin, like Schweppes and Dukes. Svami’s tonic does not overpower the taste of the gin, has less sugar, uses quinine that took six months to be sourced from Congo and is available in three flavours. It’ll soon sell ginger ale, another partner mixer to alcohol. “They [tonic waters] have to be balanced, play a supporting role to spirit, and not overtake it. Gin is a nuanced drink. We worked on a few recipes and something we could drink again and again on a Sunday afternoon,” says Bhasin.

Gin predominantly has botanical ingredients, such as juniper berries, coriander, lemon, orange, grapefruit and liquorice. Some may add turmeric or mango or spices such as cardamom and cinnamon to it. These natural ingredients are kept in neutral spirits (alcohol that has not been aged or flavoured) for up to 16 hours and distilled. When Stranger & Sons made their first batch, the coriander was overpowering because they used Indian produce, which is stronger than the “soapy” Bulgarian ones they had tasted before. “We were wondering, ‘What is this dhaniya drink we are making?” laughs Saigal.

Even now, one of the criticisms they get is that the taste is too overpowering or spicy, which differentiates Stranger & Sons from the other well-known brands. “People say it’s not balanced. But then, who decides what balance is,” asks Gupta. “We get that it’s too distinct, but we get that about our personality also. Taste is subjective, you do need people to hate you.”
“It’s a juniper slap in the face,” says Nick Harrison, co-owner of Mumbai’s French restaurant and bar Slink and Bardot. “That makes it stand out from a lot of commercial, big production gins, which are neutral and lack character.” 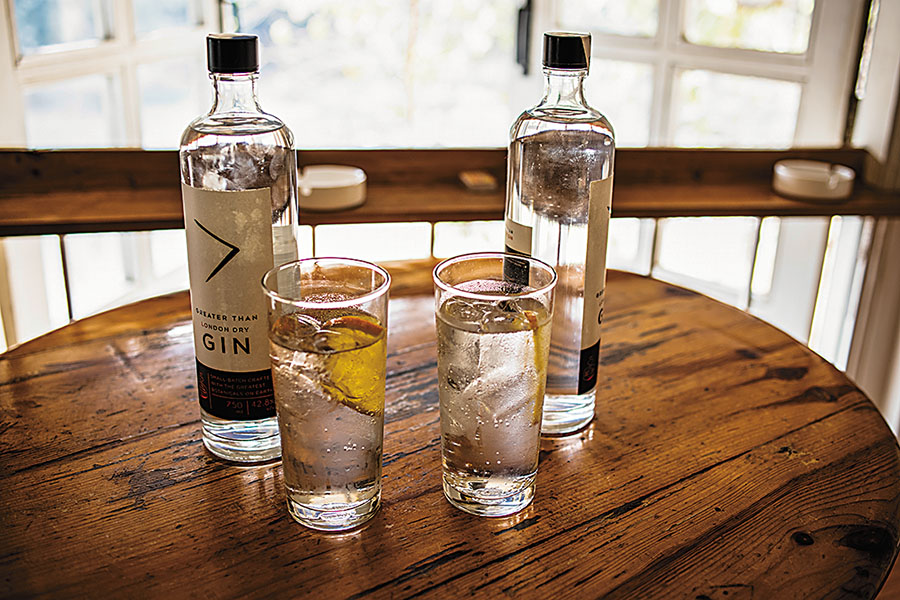 “Greater Than suggests rosemary, which I might use, to alleviate that flavour,” says mixologist Varun Sudhakar, head of Beverage Innovation & Operations, Gourmet Investments, to explain why he likes Indian gin in cocktails. “I might use Hapusa with 10 ml of dry vermouth and holy basil; turmeric or ginger might get alleviated.”

While Stranger & Sons gets its juniper berries from Macedonia, other botanical ingredients are locally sourced, some from the farms neighbouring their facility in Goa. The botanicals are also one of the reasons why the trio were curious about making their own gin in the first place.

“No matter what gin you drink in the UK, they have an Indian name or buy half their botanicals from India. Audiences here believe Indian products are not up to the mark. You will have a cheap gin from abroad, but if someone is making something in Kodaikanal, you will think twice,” says Mehra.

Gin’s India connection dates back to the late 1800s when the new British residents struggled to deal with malaria here. A local cure came from the bark of chinchona or fever tree, which contained quinine. The colonial rulers mixed that with sugar, lime and ice producing the famous gin and tonic. One of the drivers of the gin renaissance worldwide has been UK-based Fever-Tree, the ‘Indian tonic’ launched in 2005.

No booze, no hangover
Mehra says starting any alcohol brand in India has its challenges, with bureaucracy and customer perception as the main ones, besides needing deep pockets. On December 31, for example, they got messages stating that excise duties would increase from January 1, leaving them wondering where their transportation trucks were, and what they would need to do to comply at such short notice.

There were smaller issues, too, like cleaning the still. “We didn’t have botanical bags and juniper berries get really sticky. It’s for a reason they are used in adhesives,” says Saigal. 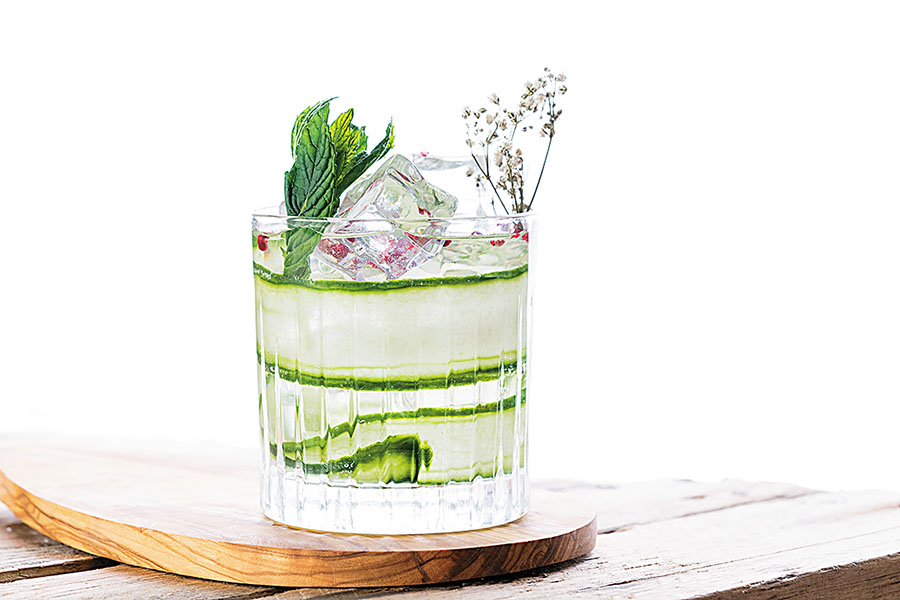 Greater Than, from Singh and Virmani’s stable, launched in 2017
Image: Shutterstock

Neither Nao Spirits nor Freehand Beverages have advertised much, nor are they sold in too many places. The companies speak of expanding in baby steps, including going to London, Singapore and Norway. Greater Than is available in Bengaluru, Goa, Delhi and soon Maharashtra. Stranger & Sons has Bengaluru and Delhi in its line of vision, while Hapusa is only available in Goa.

The size of the gin industry is not big: About 2 million cases (each with 12 bottles of 750 ml each) are consumed in a year. Yet, it makes India among the world’s largest gin consumers. Most brands that are sold, however, are low-end products.

“It’s not the market we are going for,” says Virmani. “Ours is a market where it costs ₹900-1,200 for a bottle; affordable for most part.” Greater Than sold 30,000 bottles in 2018, while Hapusa crossed its annual figure of 500 cases in four months, he adds. Stranger & Sons makes 2,000 litres in batches, about 5,000 bottles, which they sell wholly, though they have the capacity to do 30 times that quantity.

Nao Spirits and Freehand Beverages are not competing, say their founders, because right now their markets are different, and the pickings are so small that they can happily co-exist. They touch different price points too: ₹750-2,000 for Greater Than and Hapusa; ₹1,450 for Stranger & Sons (in Goa).

“It’s a passion project gone viral,” believes Gupta. “So that by the end of our human tenure, we can say, cool, we did that.”

Mehra wants to build a visitor centre at the Goa unit, and a training centre, that will have short courses on how to make gin, rum, and whisky. “This was meant to be an ode to India, India in a bottle, for a section of contemporary India that’s like us,” adds Gupta.