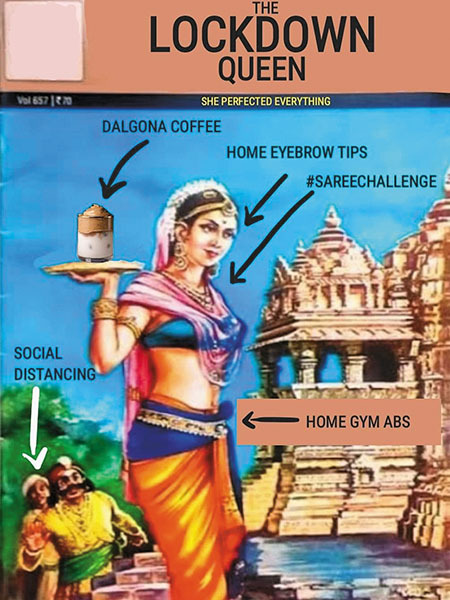 A few months ago, when the world was still learning to deal with the curveball called the coronavirus pandemic, and the ensuing lockdowns that kept us prisoners at home, a new queen appeared on social media. Clad in a fitted orange skirt and a short blue blouse with a sheer shawl thrown across her shoulders, she embodied lockdown perfection: A cup of Dalgona coffee in hand, and with abs flat enough to suggest regular home workouts, she had a couple of safely ‘social distanced’ male admirers. This image of the ‘Lockdown Queen’ that immediately went viral was a meme created by advertising professional Hari Krishnan, using an old cover from an Amar Chitra Katha book. Elsewhere on the internet, another queen—regal but sad, holding a flower in one hand—emerged with a caption: ‘When you get all dressed up to go drinking… in the living room’. This early pandemic meme, using the classical painting of a woman dressed in royal finery, was created by Sowmya on her Instagram page ‘Raja Ravi Varma Memes’. Hari and Sowmya are part of a growing tribe of amateur artists who are using historical art themes to create memes on contemporary subjects. And then there are others, like ‘Royal Existentials’ by Bengaluru filmmaker Aarthi Parthasarathy and her partner Chaitanya Krishna, ‘Inedible India’ that draws inspiration from a range of artists, including Raja Ravi Varma, and ‘Mad Mughal Memes’ managed by a team of seven strangers who get together on the internet purely for a shared love of Mughal history and a whacky sense of humour. Their styles are varied, and their inspirations come from different sources, but the common thread is their passion for dismantling stereotypes and prejudices through the use of humour. In the case of Mad Mughal Memes, the intention is also to present Mughal history as both hard facts and easy trivia to their followers—more than 330,000 on Facebook, including notable history enthusiasts like William Dalrymple, Rana Safvi and Swapna Liddle—in light, bite-sized memes. They play with a wide range of canvases—from traditional Mughal portraits to scenes from popular films. Ergo, the image of the double-bladed lightsaber from the Star Wars movies to depict Aurangazeb trying to simultaneously win wars in the Deccan and in Delhi. Admin member Pritish (who goes by the screen name of Zauq) says the aim of this page can be described as infotainment—making people laugh and learn at the same time. 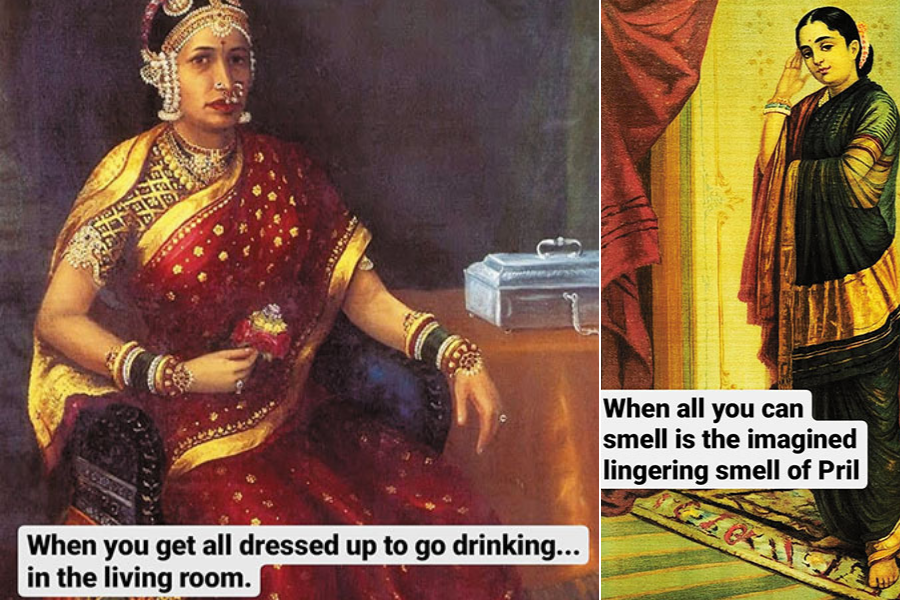 Sowmya finds Raja Ravi Varma’s depiction of women problematic. So, she adds funny captions and places people within modern culture Sowmya, an MBA with a full-time job, followed up her early interest in art through a short course in Art History and Curatorial Studies at Mumbai’s Bhau Daji Lad Museum in 2017. Her popular Raja Ravi Varma memes Instagram account started as an assignment for the course. When she realised that her fun project about “art, served with a side of humour” had taken on a life of its own, amassing thousands of fans, she decided to keep at it. She says her aim was to make art more accessible to viewers: “Adding text to Varma’s lithographs was a way to bridge the gap between high art and low art. Making memes out of classical art reduced the distance between the art and the onlooker.” Varma’s paintings seemed the perfect choice, since they have ceased to be mere decorative art, and have entered the realm of pop culture through calendars, advertising and product packaging. However, while admiring the art, Sowmya found the artist’s depiction of the human form, particularly women, to be problematic. She began to think of funny captions to add some character to the women, place them within contemporary culture, and take the leap from dated femininity to bold feminism. “It was a way to root the scene depicted by Varma in the reality of the India we live in today, which is vibrant, diverse and filled with more potential, especially for women,” she explains. For instance, her initial memes were about the everyday mind and body issues faced by urban Indian women. Ditto for Parthasarathy, the artist behind Royal Existentials, whose take on the most topical news assumes a feminist angle. As a student of communication, she found that art history lessons tended to focus on Western art. For her comic-meets-meme work, she decided on a consistent Indian aesthetic, as found in miniature art. The horrific rape of Jyoti Singh in 2012 that shook the nation was also the starting point of her interest in creating artwork that reflects upon and questions societal norms around misogyny and patriarchy. “I felt that we had been internalising misogyny, letting things pass because ‘that’s how things are’, or consuming sexist content because there was no option.” Royal Existentials (currently on a health hiatus) was born as a place to express her anger and frustration, one she describes as a meeting point between philosophical rumination and vocal activism. The name itself is meant to poke fun at the privileged class, those who sit in their homes and have a drink and a chat about the pointlessness of everything. “It is meant to be a critique of the great Indian middle-class, because we just keep talking,” she sighs. 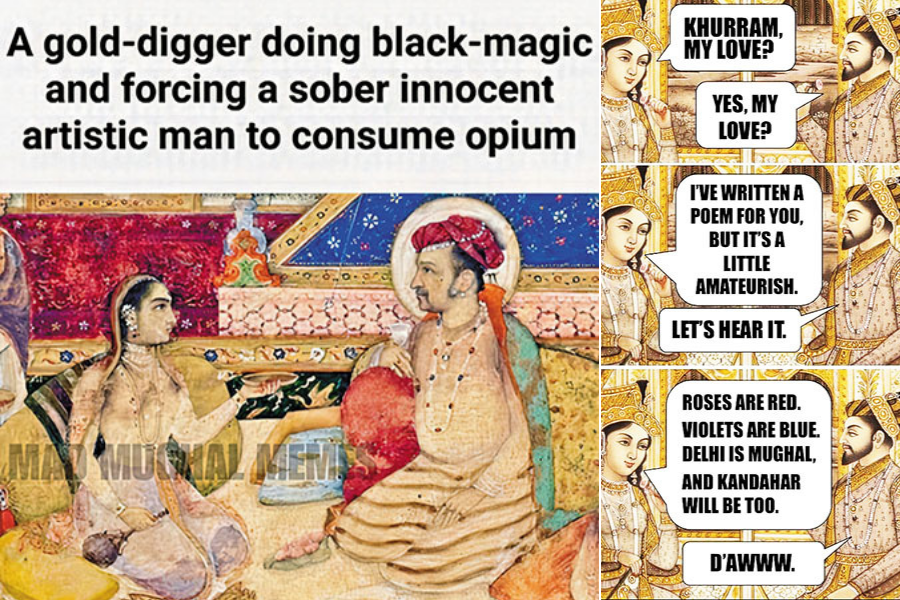 The intention of Mad Mughal Memes is to present Mughal history as both hard facts and easy trivia. Admin Zauq says the team gets trolled at times for its political commentary Similarly, for Hari the idea of using Amar Chitra Katha illustrations to create memes came about when he thought of the biased and sexist lens through which some of these much-beloved stories were presented. “Despite how popular these comics are, I felt there was something wrong about how they portrayed good against evil. For instance, the gods were always fair-skinned and the asuras dark-skinned, the women were all similarly curvaceous and attractive. So, I thought, in these beautiful and innocent images, can I put something ugly and real, and hold a mirror up to society?” He cites the example of jingoistic WhatsApp forwards that make the rounds, such as one that said that Indians had always been great upholders of personal hygiene (in the context of Covid-19), given that the culture is to say ‘Namaste’ rather than shake hands with a stranger. “When someone comes up with such absurd theories, I immediately feel the need to knock them down. And with the right kind of humour, I can get away with a lot.” Hari explains that memes work by mocking a common enemy. “My job is to find punching bags that everyone in a community can laugh at together,” he adds. This probably explains why, although memes have existed on the internet for a few years now, they have found a new wave of admirers during the recent lockdowns. Sowmya’s memes, for instance, have given her nearly 24,000 Instagram followers a new way to cope with pandemic blues by commenting on shared themes that everyone can relate to—from waiting for hair salons to reopen to dealing with guilt caused by procrastinating over domestic chores. Similarly, Hari’s analysis of the work-from-home situation, with the unceasing and often unfair demands of corporate life, have become a hit among his fans. He says that enjoying and sharing these memes act as a means of “relief from this pressure balloon that is building up around us”. He considers humour a great way to express anger and frustration, which explains why many of those whom he lampoons—for instance, corporate honchos—find his work enjoyable and funny. “A CEO can’t admit that he finds Zoom calls useless,” says Hari, “but they laugh at my memes on how people behave on Zoom calls, because it is an acknowledgement of what they are really feeling.” In that, he believes his role is that of a court jester, breaking the tension and keeping the mood light. That does not, however, mean that the subjects they explore through their memes are limited or lightweight; anything current and contemporary finds a place in their work. This also means that their art is rarely divorced from politics. Parthasarathy says she gets her ideas from the news, some of which feel close to satire. “Nowadays comic artists and meme makers, and comedians have a lot of material to work with… that’s a sign of bad times,” she says. Likewise for the makers of Mad Mughal Memes. When actor Kangana Ranaut recently compared the Brihanmumbai Municipal Corporation’s demolition of her Mumbai office to an attack by Babur, the founder of the Mughal dynasty, admin Zauq immediately posted a painting of Babur’s army in Afghanistan, captioning it ‘Babur leading his forces to Bandra, 2020 AD (colourised lithograph)’. Zauq says the team gets trolled and even abused for any post that feels like a comment on current politics. “There are always people calling us propaganda spreaders, and we sometimes get borderline hate comments. They are particularly sensitive about Aurangzeb and Chhatrapati Shivaji. And anything that even seems like an attack on Narendra Modi or Amit Shah.” In a way, it can be said that historical Indian art is seeing a reboot in the form of pop art, memes and comic strips. With free access to images online and intuitive editing apps, making memes has become easier than ever before. While purists may deride the use of classic art, this trend is only a shot in the arm for traditional Indian art that is given a coat of freshness and modernity by creative pundits. And by using familiar motifs and images—from that of Leonardo Da Vinci’s Mona Lisa to actor Hrithik Roshan playing emperor Akbar on screen—these artists are pointedly poking fun at sociocultural idiosyncrasies and keeping important conversations alive in these politically charged times.

Tweets by @forbesindia
RBI goes on the offensive; tweaks real estate lending norms to spur growth
Rooms that tell tales of its inhabitants