Surfing is gaining ground in India—just not among Indians

India's coasts are attracting professional surfers from countries as far as Norway and Switzerland, but locals are yet to embrace the waves 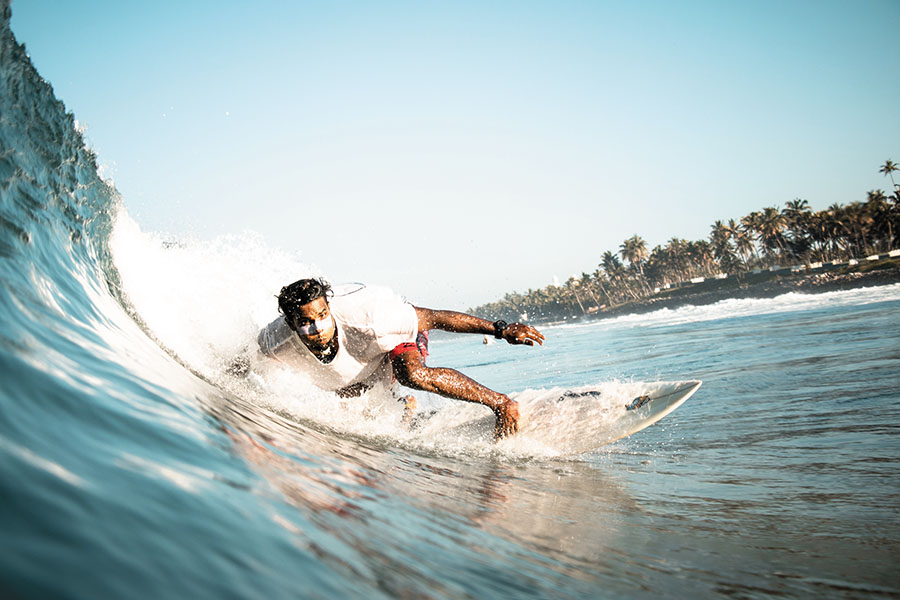 Varkala, a small coastal town in Kerala about an hour from Thiruvananthapuram, could pass off as an ideal destination for tourists, with its pristine beaches and clifftops. The sea reflects the clear blue skies and if you are lucky, you could even spot a dolphin or two. But for the surfers who gather here from across the world, this peaceful locale is where all the action is. From professional surfers who wander across the globe in search of challenging swells to beginners who are cautious of the sea, Varkala and its neighbouring areas are being counted among the surfing hotspots of the country. Surfing in India is slowly getting attention within India and also outside the country. Spots such as Varkala and Kovalam in Kerala, Puducherry near Chennai, Tamil Nadu, and Mulki, 40 minutes from Mangaluru in Karnataka, are gaining traction among seasoned surfers as well as amateurs. Back in Varkala, early on a winter morning, a group of surfing enthusiasts and trainers from Soul and Surf (S&S) Club is on its way to Edava beach along with instructors. They have the beach to themselves, since it is a Friday and the local fishermen, who are mostly Muslim, take the day off from work. Verghese Antony, head surf instructor at S&S, says they have to change their surfing spot every day, depending on which beach is less crowded; on some days it’s Edava, while on others it is Kaapil, and so on. The surfers are primarily from Europe, with a few from the US, while the trainers are locals from Varkala Edava beach is flanked by cliffs on one side, and is lined with colourful fishing boats. The beginners form a circle beside the boats, and start their warm up routine, learning new postures atop their surfboards before entering the water. They learn how to paddle while lying on the board, and how to balance themselves while standing and riding a wave. The experienced surfers are already deep into the water, looking, from a distance, like a group of people sitting on the surface of the sea and relaxing. 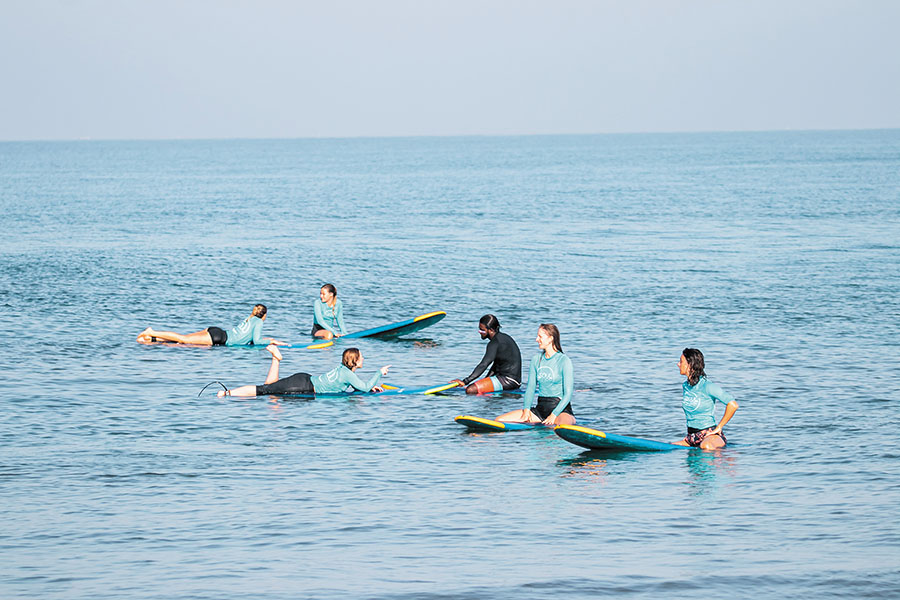 Advanced surfers wait inside the sea for the right swell and waves
Image: Jamie Mitchell

Once the warm up is complete, the beginners, too, head into the sea, surfboard in hand and its leash attached to one of their ankles. They are accompanied by their instructors, who, in addition to training the learners, also ensure that everyone is safe. The experienced surfers are already catching one swell after the other, skilfully manoeuvring  through the waves. This is how a typical surfing school in India functions; most schools that are certified by different surfing associations have trained instructors who are also trained lifeguards. Surfing is believed to have come to Varkala with Jelle Rigole, a surfing enthusiast from Portugal. “More than a decade ago, I wanted to make it a point to surf at as many surfing spots that I could find,” says Rigole. His search brought him to Kovalam and Varkala in Kerala, around 10 years ago. “Although there were great waves to ride, I was taken aback by the lack of resources for the children in that region,” he says. Determined to do something for them, he borrowed some surfboards from friends and started giving free lessons to the local children, thus initiating the beginnings of the Kovalam Surf Club (KSC), which he set up around a decade ago. But getting the children—most of who did not attend school either—to come for the lessons was a tough task. He had to go door to door to convince parents. He adds that death by drowning is considerably high in India, which is a reason why people don’t like going into the ocean. “In addition to that, having a sun tan because of being in the ocean for a long time was not acceptable in many households,” he says. The club continues to give free lessons to local children to encourage them to learn surfing. 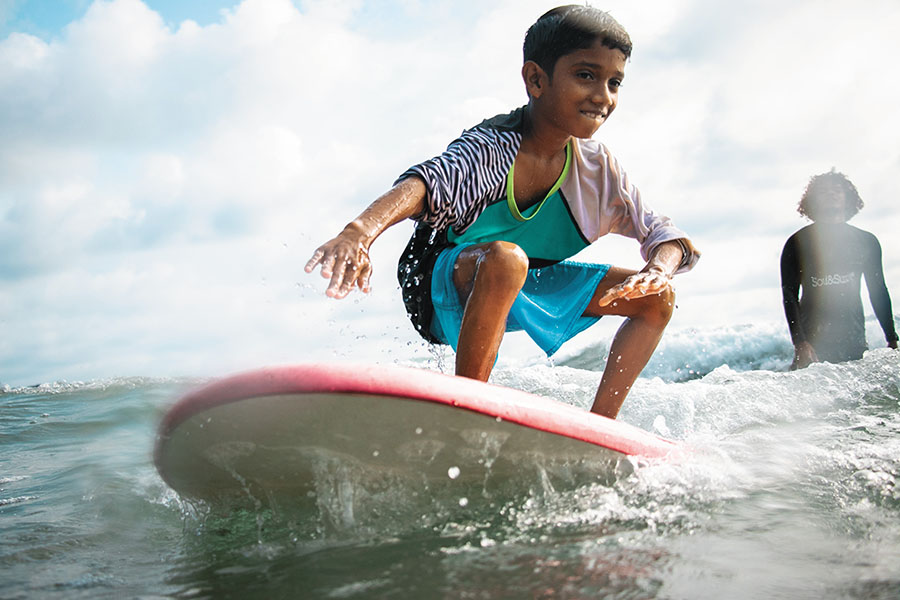 A boy learning how to surf under the guidfance of local surf instructors
Image: Jamie Mitchell

Considered to be one of the oldest surf clubs in India, KSC has taught hundreds of students so far, many of who have gone on to become surf instructors themselves. But things were different a decade ago. Rakhul, a senior instructor at S&S, says, “When I started surfing, locals at the beach would stare at me with amazement. After I finished, they would ask me what kind of motor this piece of board had. They would be shocked and in denial that surfing could be done without any form of engine.” There are some issues, however, that remain. For instance, when it comes to boards, there are not many manufacturers in India. This is a serious inconvenience for the experienced surfers who have to carry their own boards into the country. S&S manager Akhil Vincent says there is only one company in Tamil Nadu, Indi Surfboards, which makes surfboards. Despite the rise of these surfing spots and training schools, not many Indians have taken to the sport. Joel Rollason says one of the reasons could be a lack of awareness and another could be that Indians are not good swimmers, especially in the sea. “It would be helpful if the government recognises the opportunities here and steps in to help,” adds Rigole. Rammohan Paranjape, vice president of the Surfing Federation of India and one of the earliest members of the Mantra Surf Club in Mulki, concurs. “Indians, generally, are not comfortable with being out in the sea and most of them do not know how to swim. This is a disadvantage. In addition, parents are dismissive of girls taking to surfing as they don’t want them to get tanned,” he says. 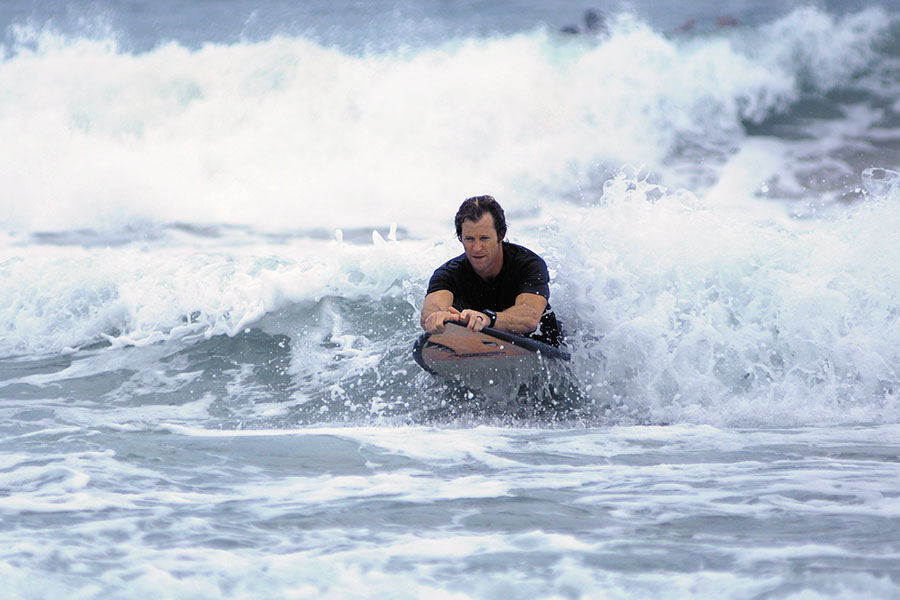 The rise of Varkala as a surfing destination can be attributed to a few reasons. For most of the foreign surfers, it’s the absence of sharks in the water, which is an issue along the Australian coast, and the tropical weather, while for others, India is cheaper than other surfing destinations such as Bali, Sri Lanka, Indonesia and Portugal. “The beaches at Varkala are untouched. It’s important for a surfer to have enough space to be able to move freely and be able to catch more waves. This is not possible in places that are already popular destinations for surfing because they are too crowded,” says surfer and surf photographer Jamie Mitchell, from Cornwall, England. “The Indian coastline is friendly for beginners or intermediate surfers, with swells that are mostly in the 0.5-1.5 metre range,” says Rigole. “The locals are open, welcoming and friendly—on the condition, of course, that we, tourists, behave as respectful guests and respect local customs—and the lifestyle is reasonable and adventurous. To top it off, the possibility of finding empty beaches makes it an attractive place for surfers.” The ideal time for surfing on the country’s west coast is from September to May, after which the entire region shuts shop. This is because of the pre-monsoon and monsoon weather, during which the sea is rough, making it unsuitable for inexperienced surfers. But regardless of that, “The ocean can be treacherous... and no matter how good you think you are at surfing, you will never beat her. So listen to her, know yourself and enjoy surfing,” says Rigole.