The inheritance of flavours

Tracing the food traditions of India’s lesser-known cuisines, in places like Vrindavan and Orchha 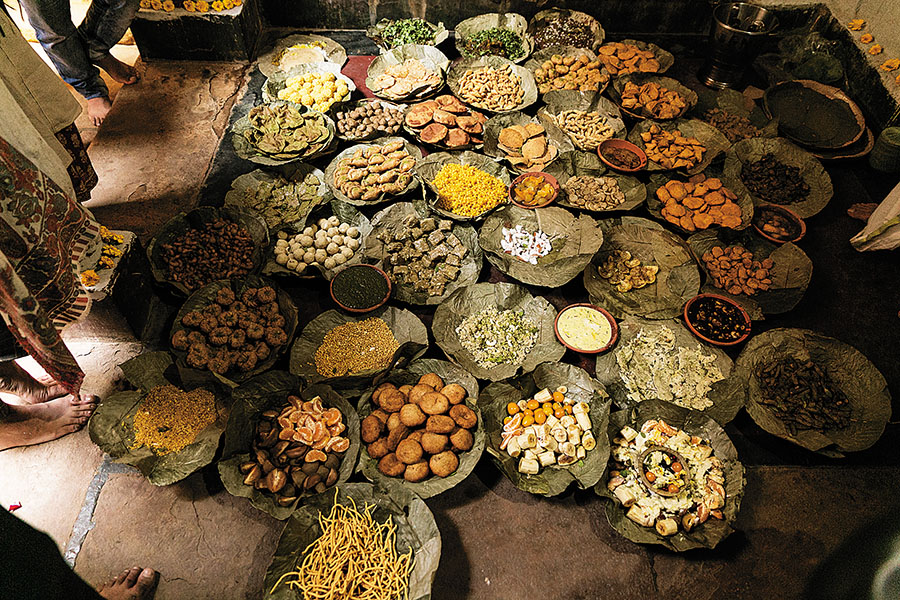 The chhappan bhog is made on special occasions at the Sri Radha Raman temple in Vrindavan
Image: Madhu Kapparath
What was food in India before the Columbian Exchange (the exchange of plants, animals and ideas between the Americas, Europe and Asia in the 15th and 16th centuries) changed global and Indian gastronomy, and gave us ingredients such as potatoes, tomatoes and chillies, without which most modern-day Indian kitchens must flounder? We do get tantalising glimpses every now and then into kitchens of the past. For instance, the venerable food historian KT Achaya records in his book, A Historical Dictionary of Indian Foods, an incident when Warren Hastings, the first British governor of Bengal, visited Avadh in the mid-18th century and was gifted a basket of potatoes—a new, exotic delicacy.

Chillies too are not indigenous to India. Long before their large-scale cultivation thanks to Colonialism, pepper was considered to be black gold. It added heat to dishes and Ayurveda and Unani medicine systems ascribed therapeutic uses to it. The nihari, a pepper-laced stew of Shahjahanabad (as old Delhi was known), was created ostensibly to ward off disease brought by the cold waters of the Yamuna. In other parts of the country, pipli, a long variety of pepper, was used to give mild pungency. It still grows wild in Delhi, Rajasthan and Punjab, though it has fallen out of use in modern kitchens.

To experience one such example of continuity, and get a deeper understanding of lesser known cuisines of India, we head to the famous Sri Radha Raman temple in Vrindavan. The temple, one of the oldest in Vrindavan, was built around 1542 AD, and this is where 10 chefs, as part of my Chefs’ Supper Club initiative, got a sampling of 32 dishes from the bhog, or offering, The food is cooked in a kitchen where the hearth fire has not been put out in more than 450 years. 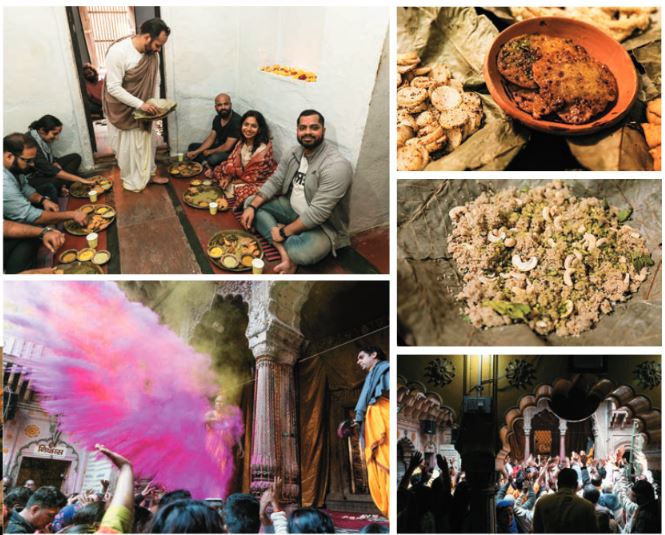 (Clockwise from top) Restaurant chefs sit for a sampling of 32 dishes from the chhappan bhog, a 56-dish spread that includes desserts like malpua and khurchan; devotees gather for the aarti; Holi at the temple
The raj bhog that we sampled is offered to Krishna, the deity of Vrindavan, and his devotees every evening. Sometimes, devotees can sponsor the service and on special occasions, 56 dishes or chhappan bhog are cooked. The 32 dishes that we were offered, on plates made of lotus and saal leaves, included kachori, besan ke sev, malpua (one a dry pancake, the second soaked in syrup), boondi, sweetened bottle gourd mithai, peda, kadhi, colocasia and local bean preparations with hints of turmeric and black pepper, and even mildly-fermented, mildly-spiced pickles made in water instead of  oil. All the food was cooked in ghee, an ingredient that ancient Vedic rituals prized and symbolically elevated as a ‘purifying’ medium.

This strain of thought—of the purifying effects of ghee—is also deeply ingrained in many traditional Indian kitchens. Pucca khana and kaccha khana are the two major categories of food prepared in this ritualistic way—pucca being fried food, sanctified by ghee, kaccha being food cooked primarily in water, like dal or kadhi. 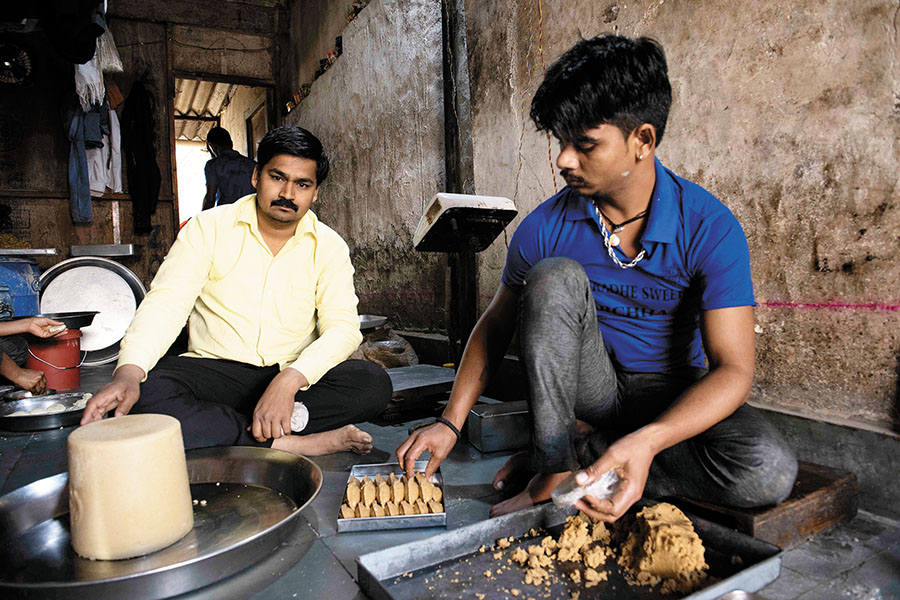 Shree Radhe Sweets in Orchha also makes gluten-free gujiya, a traditional dumpling
Image: Amit Verma
The temple follows this classification, and we get to sample a bit of both. The kaccha khana is cooked while observing strict norms by a goswami—follower of a sect of worshippers of the Bhakti saint Chaitanya Mahaprabhu (1486 –1534)—who left Bengal to rediscover places of religious significance in Vrindavan.

About 300 km away, Orchha in Madhya Pradesh is a little-known town, home to the Rajput Bundela rulers of the 16th century. A fort, temple and cenotaphs are all architectural marvels here, showing a blend of Indo-Islamic influences; the art and ambitions of the rulers, closely allied with the Mughals.

As the Betwa flows quietly past the town, witness to the ebb and flow of history, some things have endured—architecture aside, it is the quaint old food traditions of this town that lead you back to another era. I got a glimpse of some of these while curating the culinary experiences for Namaste Orchha, a recent arts festival, an initiative of Madhya Pradesh Tourism.

Orchha has a solid mithai tradition waiting to be sampled. The gujiya is a dumpling usually served drenched in syrup, but other unique versions, including flourless, gluten-free ones, are available in this town too. Then, there are unique laddoos from soft malai ones made from milk solids to those made from bottle-gourd and even saunth (dried ginger). The latter is apt since this is the ginger belt. In fact, in the local market, you may chance upon lesser-known ginger varieties such as the mango ginger, a rhizome which tastes of green mango. 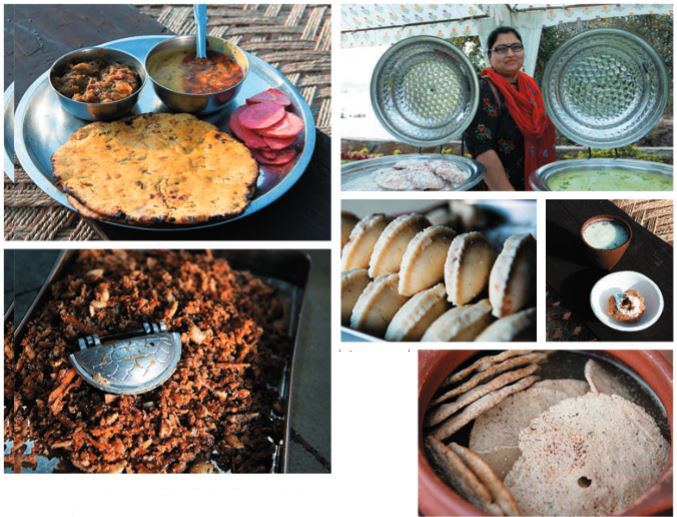 (Clockwise from left) A traditional thali cooked by Vandana Dubey, a local guide-turned-cooking instructor;  Bundelkhandi cuisine, which includes dishes like mangore, sannato, local bada and gujiya, is a study in how seasonal ingredients can make for a flavourful plate

Bundelkhandi cuisine is a study of how seasonal ingredients, sans rich additives, can make for an immensely flavourful plate. Vandana Dubey, a local guide-turned-cooking instructor, serves a thali that includes thadula (the local version of crisp urad dal kachoris), kadhi cooked with brinjal, seasonal vegetables like drumsticks, the local bada (a cousin of the dahi bada but soaked in salt water and thin buttermilk instead of creamy yoghurt), and a fiery chutney made almost like a Mexican salsa.

The Bundeli dialect is colourful and has been the language of poets—from the 12th century Chand Bardai, who wrote about the exploits of Prithviraj Chauhan in his epic Prithviraj Raso. The language lives on, and every now and then, is used to name daily dishes like the sannato, an epithet for a boondi raita with enough spice to make you, literally, go silent.

Then there are mangore, dal fritters seasoned with pounded coriander, available at every tea stall. What is more interesting is the buknu masala they sprinkled on these. I went back home to research this and found it is an ancient  recipe—a mix of five to six spices, of which chief is dried ginger. Bring it back from your travel; sprinkle on your dal or on chaats, for a taste of the past.

Tweets by @forbes_india
Coronavirus timeline: How did we get here?
How RBI's loan extension affects gold, home, personal loans and others