The Azerbaijani capital has preserved its past, while creating a modern identity for itself 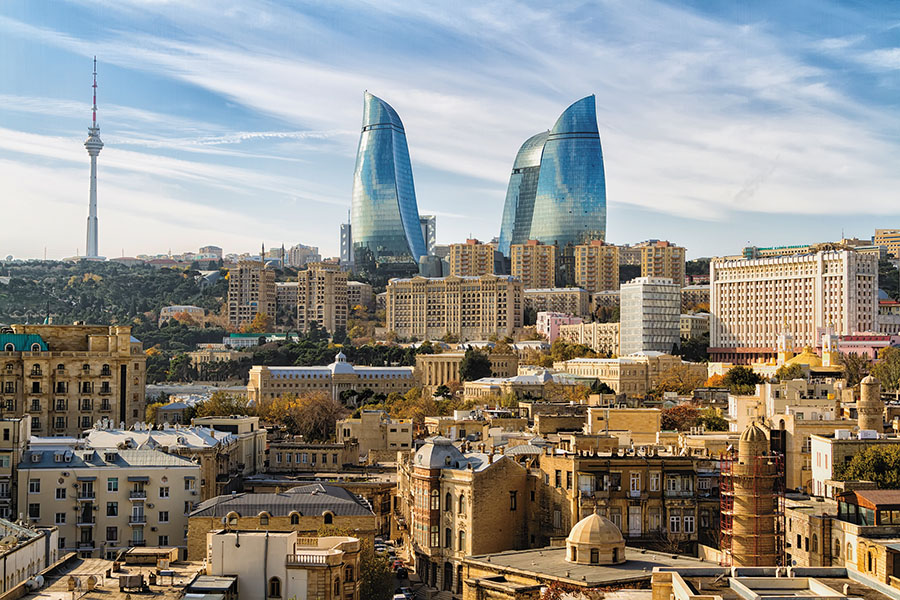 The blue-glass-fronted Flame Towers best represent Azerbaijan, which is famously known as the ‘Land of Fire’
Image: Milosz Maslanka / Shutterstock

Diffidence arising from this incredulous riposte from friends and family to my announcement of visiting the Azerbaijani capital city vaporised the moment I landed at its stunning Heyder Aliyev Airport. Not only is Baku a microcosmic reflection of the south Caucasian country itself, but a befitting gateway to this nation of 10 million people that is powering its rise through rich oil and gas reserves.

An array of ambitious projects are striving to put Baku, a metropolis of over 2 million, on the international map. An award-winning Formula One Grand Prix track, a theatre modelled on the Sydney Opera House, the Caspian Waterfront featuring the vertiginous Baku Eye, and the iconic Flame Towers are some of the attractions for visitors.

Globalised and glamorous, Baku may well be the new Dubai on the Caspian Sea.

Pedestrianised tree-lined avenues, brimming with tony boutiques, and leafy boulevards pepper the city like confetti. Even the wispiest back lanes—paved with asphalt—zip with cars. Glass-fronted towers, wooded parks, Little Venice and the Caspian-front bulvar (promenade), offer a refreshing counterpoint to a desert-ringed landscape.

Modern marvels
Monumental like the Empire State Building in the US, the blue-glass-fronted trio of skyscrapers called Flame Towers best represents Azerbaijan. The country is famously known as the ‘Land of Fire’, being home to ancient Zoroastrian fire temples, and because of the phenomena of ‘burning hillsides’ caused by gas seeping through fissures in the earth. The Flame Towers are also contemporary Baku’s architectural signature, turning into a canvas at night for a laser show depicting leaping flames, pouring water and the country’s national flag by turns.

Few structures, however, encapsulate Baku’s spirit more than the Hyder Aliyev Cultural Centre. An enduring connection with the past and future, it was built in 2007, and is named after the country’s first president. Designed by Iraqi-British architect Zaha Hadid, it houses a concert hall and several exhibition spaces, including a collection of gifts received by the country’s presidents.

“Each part of the Centre’s logo is imbued with a deep meaning,” explains local guide Nijat Ahmadli. “The silver symbolises leadership, struggle and wisdom; the lines signify Azerbaijan’s dynamic development; and the logo represents Azerbaijan’s progress, future and aspirations.”

East meets West
Although several destinations along the Silk Route claim to be an ‘East-meets-West’ location, Azerbaijan may well be the most genuine claimant to that title. Once a meeting point for Asian and Persian merchants on the Silk Route in southern Caucasus, the country has absorbed and assimilated varied cultural influences over centuries. 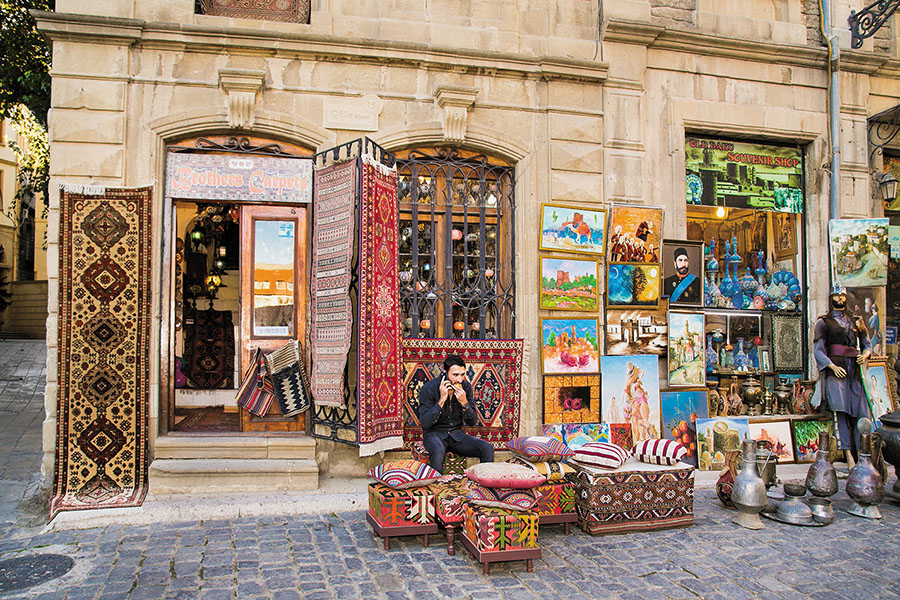 Preserving the country’s ancient history and cultural heritage is thus central to Baku’s narrative. Nothing exemplifies this more than the Unesco-listed Old Town, also called Icheri Sheher, its cavernous, cobblestoned innards filled with heritage buildings, some dating back to the 12th century. Most of its buildings are made of limestone, cut locally and polished smooth to maintain uniformity of colour and design. The roads are maze-like, narrow and winding.

Bustling with eateries, cafes and souvenir kiosks, the area radiates energy. Some of the caravanserais—they functioned as hubs for merchants during the Silk Route days—still stand in their original locations, albeit revamped as fine-dining spots accoutered with rugs and kilims.

The Old City also features tiny bakeries producing delectable goods that sell like, well, hot cakes. The air is perfumed with the toasty aromas of bread baked fresh in clay ovens. Ruddy-cheeked women, their heads swathed in scarves, knead dough, prod clay ovens with sticks, and attend to customers, while posing good-naturedly for photos as well.

I couldn’t get enough of their breads, especially the unctuous, cheese-filled khachapuri. “In Azerbaijan, bread is eaten almost with any food; it is always there on our tables,” says Shahida, the baker, as she offers me a slice of hot tandir bread that has just been pulled out of the oven. Stuffed with white milk cheese (that mimics feta), it was encrusted with fresh, green herbs. Joy!

Preserved past
From the majestic Palace of the Shirvanshahs, a 15th-century structure located in the heart of the city, I soak in a breathtaking view of the city’s rooftops. Built by the rulers of the Shirvan region of Azerbaijan, it was described by Unesco as “one of the pearls of Azerbaijan’s architecture”. The complex comprises the Divanhane, the burial-vaults, the shah’s mosque with a minaret, the mausoleum of medieval scientist and philosopher Seyid Yahya Bakuvi, Murad’s gate, a reservoir and the remnants of a bath house.

Baku’s most defining landmark is the Maiden Tower, a tapering 29-m stone building that looms over Baku Bay. Possibly millennia old, its original date of construction is still the subject of much debate. No one really knows why it was built either. “The tower’s Azeri name is Qız Qalası,” Ahmadli elaborates. As one of Azerbaijan’s national emblems, the monument also appears on its currency notes. “In some legends, the tower was a fire temple that persevered amidst the constantly raging fires of Azerbaijan. Another one states that fire actually incinerated the top of the tower and when a piece of this holy fire fell to the ground, a pretty damsel rose from the flames to save the slaves of Baku,” he adds.

Interestingly, with its triple row of fortress walls, the Maiden Tower and other fortifications—all classified as Unesco heritage sites—the Old City was designed to outwit enemy troops. “Every time foreigners invaded our city, they got lost in these alleys as if falling into a stone trap!” Ahmadli says. 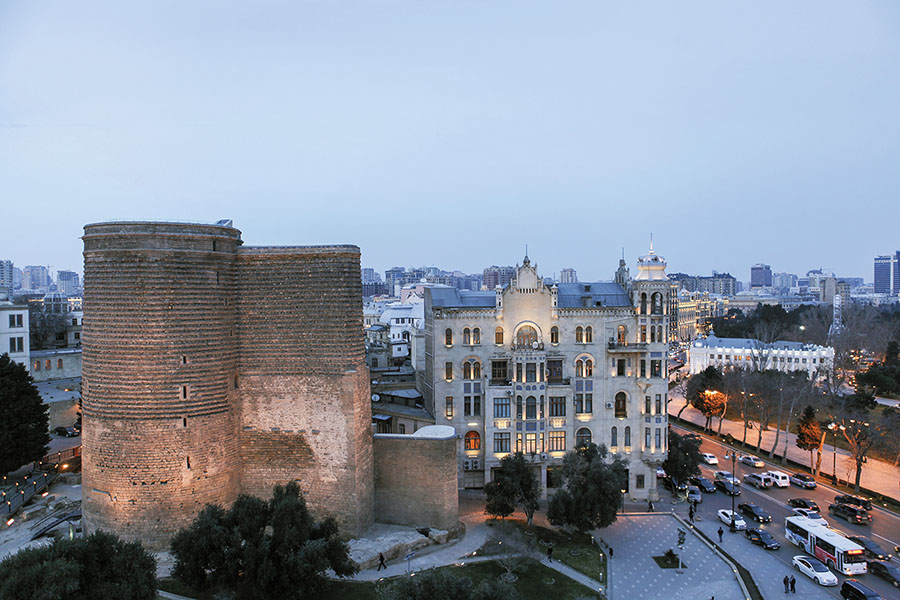 A toast to the coast
The bulvar is the axis around which Baku spins. A handsome promenade built circa 1909, it unfurls along the gritty coastline of the Caspian Sea for several kilometres. Earlier a gathering place for the world’s wealthy oil barons, it now buzzes with strolling families, courting couples, joggers, cyclists and chess players.

The adjoining Caspian Waterfront is a striking new addition to the city’s entertainment scene. It hosts chic cafes, sparkling fountains and canals offering gondola rides. The central sweep of the seafront Bulvar Park is a hub of activity with schoolchildren on excursions, and street musicians. The skyline includes postmodern buildings such as the International Mugam Centre, the Baku Business Centre and the Park Bulvar Mall.

Ambling along the Caspian Sea Boardwalk, as I struggle to keep my hair and clothes in place against a furious wind, the guide explains that Baku is infamously called the ‘City of Pounding Wind’ in Persian. The cold northern wind ‘khazri’ blowing in from the Caspian, and the warm southern wind called ‘gilavar’ stay pretty much throughout the year. The city also experiences fierce winter snow storms and harsh winds, which sometimes reach gale forces of 32 mph or more. Apparently, little can be done about this force of nature as Baku is situated 92 feet below sea level.

Memorable museums
Baku hosts dozens of museums. I look with disbelief at a 2-cm Quran dating to the 17th century at the Museum of Miniature Books. As the only museum in the world displaying tiny tomes, the attraction’s exhibits include the Ramayana as well.

A Guinness Book record-holder, the museum houses the largest number—5,600—of miniature books. The smallest, measuring 6 mm x 9 mm, is a Russian book The Most Miraculous Thing, which can only be read through a magnifying glass! There are petite editions of other Russian authors such as Alexander Pushkin, Fyodor Dostoyevsky, Nikolai Gogol, and Korney Chukovsky. Born out of the private collection of local scholar Zarifa Salahova, the books were amassed over three decades from around the world and are written in numerous languages, including Azeri, Russian, English, and German.

No less intriguing is Baku’s Carpet Museum, the world’s first such museum to showcase over 10,000 carpets and other related artefacts. It opened in 2014 and is designed like a stylised roll of carpet. The complex also functions as a centre for research on textiles and carpets, while acting as a showcase for the carpet weaving skills of Azerbaijani people.

“Carpet weaving is today revered as a symbol of our country,” explains the museum’s guide. “Carpets are used to decorate everything from nomadic huts to palaces, the walls and floors of marquees, as well as people’s homes. From birth to death, carpets remain central to our life as even coffins are lined with them.”

Walking through the museum is like journeying through Azerbaijan itself. The staggering craftsmanship of the carpets, accompanying photographs and interactive displays offer an intimate glimpse into the lives of Azerbaijani people. I pick up a tiny carpet from the museum’s sovenir shop to take it back home. It now rests on my curio rack, a reminder of a unique city that did a splendid job of preserving its past, and is building on its present to burnish its future.