Harsh Mariwala: Ours is the story of a small Indian FMCG player globalising

Harsh Mariwala realised if Marico had to get an international thrust, it needed a manager who wasn’t a part of the local business 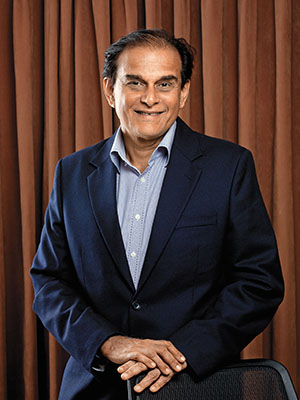 Image: Prasad Gori for Forbes India
Harsh Mariwala started his career with Bombay Oil Industries in 1971. He set up Marico in 1990 and turned a traditional commodity business of coconut oil into a leading consumer products company. Today, in addition to India, Marico is present in 25 countries across South East Asia, Middle East, and Africa

We stepped out of india as marico needed to grow faster. We obviously needed to increase revenues, but a fast-growing company also attracts the best talent. One of the reasons we formed Marico was that we could closely associate the company with the FMCG industry. But we soon realised that as we were a small company, we couldn’t provide the kind of career-rotation opportunities that many large FMCG companies provided. And most importantly, we couldn’t rotate talent outside of India. Ours is the story of a small Indian FMCG player globalising. Over the years, analysts have often asked me why we are operating outside of India when the opportunity in India is huge.


My answer to that is simple: We are not growing our international business at the cost of our domestic business. Today, at approximately Rs 1,200 crore, our international business brings in a fourth of our revenues and we employ a total of 800 people overseas. When we first wanted to export, we couldn’t do so as export of coconut oil was banned. When the government started opening up the economy in 1991, we were able to persuade them to allow us to export.

Initially we started exporting to the Middle East and then to Indians settled outside India, mainly the US. We kept this as a part of the domestic business but we realised that this being a much smaller business, there were too many escape buttons for our managers. As this contributed very little to our top line, managers would often not pay enough attention to it. Initially businesses have to be nurtured and I believe that you need to be able to take losses for the first three to four years. So, within one or two years we realised that international is not getting any major thrust from the local team and if we really have to give it a thrust, we have to give it to someone who is not in charge of the domestic business.

The main challenge was: How do we remove the escape buttons? The only way to do this is to give individuals the opportunity to grow businesses from a very low base.

That’s how we gave it to somebody outside the domestic team. Looking back, that was a good decision as we gave the role to someone at a senior level who had the hunger and desperation to grow. Soon, we exhausted our opportunities in the Middle East and had to focus on a new set of markets. We began our second phase of international growth when we went into markets without an Indian population that used coconut oil.

Bangladesh was the first such market we entered. For starters, we converted the market from tin to plastic. We had to build a distribution network from scratch. The key decision we took was building volumes rather than a factory. In the first three or four years, it is okay if you don’t make any money. We supplied from here. When we got market share we set up a factory. Today we are India’s largest listed company on the Dhaka Stock Exchange.

Once we finished with markets that had Indian expats and markets that used coconut oil, we decided to focus on inorganic growth. And here we made a huge mistake. We went and acquired a company, Sundari, in USA. It dealt with Ayurvedic formulations and supplied its products to spas. That was a B2B business and it was not something we had experience in. We floundered and had to sell the business a few years later.

Thereafter, we decided to return to our FMCG knitting and did some scoping studies in Asia and Africa and identified markets that had a population between 50 million and 200 million, were growing, were politically stable and had similar distribution networks. In addition to this, we said that we would get into allied products like hair gels. Thereafter we’d send teams to these markets and started working with our investment bankers to make acquisitions. We were very clear that these businesses would be over-invested in. Brands were supported for three years before they turned a profit.

One of the toughest positions we faced was in Egypt. Here we acquired two companies. One of them had very poor corporate governance standards and most of the business was done in cash. This is where being an entrepreneur helped, as I could take a gut-driven call and decided to go ahead with the deal. But once we took over, there was no compromise. We had to move everything from cash to billings and the entire management was changed. There was a lot of opposition. We lost some business in the first two years and a change of management had to be done. Once we gained confidence in operating in Egypt, which was a different culture, business environment and so on, we made acquisitions in South Africa, Vietnam and Malaysia.

In South Africa, we identified a company that is into ethnic hair care. Then we said, can we go beyond hair care into the related male grooming category?  We identified a company in Vietnam and took substantial stake. In Malaysia, we identified a hair care brand that was with Colgate Palmolive but being neglected by them; so we acquired that. These businesses taught us that we needed to get into these categories in India as well. That opportunity came last year when we acquired three personal care brands from Paras.

So, from our Malaysian business we have transferred some formulations to India for our Set Wet brand. We’ve also learnt the pace of innovation in the personal care business needs to be a lot faster. Product packaging and fragrances have to be changed every few months. Our international operations are now mature businesses in themselves. Earlier this year, we went ahead and integrated our international and domestic operations, completing the circle.

Tweets by @forbes_india
Snapshots of the Fortnight (May 15-30)
Rashesh Shah: Every setback is an opportunity to recalibrate