Rashesh Shah: Every setback is an opportunity to recalibrate

Edelweiss Group’s Rashesh Shah recalls the crises he faced in setting up his business, and how he turned them into opportunities 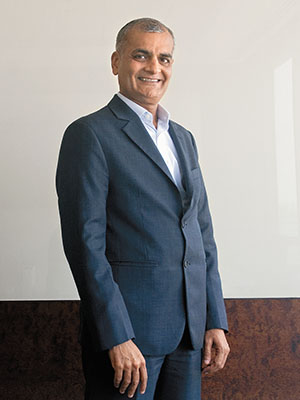 Image: Vikas Khot
Rashesh Shah co-founded Edelweiss in 1996, after working for ICICI. He has seen the financial services industry grow in India for more than 20 years, and turned Edelweiss from a Rs 1-crore firm into a Rs 3,000-crore firm. An IIM graduate, he has advised the National Stock Exchange, Ficci and Assocham, among others. One of the fittest CEOs around, he has evolved from running marathons to doing triathlons

Have you seen batman? in the movie, the butler Alfred asks young Bruce Wayne something profound, “Why do we fall, sir? So we can learn to pick ourselves up.” Every setback is an opportunity. When we started Edelweiss in 1996, we wanted to be a Category-1 merchant bank. There were more than 440 such banks, we wanted to be the 441st. At that time, the rule was you had to have a net worth of Rs 1 crore to qualify as a merchant banker.

Initially, my co-founder Venkat Ramaswamy and I were only able to pool together about Rs 50 lakh from our own savings. We spent almost six months convincing our families: I took a Rs 25 lakh loan from Citibank and mortgaged my house, and Venkat borrowed some money from his father. We somehow managed to scrape together the additional Rs 50 lakh we needed to apply for the licence. We thought we would be a merchant bank doing IPOs, right issues and things like that. And just as we were making our application to Sebi, the rules changed to a minimum capital requirement of Rs 5 crore!

Our entire business plan went out of the window. I was in shock for weeks. We managed to go from Rs 50 lakh to Rs 1 crore by fighting for each lakh, but Rs 5 crore was impossible. After cajoling and convincing our families for additional capital, I learned that things can change in a jiffy.

Only in 2000 did we cross the Rs 5 crore capital mark, and finally become a Category-1 merchant bank. But in those five years, the work we did was pure advisory instead of focusing on equity capital markets. Advisory became our calling card and we became market leaders. We were advising on private equity when there was no private equity in India.

It was the crisis that made us create this new business model. Every setback is an opportunity to recalibrate, and fortunately in India there’s always an opportunity. I believe if one window closes, three will open up. You need to have the conviction that there are other windows out there and look for them.

We didn’t flick the switch in one day: As the weeks passed and we went ahead with our business, we realised there was a lot of advisory work that wasn’t Category-1. Within a year, we were advising at least five companies on private equity and a couple more on M&A. There was a business model there. The experience hardened us and helped us grow. We now see change as an opportunity. Looking back, now it seems small, but back then it was an existential issue.

It was yet another crisis that made us evolve again. During the 2000 dotcom bubble, we saw ourselves as a technology specialist with a focus on BPOs. But, as the bubble burst in 2001, we had to rethink our strategy once more. But this time it was easier. We expanded from a pure advisory investment bank to a broad-based capital markets firm.

It has become a theme for us: Every time there is a setback, we use it as an opportunity to expand the business model by taking big operational risks as opposed to financial risks. Operating risk means hiring the right people and investing in them.

When the tech bubble burst, we had 10 people. A year later, after the business had totally collapsed and 9/11 had happened, we had 40. We acquired a broking arm, we started the futures and options equities and derivatives, and became market leaders in that; we set up an analytics team for equities and raised some risk capital.

After a setback, the normal human instinct is to go back into a shell, hunker down and protect what you have. But we use it as an opportunity to quietly and sensibly discover which new windows have opened up.

The fact that we had opened those windows helped us scale up when the growth came back. Instead of hunkering down, we said, “Let’s take calculated risks in adjacent markets.”

There are a number of ways to keep your head and stay grounded in times of extreme growth:

In 2008, we took the opportunity to expand from a capital markets firm to a full scale financial services firm. We had 1,800 people when the [economic] crisis hit and our numbers went down to 1,400 people. We now have 4,000 people. We have added insurance, housing finance, commodities and wholesale credit. In the last year, we’ve started seeing growth coming back and we’ve added 800 people.

There’s a common pattern: We face a setback, we spend two to three years re-engineering ourselves, and then expand into the opportunities India offers.

That being said, there’s no handbook to expansion. We have all the formulas, but not the answers. There’s a reason my hair is greying! If I could change something now, I would create a much stronger planning system. Each time the macro-economic environment changed, we had to adapt. I would do a lot more scenario planning so that we are not just reacting; we can’t depend on instinct alone.

Even initially, when we were going after the Category-1 licence, we didn’t have a plan B. But that was with three people. When you have 4,000 people, you can’t take that risk. In India, things can change, so you need a plan B, C and D!

Financial markets in India are still underdeveloped and there are so many opportunities out there. For us, it’s like going to a buffet: You have to decide how much you’re going to eat and how much you can eat.

There’s no shortage of competition. We are the 24th insurance company. One of the things we believe is that legacy can be a handicap and sometimes it’s easier to start afresh. It’s hard for an old business to reinvent itself and so any new entrant has a set of advantages over an existing player.

You cannot be the 24th insurance company doing what the top 10 are doing. You can leapfrog them in technology, for example. Being a ‘me too’ and copying someone else is dangerous. There’s always an opportunity as the new guy.

We started with a crore of rupees and we’re now at Rs 3,000 crore. We’ve ridden the India wave and had our good fortune. One should be humble and balanced. There are always things you’re unhappy about, but one needs to reflect on the good things. There’s an element of good luck in all our achievement.

And although I have been fortunate enough to find time for myself and my family amidst all this, there has been one fall-out of my business in my personal life: It was the learning that sometimes you have to make a trade-off between friends and clients.

I think, ultimately, business comes first. After all, it’s not my company! The best way not to carry stress into your personal life is to plan your work well. If you think you’re indispensable to the company and you need to micro-manage everything, you’re setting yourself up for stress.

Stress is the reason I would also invest more in people. People are the engine, they will bring in capital, technology and solutions. People are not something you can over-invest in. A good team can lower your stress levels as you let them put out fires.

Striking a work-life balance becomes easier as you get older. You have to have very clear priorities: I make sure I spend enough time swimming, running and spending time with my family. In our company, the more senior you get, the less you multi-task.

When I see a CEO frantically multi-tasking, I see an unorganised person and an unorganised company. I insist on all our senior management members taking two holidays a year with their families.

I admire CEOs who are well planned: How much of your time goes into planning and how much into fire-fighting? In our way of doing things, the more time you spend fighting fires the more unorganised you are. You need to have the systems in place to deal with crises.

Ultimately it’s all psychological. We learnt new things and created a market out of it. We had clients who would come to us with a State Bank of India loan application to raise private equity money! There was no concept of an info-memo.

I personally wrote one for a client and he was shocked: It had a business plan, the company vision and financial models. It was the same when we got into derivatives. Institutional brokers were still focussed on cash equities.

As the new guy, you have a chance because you’ve changed the market and, subsequently, demand, ever so slightly.

Tweets by @forbes_india
Harsh Mariwala: Ours is the story of a small Indian FMCG player globalising
Kiran Mazumdar-Shaw: Instead of having bad blood with a good company,I decided to part amicably