Kiran Mazumdar-Shaw: Instead of having bad blood with a good company,I decided to part amicably 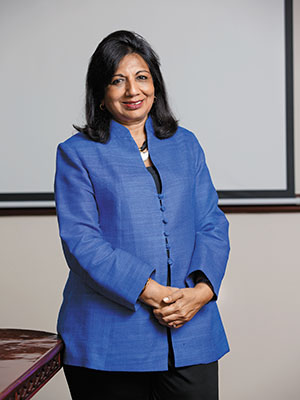 Image: Mallikarjun Katakol for Forbes India
Kiran Mazumdar-Shaw is the chairman and managing director of Biocon, a company she founded in 1978. Over the years, she’s transformed the industrial enzyme company into an integrated biopharmaceutical business that focuses on key therpeutic areas of diabetes, oncology and auto-immune diseases. Along the way, she also set up two subsidiaries—Syngene and Clinigene

Biocon’s journey in the insulin space was itself an inflection point at that time. When we chose to transform ourselves from enzymes to a biopharmaceutical company, we decided to leverage the existing enzyme technologies. Pichia technology was one of them—a platform to which a simple peptide like insulin lent itself easily. We could have done many things with it, developed many proteins but we chose insulin. The rationale was simple: Diabetes is a pandemic, there’s unmet need in India, and the cost of therapy [is high].


After we developed the product and brought Insugen to the Indian market, we decided to go beyond and look at human insulin analogues. We picked three of them. Gradually we realised that we had embarked on a differentiated portfolio, as nobody in the world was using this technology—yeast expression system—to produce insulin. We also had scope for intellectual property because in biopharma, process patent is also valuable. Our strategy got validated as we were approached by quite a few big [pharma] companies who wanted to partner with us on this programme.

Pfizer was one such company which at that time was looking at new strategies for growth. They found that our insulin programme fitted well with their biosimilars strategy. Pfizer did thorough due diligence on us. The agreement was signed in October 2010. It was a historic deal for us, which was also big in the eyes of the market [shares rose 11.2 percent to an all-time high] as we had disclosed that we got upfront payment of $100 million with yet another $100 million in the Escrow account. It had provisions for additional $150 million in milestone payments, all adding up to $350 million.

A structure was put in place with a joint steering committee. Pfizer was developing the strategy, we were executing it. One year on, this internal review of Pfizer surfaced where their biosimilars team revisited the financials of our deal. When you sign a deal, it’s usually the business development team which does number-crunching. But when the marketing team looked at it, specifically at the assumptions in the deal, they said they wanted bigger discounts and that the financial terms needed to be renegotiated.

I said, ‘I really don’t think so.’ I believed that as partners, we could sit together and do whatever was right for the partnership, make it work. But they were adamant on renegotiating the terms. I wasn’t willing to renegotiate on a set of unknowns. There was no guarantee that by renegotiating now it won’t open up for renegotiation later. I thought, instead of having bad blood with a good company, whom I respect a lot, why not part amicably. In March 2012, the deal came unstuck.

In all fairness, Pfizer was very decent about it. We told them they had to leave us with enough money to continue the programme because we had chosen them over other partners. Moreover, both of us knew there’d be many questions asked, aspersions cast and perceptions on quality would change. They understood and we got to keep nearly $160 million. But we still had huge value erosion. Stocks crashed [to a 52-week low]; it still hasn’t recovered.

We had to deal with it. My competitors in the Indian market started spreading all kinds of rumours that Biocon has quality issues with its insulin analogues. It didn’t deter me though. We had the money and we moved on. Many people also said that we had stalled the construction of the Malaysian facility, not caring to know that the expansion of insulin manufacturing to Malaysia came before Pfizer.

Then Mylan came into the scene. We already had an ongoing development partnership with them for monoclonal antibodies and the company now showed interest to co-develop insulin analogues with us. Mylan being an aggressive generics company, we thought it’d be a partnership of equals, unlike the Pfizer deal where they didn’t share much on what they were doing in terms of strategy. They’d say, ‘This is how we feel and this is what we’d like to discuss.’ We thought maybe we could get more out of this [Mylan] partnership. Unlike the previous deal where Pfizer would give us royalty on sales, Mylan agreement involves profit-sharing. Since the cost of development is huge, $150 for the three insulin products, Mylan is sharing a chunk of it. It is also contributing to our Malaysian facility. As a result, whatever money we could free up, we’ve put back in the business as profits, which is why you see a spike in our numbers in this quarter. Whatever people may say, I think such break-ups are a part of doing business. Big companies’ strategies change overnight. I am used to it. Don’t forget, when I was in the enzyme business, I had Unilever as my partner, and an investment partner at that. As a small company, you don’t have much say.

Coincidentally, while Pfizer pulled out of us, we pulled out of AxiCorp. We had invested in the German company to make it a marketing front for insulin products in Europe. But due to the German government’s forced discounting of pharmaceuticals, its profit margins were becoming wafer thin, to the extent that we feared we might have to bear losses. So we decided to come out of the partnership thinking that when the products are ready we can always hire afresh and market it ourselves.

These things happen. It’s not that ‘never again will I do such a deal’. The learning is: Be prepared, there could be a blip in your stocks and if you believe in your assets, it’ll still work for you. Both Pfizer and Biocon decided the less said about [the broken deal] the better. But if tomorrow Pfizer comes for another asset, we’ll of course do a deal together.

Tweets by @forbes_india
Rashesh Shah: Every setback is an opportunity to recalibrate
Translating Ideas into Reality