It is an enterprise encompassing an army of private secretaries, communications advisers, heads of households, chauffeurs, footmen, domestic servants, gardeners and all the other people who run the palaces, and the lives, of the royals who live in them. 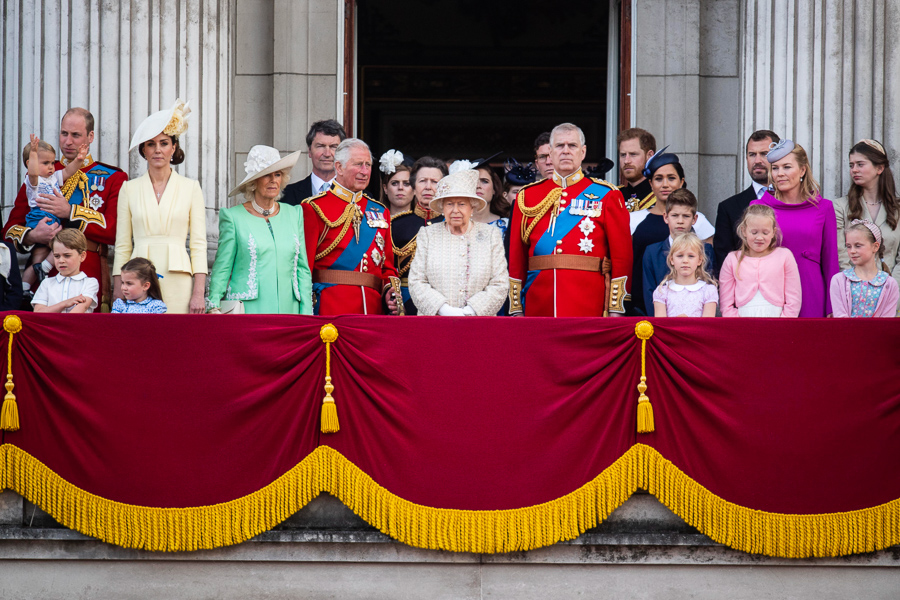 A file photo of Queen Elizabeth II and members of the royal family on the balcony of Buckingham Place after 'Trooping the Colour' ceremony, as she celebrates her official birthday. Photo : Victoria Jones/PA Images via Getty Images

When Prince Harry’s wife, Meghan, referred to the British royal family as “the Firm” in their dramatic interview with Oprah Winfrey on Sunday, she evoked an institution that is as much a business as a fantasy. It is now a business in crisis, after the couple leveled charges of racism and cruelty against members of the family. Buckingham Palace responded on Tuesday that “the whole family is saddened to learn the full extent of how challenging the last few years have been for Harry and Meghan.” The allegations of racism, the palace statement said, were “concerning,” and “while some recollections may vary, they are taken very seriously and will be addressed by the family privately.” Harry and Meghan’s story, of course, is a traumatic personal drama — of fathers and sons, brothers and wives, falling out over slights, real or imagined. But it is also a workplace story — the struggles of a glamorous, independent outsider joining an established, hidebound and sometimes baffling family firm.
The term is often linked to Queen Elizabeth’s husband, Prince Philip, who popularized its use. But it dates further back, to the queen’s father, King George VI, who was once reported to have declared, “We’re not a family. We’re a firm.” It is an enterprise that reaches well beyond the royals themselves, encompassing an army of private secretaries, communications advisers, ladies in waiting, heads of households, chauffeurs, footmen, domestic servants, gardeners and all the other people who run the palaces, and the lives, of the royals who live in them. Buckingham Palace alone has more than 400 employees, who operate everything from a vast catering business for the dozens of banquets, garden parties and state dinners hosted by the queen, to a corporate-style public-relations apparatus, its members frequently drawn from the worlds of journalism or politics.
“It’s very hard to differentiate between the family and the machine,” said Penny Junor, a royal historian who wrote “The Firm: The Troubled Life of the House of Windsor.” Family members, she noted, use private secretaries for tasks as personal as inviting their parents or children over for dinner. “This is not a family that is good at communicating with each other,” Junor said. “They are certainly not good at looking after one another.” In explaining their reasons for leaving, Harry and Meghan, also known as the Duke and Duchess of Sussex, often cited this bureaucracy rather than their close relatives. The palace’s communications staff members did not defend Meghan from scurrilous press reports, they said. Advisers told her she should not go out to lunch with her friends because she was overexposed, even though she had only left Kensington Palace twice in four months. Harry described a kind of royal deep state that permeates all aspects of daily life and imprisons even family members, like Prince Charles and Prince William, who appear at ease within its confines. “My father and my brother, they are trapped,” he said to Winfrey. “They don’t get to leave. And I have huge compassion for that.” The power of the palace bureaucracy broke into view days before the interview when The Times of London reported that Meghan had bullied members of her staff, reducing junior aides to tears and driving two personal assistants from their jobs. A spokesman for Meghan dismissed the allegations as “character assassination.” The Times of London said that a former communications secretary to the couple, Jason Knauf, put his concerns about the mistreatment in an email to the private secretary for Prince William, Simon Case. Case referred the matter to the palace’s human resources department, which did not act on it. Case is now the Cabinet secretary, a senior policy adviser to the prime minister and one of the most powerful administrative posts in the British government. The Times report cast an unfamiliar light on Buckingham Palace as a place of employment rather than a world-famous tourist destination. Like any other employer, the palace posts job listings: It is currently looking for a digital learning adviser, a position that starts at 30,000 pounds, or $41,660, a year. “It’s becoming part of something special,” the online listing said. “This is what it feels like to work for the Royal Household.” Among the fringe benefits of working in the palace is free lunch. The most senior advisers to the royals are especially coveted posts, often attracting people from the ranks of the military or the foreign service, some of whom are seconded to the palace and return to their career tracks. As their last private secretary, Harry and Meghan recruited Fiona Mcilwham, who had served as the youngest British ambassador in history, to Albania. Another former communications secretary, Sara Latham, was a White House aide and later worked for Hillary Clinton’s 2016 presidential campaign. But Harry and Meghan had a vexed relationship with their staff, according to several people with ties to the palace — one that was complicated by the fact that they initially shared staff and quarters at Kensington Palace with William and his wife, Kate.

Even after the brothers separated their staffs, relations with aides were turbulent, often over unflattering news coverage of Meghan. The couple gave their staff little advance notice when they announced in January 2020 that they planned to pull back from their duties and leave Britain, resulting in the staff’s dismissal.
Tensions flared not only within the couple’s staff but also with the family’s other royal households, at Buckingham Palace, where the queen’s staff is based, and at Clarence House, the residence of Prince Charles.
Press relations are at the heart of the conflict between the couple and the family. Despite his own difficult personal history, Prince Charles has cultivated better relations with Britain’s tabloid press than Harry and Meghan, who have cut off the tabloids and filed privacy lawsuits against several of them. Harry, who blames the ravenous press coverage of his mother, Diana, for her death in a car crash in Paris in 1997, described an “invisible contract” between the family and the tabloids. “If you as a family member are willing to wine, dine and give full access to these reporters,” he said, “then you will get better press.”
He said his father and other family members were terrified that the tabloids would turn on them. The monarchy’s survival, he said, hinged on maintaining a certain image with the British people, one that is propagated by the mass-market tabloids. Like the White House, the palace gives access to a rotation of royal reporters, who document the queen’s meetings and ceremonies. “There is a level of control by fear that has existed for generations,” Harry said. “I mean, generations.” It is true, historians said, that the relationship between the royal family and the tabloids dates back to the 1920s. The transaction has often been mutually beneficial: The royal family has gotten exposure for its activities, helping to justify its publicly funded security and other expenses. The tabloids have gotten a steady parade of princes and princesses, dukes and duchesses, to sell papers. With the arrival of Rupert Murdoch in the 1970s, press coverage of the royals became more intrusive and harder-edged. Harry’s lawsuit against Murdoch’s Sun newspaper alleges that his cellphone was hacked, while Meghan recently won a judgment against The Mail on Sunday for illegally publishing a private letter that she had sent her estranged father, Thomas Markle. The couple’s interview claimed a prominent media casualty on Tuesday when Piers Morgan, the co-host of “Good Morning Britain” on ITV news, abruptly resigned. Morgan, a strident critic of the couple, said he “didn’t believe a word” of the interview, even Meghan’s confession to having had suicidal thoughts — which prompted more than 41,000 complaints to Britain’s communications regulator. “The monarchy can’t survive without the media, but how do you manage that media?” said Edward Owens, a historian and the author of “The Family Firm. Monarchy, Mass Media and the British Public, 1932-53.” Harry and Meghan, Owens said, are the latest in a long line of royals whose personal anguish has been portrayed as the cost of doing their royal duty. That sacrifice, he said, was an unavoidable part of what George VI meant by being part of the Firm. And it served as a justification to the public for the perks of the job. “The Firm suggests that these bonds of family are an afterthought,” Owens said. “It is duty and the business of the royal family that comes first.”

Tweets by @forbesindia
Photo of the Day: Hear her roar
Maker of Dove soap will drop the word 'Normal' from beauty products