By Erin Griffith and Lauren Hirsch 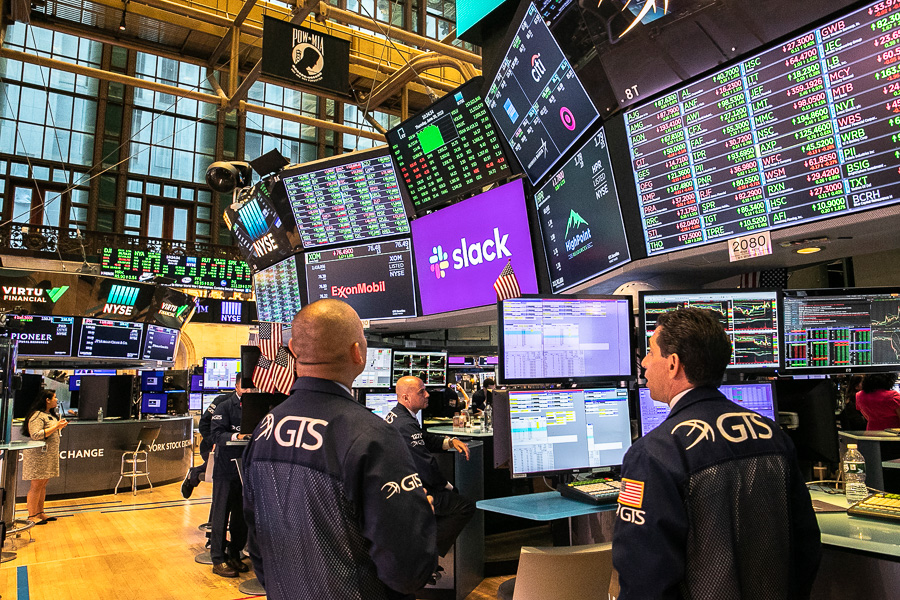 The New York Stock Exchange floor on the day of the initial public offering of Slack, the workplace collaboration company, in Manhattan, June 20, 2019. Salesforce on Tuesday, Dec. 1, 2020, said it would buy the workplace software company Slack for $27.7 billion in cash and stock, the latest in a wave of deals as the coronavirus pandemic boosts demand for tools that enable people to work remotely.
Image: Brittainy Newman/The New York Times

SAN FRANCISCO — Salesforce on Tuesday said it would buy the workplace software company Slack for $27.7 billion in cash and stock, the latest in a wave of deals as the coronavirus pandemic boosts demand for tools that enable people to work remotely. If completed, the acquisition would mark the end of Slack’s brief run as an independent publicly traded company — it went public in mid-2019 — and cap an acquisitive streak by Salesforce with its largest deal since it was founded 21 years ago. The deal is the biggest bet among a recent spate of acquisitions made by tech companies to capitalize on the shift to remote work. Adobe last month said it planned to acquire the workforce management software company Workfront for $1.5 billion. In July, Atlassian, which sells tools for developers and project management, said it would buy the enterprise services business Mindville for an undisclosed amount. Other firms focused on workplace collaboration products, including Airtable, Asana, Box, DocuSign, Dropbox and Smartsheet, may also be potential targets as highly valued software companies look to roll up the fragmented market for collaboration tools. The Salesforce deal for Slack shows how competitive the software market has become, said Logan Purk, a senior analyst with financial advisory firm Edward Jones. Without a “game-changing product” and a lot of capital, he said, “you’re going to get swallowed up or you’re going to fail.” Slack, which was founded in 2010 by Stewart Butterfield, its chief executive, grew quickly and has attracted — and rejected — takeover offers from the likes of Google, Microsoft and Amazon. Its valuation was about $19.5 billion when it went public last year, but its shares later sank. Demand for Slack’s products, which allow people to communicate and collaborate with one another, has increased as people work from home during the pandemic. While the company said in September that revenue rose 49% to $216 million in the quarter ending in July and that the pandemic had created a “significant increase in demand and usage of Slack,” it also said it did not expect that rise to continue. Layoffs at some of its customers have hurt its business, the company said. At the same time, Slack has faced increasing competitive pressure from Microsoft. Teams, Microsoft’s collaboration product, reported 115 million daily users in October, up 50% from April. Slack has not provided an update on the 12 million daily users it reported a year ago. In July, Slack filed a complaint against Microsoft with the European Commission, claiming Microsoft had unfairly bundled Teams with its suite of Microsoft Office work products. Microsoft has offered the software alongside Office since Teams was released in 2017. “When you’re a scrappy startup going against an 800-pound gorilla that’s one of the most well-capitalized companies in existence, its tough to compete,” Purk said of Slack. “This is more or less saying, ‘We can’t compete with Microsoft Teams anymore. We need more firepower.’ ” This year, Slack’s shares were up roughly 25%, though they remained below the level of the company’s public market debut, before news of a deal with Salesforce broke last week. Since the news, Slack’s value has risen to more than $25 billion. Salesforce, which provides marketing and sales software, among other products, has been highly acquisitive as it looks to grow. Under Marc Benioff, its chief executive, Salesforce has bought at least 60 companies, including 27 in the past five years, according to S&P Capital IQ. Its stock has climbed nearly 40% this year, valuing the company at $220 billion. In February, Salesforce paid $1.3 billion for Vlocity, a mobile software provider. Last year, it bought Tableau, a data analytics provider, for $15.3 billion; in 2018, it bought MuleSoft, a data integration company, for $6.5 billion; and in 2016, it bought Demandware, an e-commerce software maker, for $2.8 billion. It also invested $250 million in the data warehousing company Snowflake just before it went public in September. Salesforce has had its own work collaboration product, called Chatter, since 2010. Chatter has had “limited traction,” according to a Goldman Sachs report last week that touted the “strategic merit” of Salesforce buying Slack. In August, Benioff told analysts that Salesforce was not seeking acquisitions, implying that valuations were too high. “We’re not in a good M&A environment,” he said, referring to mergers and acquisitions. “I just don’t see it.” He added: “Maybe things could change." In September, Mark Hawkins, Salesforce’s chief financial officer, told analysts that the company would continue to be “opportunistic” with respect to deals.