Robert Cahaly's polls have Arizona, Michigan and Florida in the president's column. It's hard to find another pollster who agrees with him. But they didn't believe him in 2016 either

By Giovanni Russonello and Sarah Lyall 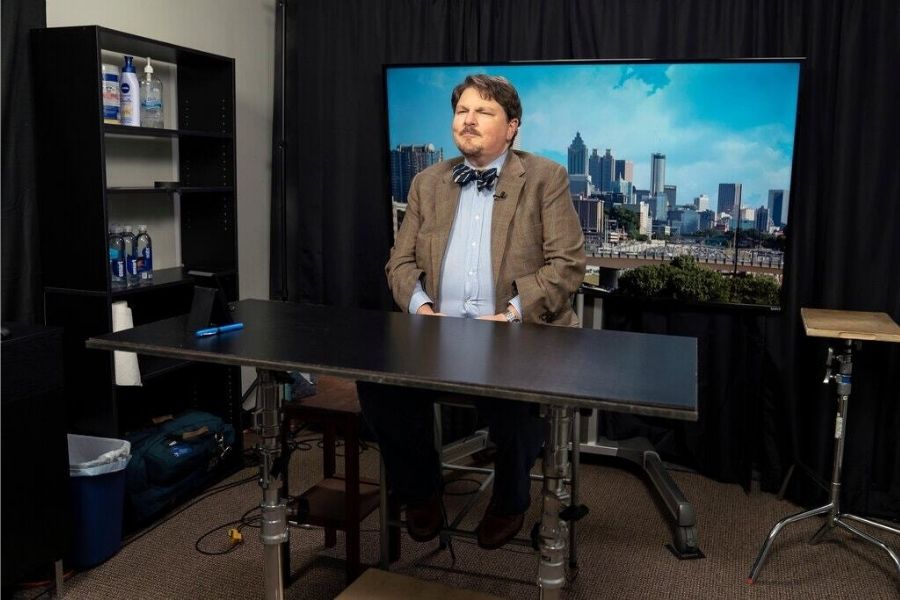 If President Trump pieces together an Electoral College win on Tuesday, at least one pollster — and perhaps only one — will be able to say, “I told you so.”

That person is Robert Cahaly, whose Trafalgar Group this year has released a consistent stream of battleground-state polls showing the president highly competitive against Joseph R. Biden Jr., and often out ahead, in states where most other pollsters have shown a steady Biden lead.

Trafalgar does not disclose its methods, and is considered far too shadowy by other pollsters to be taken seriously. Mostly, they dismiss it as an outlier. But for Mr. Cahaly, “I told you so” is already a calling card.

In 2016, its first time publicly releasing polls, Trafalgar was the firm whose state surveys most effectively presaged Mr. Trump’s upset win. A veteran Republican strategist, Mr. Cahaly even called the exact number of Electoral College votes that Mr. Trump and Hillary Clinton would receive — 306 to 227 — although his prediction of which states would get them there was just slightly off.

So with liberal anxieties flaring over whether to trust the polls, the gregarious, goatee-and-bowtie-wearing Mr. Cahaly has been in demand on cable news lately. In addition to frequent appearances on Fox News, Mr. Cahaly was on CNN last week, explaining to Michael Smerconish why he thought the president would walk away with an easy victory — and defending himself against a battery of critiques that Mr. Smerconish called up, one by one, from Mr. Cahaly’s peers.

Amid a crush of pre-election media coverage seeking his theory of the case — it drove more than 1.5 million clicks to Trafalgar’s site on Monday, he said — the big question seems to be: Is it possible to believe a guy whose polls consistently give Mr. Trump just enough support for a narrow lead in most swing states, and who refuses to reveal much of anything about how he gets his data?

In his last few polls of this election season, Mr. Cahaly has found Mr. Trump with two-to-three-point advantages in North Carolina, Arizona, Michigan and Florida, and wider leads elsewhere. That puts him far out of line with almost all major pollsters, whose surveys in those states are generally showing Mr. Biden with the edge. As different as things are this year, it’s hard to miss the echo of 2016, when Trafalgar occupied a similarly lonely position on the eve of Nov. 8.

Above all, Mr. Cahaly’s approach centers on the belief that everyone lies, but especially conservatives. This has largely been disproved by social science, but that hasn’t softened his conviction. To hear him explain it, traditional pollsters (he calls them “dinosaurs”) are crippled by “social desirability bias”: the tendency for respondents to say what they think an interviewer wants to hear, not what they actually believe. In Mr. Trump’s America, he says, that problem has grown worse.

“I just think people are not what they say they are, ever,” Mr. Cahaly said in a recent phone interview from Atlanta, where he lives. “We cannot eliminate the social desirability bias, we can only minimize it.”

Four years ago, he addressed this by asking people both whom they would support for president and whom they thought their neighbors would support. This year, he said, he is using other means to achieve the same result.

But he’s not saying what they are. Mr. Cahaly releases almost no real explanation of his polling methodology; the methods page on Trafalgar’s website contains what reads like a vague advertisement of its services and explains that its polls actively confront social desirability bias, without giving specifics as to how. He says that he uses a mixture of text messages, emails and phone calls — some automated, and some by live callers — to reach an accurate representation of the electorate.

Conventional pollsters, who abide by long-tested and broadly effective methods to glean a representative sample, aren’t buying it. Besides, if there was ever such a thing as a “shy Trump supporter” — someone reluctant to admit that he or she plans to vote for the president — that species has been made virtually extinct during the raucous, rally-holding Trump presidency, said Daniel Cox, a polling and public opinion expert at the conservative-leaning American Enterprise Institute.

“People do not seem embarrassed to support Mr. Trump,” Mr. Cox said. In the past four years, studies seeking to quantify a so-called “shy Trump” effect in surveys have generally found little evidence to support it.

Late last month, Nate Silver of FiveThirtyEight got his hands on the cross tabs of a Trafalgar poll of Michigan that was still in progress. It found that more than a quarter of Democrats and Republicans expected to vote for the other party’s nominee, so far out of line with almost all other polls that Mr. Silver called the numbers “just crazy.”

Mr. Cahaly, of course, has no use for the skepticism of experts. He doesn’t seem to care whether he’s abiding by the best practices of the American Association of Public Opinion Research, the standard-bearing trade organization, any more than Mr. Trump says he cares whether the United States’ NATO allies respect him.

Among his polling colleagues, the main sticking point is Mr. Cahaly’s lack of transparency about his methods.

Tweets by @forbes_india
Fantasy sports are enjoying a good run with the IPL. But can they survive, with legal hurdles?
What awaits Trump if he loses? Many legal battles