The lifting of the travel ban will allow couples and families to reunite after 18 months and also end a diplomatic tussle between the US and the European Union, where thousands had turned to social media to press governments to end the ban 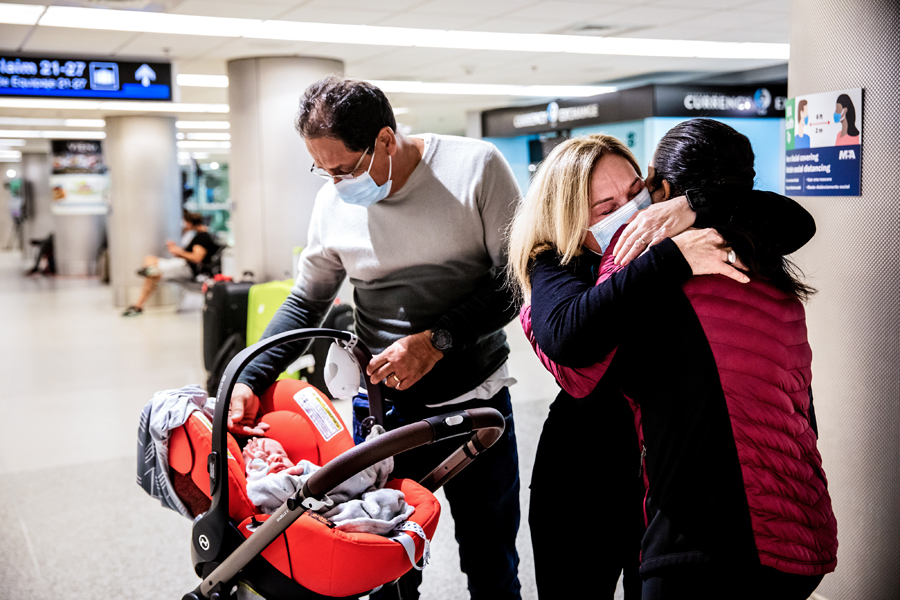 Passengers arriving from Sao Paolo, Brazil, greet their daughter, right, and three-week-old grandson, at Miami International Airport in Miami on Monday, Nov. 8, 2021. As of Monday, foreign travelers can enter the United States if they show proof of full vaccination and a negative coronavirus test taken within three days of departure. (Scott McIntyre/The New York)

BRUSSELS — Laurence Tesson, from Douai in northern France, has been aching for three years to see her 34-year-old son who lives in California.

For months, like many Europeans, Tesson waited in frustration as the United States kept its COVID-related travel ban in force, even after the European Union lifted its own prohibition on Americans. As she prepared to board one of the first flights to Los Angeles on Monday when the ban lifted for vaccinated Europeans and others, that frustration, and sadness, was giving way to elation, tinged with worry that something could still go wrong.

“Only when I set a foot at the Los Angeles airport will I be relieved,” Tesson, 54, said over the weekend, as she cleaned, and recleaned, her home to ease the tension.

The lifting of the travel ban will allow couples and families to reunite after 18 months of missed reunions, births, weddings and funerals. It also ends a diplomatic tussle between the United States and the European Union, where thousands had turned to social media to press governments to end the ban, using the hashtag #LoveIsNotTourism.

In June, the EU asked member countries to reopen their borders to U.S. travelers, and its leaders had expected that the Biden administration would soon reciprocate. The EU was closing in on U.S. vaccination rates — it overtook them in July — and members were containing coronavirus infections as U.S. cases were rising.

“We must solve this problem as soon as possible,” Ursula von der Leyen, president of the European Commission, said in unusually blunt remarks in August. “This cannot drag on for weeks.”

It dragged on for months.

Eirini Linardaki, a French-Greek visual artist who was flying to New York on Monday to be reunited with her partner, said she felt a sense of injustice over the summer as she saw planes from the United States landing in Paris.

“The idea that we couldn’t visit our loved one in the country they are, we as Europeans were not familiar with that,” she said about pre-pandemic travel.

Linardaki, 45, is still not taking anything for granted: “I keep wondering, is this real?”

Even with the borders open again, many Europeans struggled to understand why the ban remained in place for so long, said Edward Alden, a senior fellow at the Council on Foreign Relations who specializes in immigration and trade.

“This has separated lots of couples and families, and went on much longer than most people thought it would,” he said, “so there has been enormous frustration.”

The Biden administration is lifting the ban weeks before the holiday season, and Europeans can now enter the United States with proof of vaccination and a negative COVID test no more than 72 hours old.

But the opening comes just as Europe faces a near-record level of coronavirus infections. And although 65% of EU residents have been vaccinated, there are wide discrepancies within the bloc, with most Eastern European countries lagging.

That has left many Europeans worried that travel restrictions could be reimposed soon, although Alden said he doubted the Biden administration would reverse course in the weeks to come, citing pressure from airlines and foreign partners.