Developing your next CEO for the Family Business

Family businesses have four options when considering a new CEO, but the crucial decision is whether a family member or outsider would be the best choice. John A. Davis looks at each option

By John A. Davis 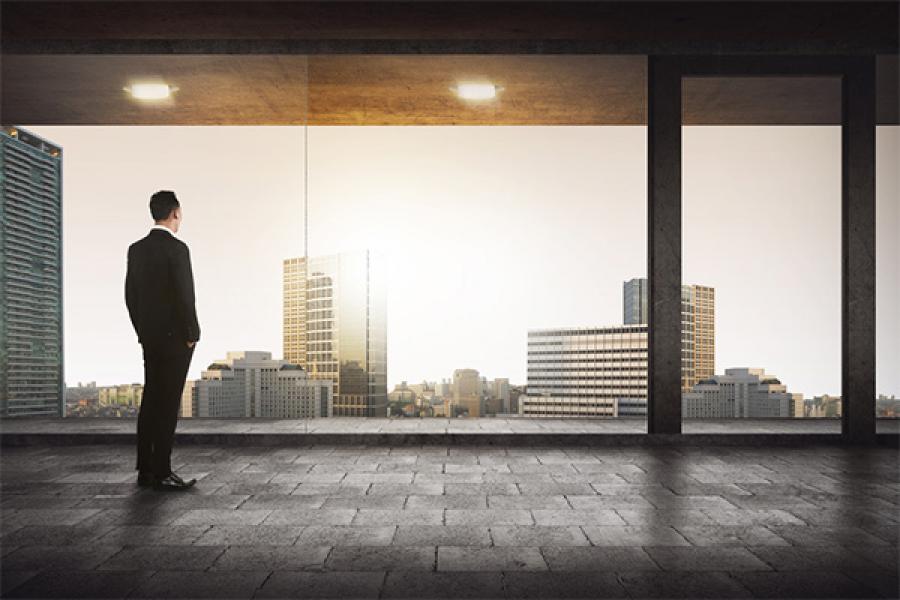 Image: Leolintang/ Shutterstock.com
In family companies, you also have the choice of family and non-family successors, giving you four broad choices for CEO successors

A good book on CEO succession is The CEO Within by my Harvard Business School colleague Joe Bower. Bower studied how companies perform after hiring a new CEO, noting whether the successor had been recruited from inside or outside the company.

Bower makes a strong case for making “Insider Outsiders” your next CEO. These internal candidates with some outsider views have a more objective and independent view about how your company needs to change and adapt. Executives with the right mix of Insider and Outsider attributes, Bower claims, are likely to do a better job and create more economic value as CEO. I agree but CEO selection is more complex for family companies.

Options for Family Companies
In family companies, you also have the choice of family and non-family successors, giving you four broad choices for CEO successors: 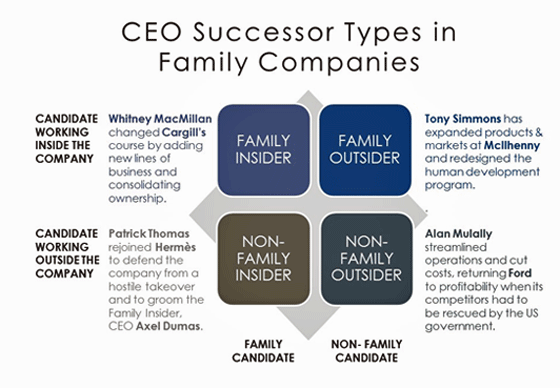 Each CEO type brings benefits and has some potential drawbacks

The Family Insider
Family Insiders like Cargill’s Whitney MacMillan and Axel Dumas of Hermès (see Fig. 1) are the traditional and preferred choice of successor in most family companies. They have the backing of the owners and bring to the job a deep understanding of the company. They understand how things get done in the company. But Family Insiders are not always the right choice. Family Insiders often have difficulty changing the business model. Significant change often requires letting some loyal people go and leaving some of the company’s long standing practices. In a fast changing industry, such changes are more common.

The Family Outsider
Family Outsiders who make good CEO candidates can be entrepreneurs like Alejandro Birman, whose startup was so successful that it added more than $200 million to the sales of his family’s shoe company, Arezzo. Or like Tony Simmons (See Fig. 1) who built a manufacturing company for Manitowoc Cranes as an Outsider CEO before buying that company and selling it, then being recruited by his family’s fifth generation hot sauce maker, McIlhenny Company. These family members have the right values and they respect the strengths of the company but are aggressive change agents.

The Non-Family Outsider
Non-Family Outsider Alan Mulally (See Fig. 1) had the deep skills and experience needed to change and then grow Ford Motor Company in the worst period ever for the auto industry (with the guidance and protection of Bill Ford, the family Chairman). He also respected the strengths and culture of the company; not all Non-Family Outsiders do. In fact, some have disdain for the values and fundamental orientations of family companies—and these leaders usually fail, rather spectacularly. Hermès got the best of both worlds in 2006 when Patrick Thomas, steeped in the Hermès and William Grant family businesses himself, succeeded Family Insider Jean-Louis Dumas after Dumas’ storied 28-year term (See Fig. 1).

In your succession plans, I recommend that you initially consider all four options. Don’t presume that one type or another is right.

Which ever type of CEO you ultimately choose, it’s a good idea to develop successor candidates who appreciate your culture, respect your strengths, and who are good at preserving key relationships. But they should also be able to move the organization away from activities and practices that are holding it back, toward those that can grow the assets of the company and revitalize it.

- John A. Davis is a Fellow in the Executive Education program at Harvard Business School, where he teaches in the family business, family wealth, and life planning fields. He is also the founder of the Cambridge Institute for Family Enterprise.