The Medicinal Springs of Tuscany

A walk through one of the longest surviving health fads

Last summer, in pursuit of an evasive Italian scientist, I found myself alone on an unexpected journey through Tuscany. I unromantically landed upon a small town called Chianciano Terme with no knowledge of its history or options for budget accommodation. As I searched for a bed for the night, I concluded that it was a medieval medical town gone modern. The colours were soft, the air maintained a calculated stillness, and behind the big windows of the hotel lobbies you could see people carefully playing cards through the night. I later learned the reason for my observations.

Thousands of years ago, the Roman emperor Augustus was seriously ill with liver disease. His doctor, Antonius Musa, reportedly cured him with cold baths from the mineral springs of this area. Another notable patient of Musa was the poet Horace who spread the word of these healing waters. The four springs of Chianciano — Acqua Santa, Acqua Fucoli, Acqua Santissima and Acqua Sillene — began to attract people for cures to their ailments. Today the motto of the town is Chianciano for a healthy liver. 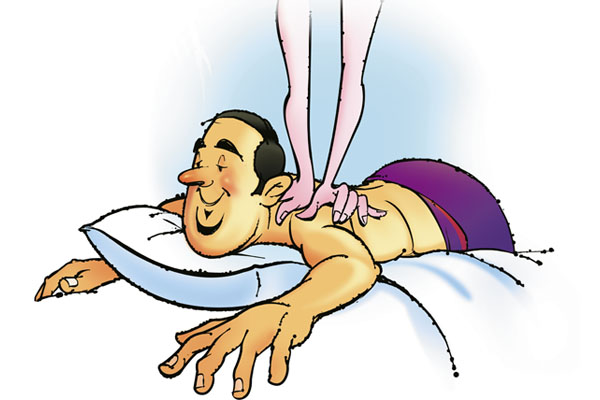 Illustration: Vidyanand Kamat
The four springs of Chianciano are used by revellers for bathing and drinking. The spring mineral water is bottled, used for cosmetic products, and is the basis for on-site medical treatment. A group called Terme di Chianciano runs spas where patients can receive thermal hydrotherapy for varicose veins, inhalation therapy for respiratory tract conditions, and mud treatment for arthritic conditions. Water from Acqua Santa and Fucoli are given by doctor’s prescription to be downed at different times in the day. The saline enriched mineral water is supposed to stimulate the liver and improve digestion. I knew none of the above when I was there, but somehow found my way to one of the luxury spas called Terme Sensoriali.

Most of the people I saw looked young, healthy, and serious. It was a spa for people who knew how to ‘spa’. Newcomers like me were left confused about what to do with the robe and slippers.

A visit could begin with a ‘walk in the river’ with jets of hot and cold water designed to awaken the senses. The ‘emotional showers’ combined light, water, fragrance in a rather epileptogenic way. A visit to the chilling ice crash was a reminder of the thermal therapy leit motif. The spa has itineraries that guide you through a purifying, rebalancing, energising or relaxing experience. It costs 38 euros to enter the spa for three-and-a-half hours and use the facilities. Massages have their own price list, though recent research suggests holding on to your wallet if you are simply looking for relaxation from a massage.

In a recently published study, subjects with generalised anxiety were either given 10 massage sessions over three months or an equal number of relaxation sessions with soothing music and deep breathing. Both massage and simple relaxation were able to reduce levels of anxiety by 40 percent at the end of the study and down to 50 percent three months later. The surprising finding was that there was no significant difference in outcomes between those who had massages and those who just did deep breathing.  Critics of this research justifiably argue that massage causes changes at the tissue level in a way that simple relaxation techniques cannot. However, if you are just looking to simply ease your nerves, you may be better off doing some pranayama instead of making a trip to Tuscany.

If you are in search of more than relaxation and find yourself thermal therapy touring through Tuscany, I would suggest you make reservations at the spas in advance. Musa would be pleased to know one of the most ancient health fads he started is thriving in Italy.

Dr.Vikram Sheel Kumar , and our health team, can be contacted at health.forbesindia@network18online.com

(This story appears in the 02 July, 2010 issue of Forbes India. You can buy our tablet version from Magzter.com. To visit our Archives, click here.)

Tweets by @forbes_india
Stage Craft
Redeeming The Past