Securens Systems: No cause for alarm

The e-surveillance company, started by Sunil Udupa in 2011, is making ATMs safer across the country 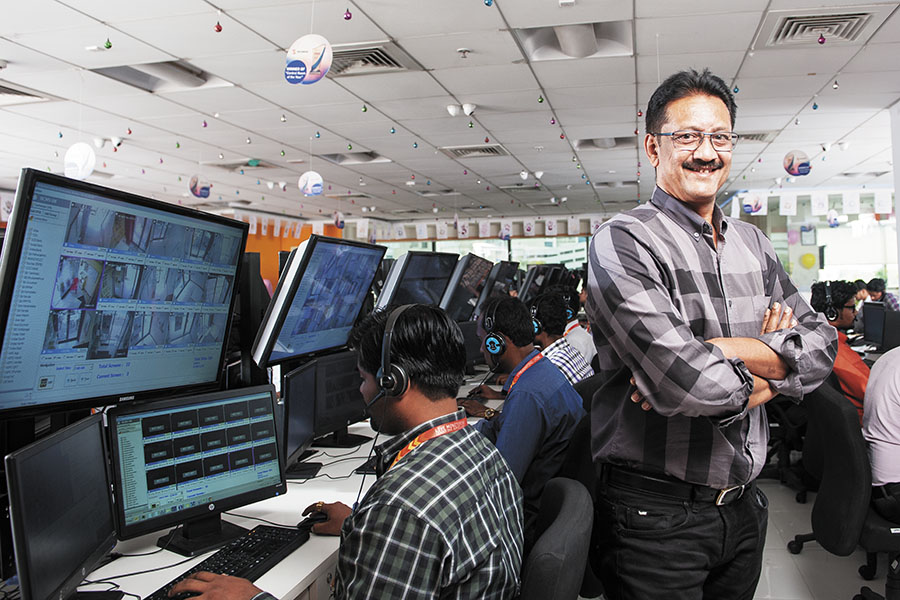 
At the Securens Systems central alarm monitoring station, one of the many computer screens—with live feed from ATM kiosks across India—suddenly raises a red flag. It is around 7 pm and a customer is seen bending near a machine. Immediately, he hears a voice asking him to back off. “What are you doing, sir? Please stand away from the machine,” the person in the monitoring room speaks calmly in Hindi. The befuddled customer moves away quickly. “Most theft attempts at ATMs take place at night, normally between 1 am and 4 am. We have more people monitoring these screens during those hours,” says Rohan S, who is in charge of the monitoring station located in Mahape, Navi Mumbai.

Securens calls itself a “new-age Internet of Things” company that specialises in electronic surveillance, with banks as a key market. “I noticed that the growth in ATMs was actually higher than that in debit or credit cards. For banks, the cost of maintenance of ATMs was very high. That was a big opportunity for me,” says Sunil R Udupa who, in 2011, founded Securens Systems with ₹1 crore of his own money.

Now the managing director of the company, Udupa, 54, drew up a blueprint to replace guards at ATM kiosks with reliable e-surveillance that included intrusion alarm panels, cameras and two-way audio. Banks, he estimated, paid security agencies around ₹30,000 per month per ATM to deploy 2-3 guards for a 24-hour vigil. Yet, they would be largely ineffective in preventing a crime as they were not allowed to carry weapons. Udupa’s plan was to install surveillance systems inside the ATMs and banks at one-fourth the cost and enhance security.

In 2012, he got his first customer in ICICI Bank. Udupa integrated the bank’s existing alarm system with two-way audio and videos, and connected this to the monitoring centre—5,000 ATMs were monitored through six computer screens.

Axis Bank and Standard Chartered Bank followed suit in the same year. “We saved a lot once we started to use Securens Systems: About $2.5 million every year for five years. They got technology into a market that was deficient of technology,” says Narayan Kurup, ex-head of physical security, south Asia, Standard Chartered bank (he has since moved to IDFC Bank).

Today, Securens Systems accounts for more than 50 percent of the ATM surveillance market. While initially the banks would keep a guard to complement the Securens set-up, most gradually shifted completely once trust in the technology grew. 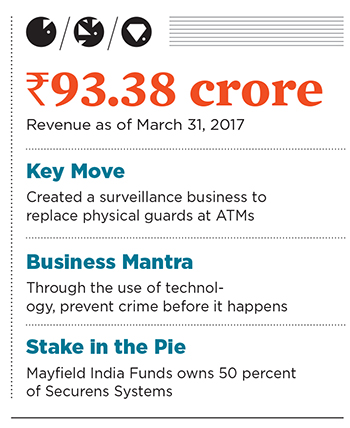 How does the Securens technology work? Through vibration sensors that get activated at any suspicious activity and pass on the message to the monitoring centres. If the centre spots a burglar, he is asked to leave. Else, the local police station is contacted and cops land up within 15 minutes. “Professional criminals never wait. We, too, don’t go after them later on. Our job is to protect the assets of the bank. Besides, once the criminal network comes to know that there are sensors inside the bank, they normally avoid all the branches of that bank,” says Udupa.

Over the years, the motion sensors have told quite a story: In Delhi, of guards charging people to use the ATMs like dormitories for ₹15-₹20 per night during harsh summers; in Mumbai, of an ATM being used by a doctor as a dispensary. “In all these cases we politely tell the people to vacate the place and later inform the banks,” Udupa says.

Nikhil Khattau, managing director of venture capital fund Mayfield India, an investor in Securens, was introduced to Udupa in 2012 through Sunil Jain of Sprout Capital, a merchant banking company. Khattau immediately took to the idea of Securens. “When I met Sunil, I realised that he really understood the ATM space. He had already proven execution capabilities. And I liked the business as it was a SAAS (software as a service) business with a lot of intellectual property. We are looking at surveillance as a service. The growth is enormous,” says Khattau, who is also on the board of Securens.

The person behind it
Udupa has always been fascinated by ATMs. It was in London, where he was doing his masters in information engineering at City University of London, in 1987, that he saw an ATM for the first time. The machine ended up swallowing his card. While he blamed himself for the misadventure, he fell in love with the idea of a machine that generated cash on demand.

Back in Mumbai, when asked by his father to withdraw money from the Bank of Mysore, he found himself hating the idea of waiting with a token in his hand. That was when he decided to bring ATMs into the Indian market.

Upon graduation, Udupa joined the HMA Group, an equipment manufacturing company, in 1987 with the purpose of introducing  banks to ATMs. The company set up its first ATM for Indian Bank at the Parrys Beach Station branch in Chennai, one that Udupa claims to be the first such machine in the country.

“These ATMs were different. They were offline. The money that was withdrawn from the ATM was written on the magnetic strip. Whether you had money or not, as long as the magnetic strip said so, you were allowed to withdraw the money,” Udupa says.

He later worked with AGS Transact Technologies as president and CEO, looking after the banking business unit. It is here that he ventured into the business of ATM outsourcing and figured out the challenges and opportunities in running a surveillance business.

Why it is a gem
Over the last five years, 12 banks have outsourced their ATM operations to Securens; the company manages 22,000 sites of which 18,500 are related to bank branches and ATMs. It has also started providing similar services to retail companies— McDonald’s and Domino’s, two quick service restaurants in the retail space, are customers.

Growth has manifested in the numbers: For FY2017, Securens notched a turnover of ₹93.38 crore, double the previous year’s figure; this is also the first year that it made operating profits, of ₹9.7 crore. “Ours is a capital-intensive business. We have to buy equipment that we give as a service. It takes time to recover the cost. We also have to rely on debt to finance the capital expenditure,” Udupa says.

Mayfield has invested in all the funding rounds Securens has gone through so far, after the initial investment of ₹16 crore in 2012. Its subsequent investments are to the tune of ₹30 crore as part of the Series B round in June 2014, ₹18 crore in December 2015, and ₹15 crore in September 2016.

In the process, the VC firm owns 50 percent of Securens Systems. “This is a rarest of rare case where we own 50 percent of a company. It has never happened before. But this also shows how much we love this business,” says Khattau, who likes the non-linearity of the business. Also, the fact that it can be taken to many more industries and is not restricted to banks and retail is a plus for investors.

Risks and challenges
There is the cost factor. The business model of Securens almost resembles that of a leasing construction equipment business. The cost of buying the equipment is huge and needs to be recovered over a period of time.

Competition is a serious challenge too. Both from the advent of technology, Artificial Intelligence for instance, and from new players entering the fray, attracted by the margins. Some of these competitors are well-known security agencies. For Udupa, though, there is no need for alarm bells just yet, especially if he meets his goal of forward-integrating physical security to technology.