The real executive challenge for many throughout the world has not been achieving growth, but re-structuring debt to survive

Over recent years the survival of a large number of companies has depended on debt restructuring. Companies in highly diverse sectors have had to restructure and refinance their debts.  Many have bitten the corporate dust due to their inability to handle debt restructuring. The real executive challenge for many throughout the world has not been achieving growth, but re-structuring debt to survive.

Take the case of Famosa, a Spanish company founded in 1957 and a leader in the Spanish manufacturing toy market with a market share of more than eight percent. At the beginning of 2009 the highly leveraged company faced a serious cash-flow crisis. 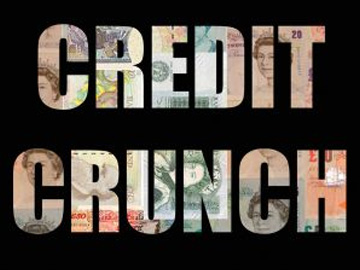 Faced with this grim reality, Famosa had two strategic alternatives: call a creditors meeting and try to reach a judicial solution -- an insolvency agreement, distress sale, or liquidation of the company; or initiate debt restructuring to provide the company with stability and make it viable, in order to later sell it.

This process took six months to negotiate and included funding needs of some €30 million, partially covered by an injection of new money totaling some €17 million; renegotiation of an old debt (some €200 million) with an average deduction of 65%; and designing a new finance structure, with long-term incentives for debtors (recuperation of liquidation value).

2.    Identify the root of the cash-flow problem.
Know whether the liquidity problem comes from operational activities, needs of working capital associated to growth, or new capex investments. Map out a realistic plan for the future, in which the free cash flow that is able to ensure short-term viability does not jeopardize the medium and long-term future of the company, thereby limiting plans for investment needed to ensure the continuity of the business.  Do not blame the banks for your lack of cash-flow.

3.    Draw up a coherent and credible business plan.
Both in operational and financial terms, and designed to improve the company’s cash flow. Identify short, medium and long-term needs. The business plan has to lists, among other things, the operational costs of investments. It could include new lines of liquidity for short-term and medium-term purposes (new money) which will generally be given super seniority. Try to ensure that the “sacrifices” required of each party are balanced and fair.

4.    Identify and cover short-term needs with short-term resources, and long-term needs with long-term resources.
Consider, for example the role of the trade creditors. The commercial creditors of a company in a distress situation tend to be far more disperse, and subject to far less individual risk than the banks. Hence, the trade creditors can have far more chances of taking the company to court and of rendering a restructuring process non-viable (or at least make the restructuring process a great deal more difficult). In these cases, these trade creditors have far more negotiating clout than the banks. Viability plans agreed with the banks should take into consideration this reality, which means that the free cash flow should include eventual payment to these creditors.

6.    Do not mistake restructuring for debt refinancing.
Unlike an ordinary refinancing process, whereby the company undertakes a bilateral negotiation with banks in a context where there are probably several alternatives, debt restructuring involves a large number of social and economic agents interacting in a situation for which there are few alternatives and enormous time pressure. Debt restructuring affects every aspect of the company and has a deep impact on its future and viability. Furthermore, as stated above, the survival of the firm depends on it. The long-term needs must be funded by converting debt into capital, provided that the level of financial leverage is not excessive.

7.    Identify the final agreements to be reached in the debt restructuring.
When there is a more or less temporary drop in the revenues of the company, which is still considered viable, materialize the final agreement in a new temporary scheduling of payment deadlines, types of debt (precedence and guarantees) and a renegotiation of associated costs. When the company has excessive debt that cannot be paid off in the long term, but the company is worth more if it continues to operate than if it goes into liquidation, make a conversion of debt into capital (capitalization) in return for adhering to conditions (policy-related or restriction of dividends). In this case, conduct a detailed negotiation of the value of the stake of new stakeholders, or seek alternative sources of capital (venture capital, for example).

8.    Focus on advantages.
The possibilities of carrying out a successful debt restructuring process depend to a great extent on which of the parties involved accept the agreements, as a way to move from a situation where loss is the order of the day to a situation where all parties all stand to gain, at least relatively speaking. Additionally, when negotiating a debt restructuring process emphasize the advantages associated with the process, which can help the parties accept proposed solutions as an eventual business opportunity. Table 1 summarizes some of these advantages. 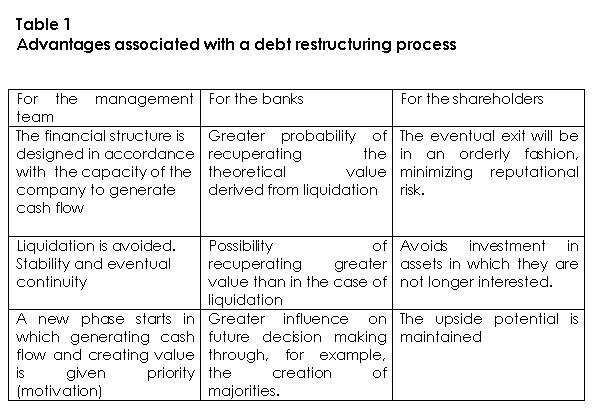 9.    Take advice from professionals
The key aim of a debt restructuring process is to reach a private agreement on the future terms and conditions of the firm’s debts in order to render the company viable in the face of an ongoing or imminent lack of funds. Broadly speaking it is about agreeing on how the company’s cash-flow can be distributed among the different providers of funds and other creditors so as to avoid bankruptcy or a liquidation process that would be overly burdensome for the different economic and social agents involved. Consequently, in most cases success in restructuring process may depend on whether or not the company has received assessment from professionals that are duly qualified to contribute with their experience in the field.