How will education change under a right-wing government?

It is not the State's Business to Write and Rewrite Textbooks 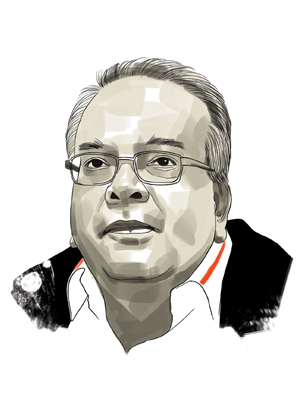 Image: Sameer Pawar
Mushirul Hasan is a noted historian and the former vice-chancellor of Delhi’s Jamia Millia Islamia University. He holds a PhD from the University of Cambridge and has written extensively on Partition. He served as the director-general of the National Archives of India from 2010 to 2013

In a democratic system, a change of regime is legitimate. It has happened in the past and will happen in the future too. Any change that takes place must be consistent with the spirit and letter of the Constitution. I say this because India is not an ordinary nation state. It has developed and evolved over a period of time. And its social structures, its intellectual and cultural lives have been nurtured by different sections of the society. All of which, though separate in many ways, have contributed to the making of India. If you forget this and begin to imagine that you can appropriate a certain legacy, and through the state machinery you can perpetuate and promote that legacy, you are already creating fissures.

The aim of any government is to strengthen the unity of the society, to ensure that the diversity of the country is preserved. And India is seen as India in a way that perhaps Jawaharlal Nehru saw in The Discovery of India—a mosaic of culture and community. I also think that the makers of the Constitution had the good sense to visualise a country during the very grim time of Independence. They could have opted for a Hindu state, which was the easiest thing to do. But they didn’t because they did not want to break the cultural and civilisational unity of the country, something that Mohammed Ali Jinnah and the Muslim League had already done.

They [the Constitution makers] wanted to keep intact whatever was left to them. And for well over three decades, they managed to do so. ‘Unity in diversity’ was not just a slogan; it conveyed the aspirations of the people, who wanted to live together and respect each other’s culture, religion and way of life.

And that is the general framework within which the future of a nation like ours has to be examined, discussed and promoted.

BJP is clearly a right-wing government and has all the faults of a right-wing government. A right-wing government is not desirable in any society, more so in a country like ours with its uneven growth. It is a different country where you have to depend on a welfare system. It is all very well for me to sit in an AC room and pontificate on how subsidies should be withdrawn. But think of the 60 percent of the population that is below the poverty line; don’t we have any obligation towards them? We talk of bringing people to the mainstream. But right-wing economic policies do everything to keep the mainstream away from the poor. So in slogan, mainstream is there, but in practice, it makes sure that the mainstream includes only the rich.

Every government has an ideology. There is nothing wrong in being ideological. But again, the ideology of a national government as against that of a state government is different; it has to be consistent with the interest of the nation. It should not reflect sectarian or communitarian interests. 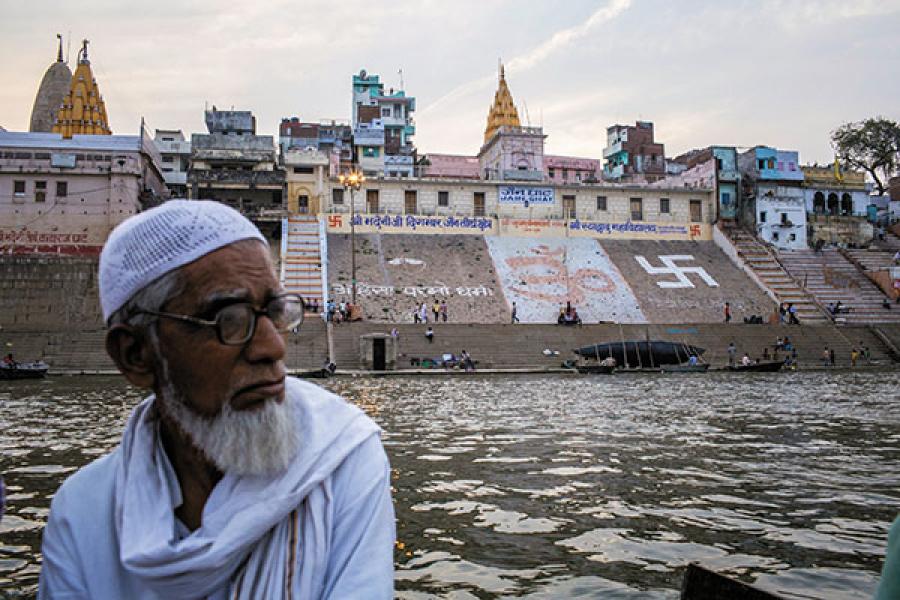 Image: Getty Images
A Muslim weaver at the Jain Ghat in Varanasi, a Hindu stronghold which voted for PM Modi
But the BJP is trying to do just that. The damage has been done with the appointment of the Indian Council of Historical Research chairman [Yellapragada Sudershan Rao] who is committed to a totally different world view that is divisive. This is a pointer to what might happen later. I think we need individuals who can provide leadership and infuse dynamism in our institutions. We don’t need these kinds of ideologues who have a sectarian view on so many matters. These offices should be manned by men of academic excellence.

We have seen how the Babri Masjid issue has [led to] sectarian perspectives and created havoc in our society. This government, having got an impressive mandate, should mend fences with the Muslim community. It is a large community and should not be stigmatised. They have lived here for hundreds of years and are part of the country’s culture. Why are you treating them as the ‘other’? Even immigrants in the UK are nicely integrated in the system. They are provided with facilities to learn languages, they run temples and mosques. That is how you create a multicultural society. Here, there are all kinds of people doing all kinds of things to create insecurity within a community that is so large. What are you going to do with them? What is their fault? I have nothing to do with Babar and Aurangzeb. Why are we being made to pay for their sins?

Then, what about Buddhists? They have good reasons to complain about the destruction of their temples. What about Jains? There is no end to this kind of approach to history. We have to create a common citizenship. The government is talking about a common civil code. How can you talk about it when you can’t create common citizenry?

The role of education [in nation-building] has been quite significant. But like everything else, the education system is uneven in terms of quality. There are government schools, which are not very good, as against private schools, which are available to only a small segment of society. Girls’ education is not as good as it should be, except maybe in Kerala. There is great unevenness. That is why whichever area you choose, you have to take into account the unevenness in society.

It [BJP] has probably trodden the beaten track [on education] because it has essentially said the same things over the last decades. Its objective is to romanticise the ancient past and rubbish the medieval past. It wanted to exclude 700 years of history from history books. The right-wing ideologues glorify the British to rubbish the medieval history. This is the kind of training being imparted in our municipal schools, colleges and universities. 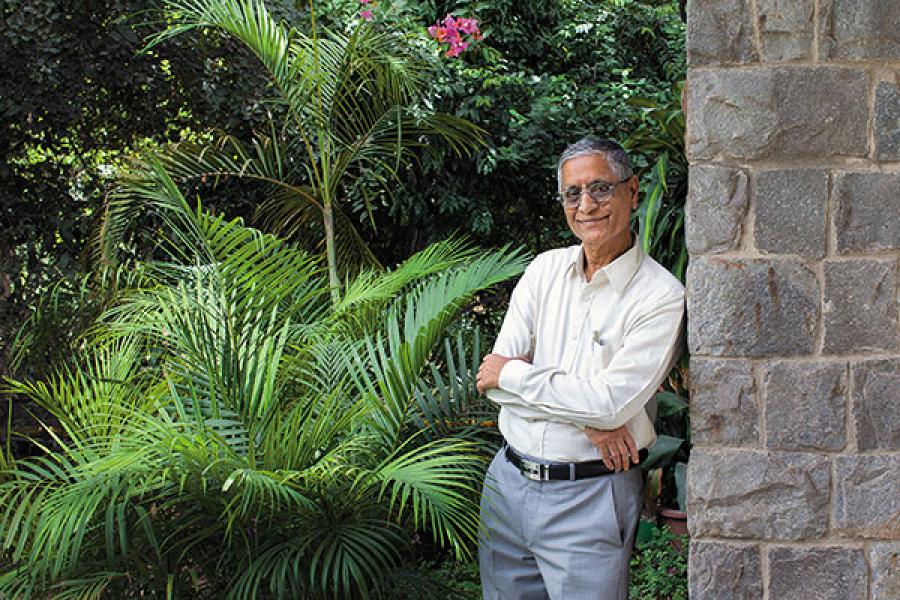 Image: Narendra Bisht / Outlook India
Yellapragada Sudershan Rao, newly appointed chairman of the ICHR, is an active member of the RSS
The whole business of inventing heroes in education has dangerous consequences. Because heroes are pitted against enemies and heroes emerge out of enemies. Fortunately, Gandhi, Nehru or Patel don’t emerge out of enemies. But Maharana Pratap does, Prithviraj Chauhan does, Shivaji does. These heroes have become exemplary in a society which is increasingly becoming polarised. So education, instead of narrowing the divide, and creating a common perspective on history and contemporary life, has led to a drift. The task of education should be to promote common citizenry. So when one votes in an election, one votes as a citizen and not as a Hindu or a Muslim or a Brahmin.

Two UPA governments didn’t do much. There was noise from Kapil Sibal [HRD Minister from 2009 to 2012], but it was confined to TV studios. His message did not reach large sections of society. He had no idea about higher education. That is why most of his schemes have not worked. Right to education being one. His stand on private universities was not correct. I’m not in favour of private universities coming to India. I want public universities to be strengthened first. And when we are in a position of strength, we can allow private universities. There is a lot of muddle-headed thinking that took place. Education was one area that remained neglected.

Under NDA 1, saffronisation of education happened. Organisations like the NCERT, pivotal for framing textbooks, were deeply affected. This business of rewriting textbooks took place. It was motivated to not present the past in an accurate way, but to communalise it. If you see textbooks in Gujarat and Madhya Pradesh, you will find that they run contrary to the nation-building project of keeping the country together. They are full of distortion, on one hand romanticising certain periods of history and extolling virtues of some individuals and on the other, denigrating and attributing all ills of society to Muslims.

In countries like the UK, a change of government makes no difference because the state is not in the business of writing or rewriting history. The ideal situation in India would be for the state to be out of this. Governance doesn’t mean you have to act as police or a commander.

Smriti Irani’s appointment [as HRD Minister who oversees education] suggests that education is nobody’s priority. Look at the list of HRD ministers we have had, from Maulana Abul Kalam Azad to MC Chagla to Nurul Hasan, VKRV Rao. Very able men. The vision of the minister matters. And that vision has to be inclusive. It cannot promote the interests of just one section of society.

You will see a spurt in academies for Vedic studies and Sanskrit universities. But as under [former HRD Minister] Murli Manohar Joshi, they don’t make serious dents in our academic life. Fortunately, academic life in India is still secular and rests on liberal principles and values. I hope it will not be affected by the change in government.

Censorship in the long run goes against scholarship and creativity. We have been a creative society and this creativity shouldn’t be stifled. The BJP government should ensure, even as it promotes its own agenda, that it doesn’t stifle dissent and protest. This is too vast and uneven a country. Any attempt to enforce uniformity, whether through the Hindi language or historical lessons or use of symbols like Patel, will be counterproductive.

Tweets by @forbes_india
Narendra Modi has chosen bureaucracy as his weapon. Will it work?
National River: Ganga