Narendra Modi has chosen bureaucracy as his weapon. Will it work?

Changing the mindset of the Indian babu 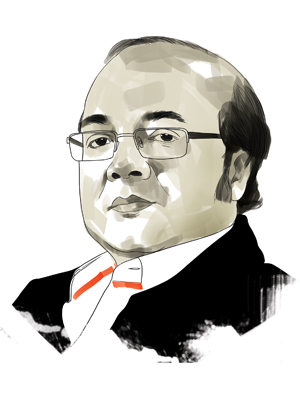 Image: Sameer Pawar
Sandipan Deb founded Open magazine, and has been the managing editor of Outlook and editor of The Financial Express. He’s also authored three books, most notably Fallen Angel: The Making and Unmaking of Rajat Gupta, and The Last War, both published in 2012. Currently, he is managing partner of Aardvark Media, a boutique media-agnostic publishing house

In January 2001, a couple of friends and I attended the Mahakumbh Mela in Allahabad. It was in fact the Mahakumbh of Mahakumbhs—apparently, the stars align in this manner only once every 144 years. I happened to be there on the day of the holiest bath of the festival. It was an astounding spectacle, and I will never be able to forget the line of millions of people as they walked from the city and through the entirely new town that had been created on the banks of the Ganga for the occasion, in search of succour and salvation. Days later, I calculated that if all the people who had attended the Kumbh that night stood in single file, separated from one another by one foot, the queue would have stretched from the Prayag to Miami (assuming there were no seas in between).

However, the most amazing aspect of what we witnessed was the perfect organisation of the entire event that had stretched for more than a month. Everything was done utterly efficiently, from security to lost-and-found services to managing the swelling crowds to the cleanliness of the thousands of temporary toilets that had been built. Obviously, the Indian bureaucratic system worked superbly when served with a massive challenge, and when the stakes were almost immeasurably high (Last year, Uttar Pradesh CM Akhilesh Yadav was invited to Harvard Business School to present a case study on managing the Kumbh).

Prime Minister Narendra Modi wants a paradigm shift in how government works in India, and he has chosen the bureaucracy as his weapon. He ran Gujarat for 13 years through a tight group of loyal and competent officials who reported directly to the chief minister, often bypassing the relevant minister. He wants to do the same at a central level, and the question is: Can he?

For Modi is not only trying to create a wholly new way of how India is run, but also doing it at a time when the bureaucracy is perhaps at its most demoralised and risk-averse. The last five years have seen an astonishing drift in government, a debilitating lethargy in governance and a host of scams that convinced bureaucrats that the only correct decision was to take no decision at all. Files accumulated dust, stasis set in. The process had begun a long time ago—the slow degeneration of babudom—but over the last five years, the system seemed to have become ossified.

As far back as 1964, Prime Minister Jawaharlal Nehru, who had once called the civil services “the steel frame of India”, confessed to friends that what he considered his greatest failure was his inability to “change the administration, it is still a colonial administration”. He then went on to elaborate his belief that the continuation of that colonial administration “was one of the main causes of India’s inability to solve the problem of poverty” (quoted in the introduction to the Second Administrative Reforms Commission report of 2008 by chairman Veerappa Moily). In March 1966, Prime Minister Indira Gandhi said in Parliament: “What India needed today, was a revolution in the administrative system without which no enduring change could be brought about in any field”. 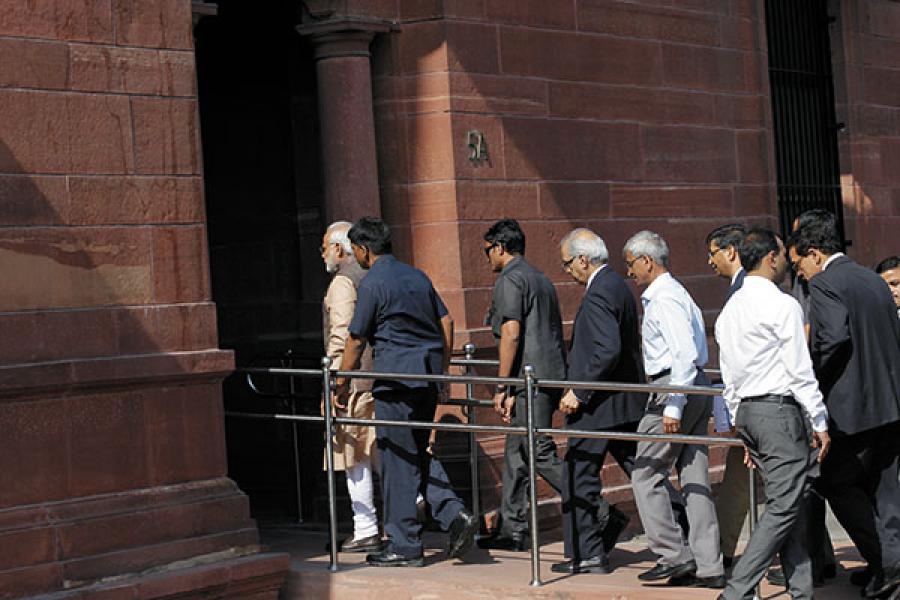 Image: Getty Images
Senior bureaucrats have been told to expedite the process of taking decisions
An incredible 600 committees and commissions have looked into different aspects of public administration in the country since Independence, but nothing much has changed. Moily goes on to write: “The common experience… is that (bureaucrats) resist changes as they are wedded to their privileges and prospects and thereby, have become ends in themselves… It will not be an exaggeration to say that the civil service in India… believes that its authority and legitimacy is derived not from the mandate of the people but from an immutable corpus of rules that it has prescribed for itself, without any correspondence to the needs and aspirations of the people it serves and the democratic ethos. That is why the functioning of the civil service is characterised by a great deal of negativity, lack of responsiveness to what the people want and the dictates of democracy.”

In 2012, a report by Hong Kong-based company Political & Economic Risk Consultancy Ltd released the results of a survey it had conducted in 12 Asian countries. The study found India to have the worst bureaucracy. The report, which was based on the responses of over 2,000 employed residents and expatriates across Asia, blamed India’s poor infrastructure, widespread corruption and “fickle” regulations for making business a “frustrating and expensive” affair. It said India was a “bureaucratic nightmare” for businesses.

In January this year, “a senior Indian Railway Personnel Service officer”, writing under the pen name Ravi Pipal, laid out nine commandments on how to be a successful bureaucrat in India, on the website babusofindia.com. Among these tenets were: “Subordinate is always at fault”; “Give up politeness. Being polite is a sign of weakness”; “Do not hurry up in disposing of files. If you do so, more files will pile up, and you will have a bad reputation of being casual”; “In case you are under pressure to ‘fix’ responsibility, catch hold of the last man in the row (lowest in rung)”; and “Are you finding yourself out of place in a discussion? Try diverting the topic from Sahara to Antarctica or vice versa.”

Modi wants to change all this, and fast. He was calling senior bureaucrats for presentations—single-slide bulleted-box PowerPoint files—even before he took oath. Almost his first action after moving into his new office was to meet all 77 secretaries of the central government and ask them to think out-of-the-box. They need not feel intimidated or scared to take decisions, he told them; when in doubt, they could even approach him or his office directly. He would protect them. The flip side of the coin: All decisions have to be time-bound, all deadlines have to be specified and met, six-day weeks, and none of those golf breaks or long lunches at the Gymkhana Club during working hours. 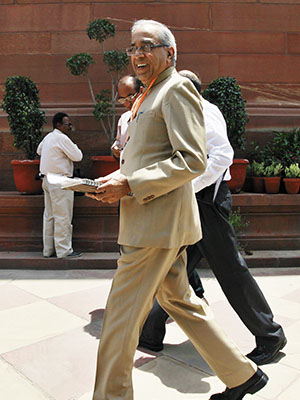 Image: Getty Images
Nripendra Misra, principal secretary to Prime Minister Narendra Modi, in New Delhi
The need to have 12 signatories to a file has been reduced to four. There is a two-week time limit to every decision process. Everyone through whose hands a file passes has to make a comment and cannot pass it upwards with a “Pls advice”. All files have to be kept under lock and key.

Two months have passed since then, and observers claim there is a palpable sense of urgency in government corridors. The media reports that all senior civil servants are in office by 9am, and many are working 12 hours a day. The Cabinet Secretariat has taken to calling up secretaries on their office land lines late in the evening to check whether they are still working. This seems rather schoolmasterish and even vaguely scary, but Modi is determined to set a scorching pace and maintain it. After all, it is said, he himself maintains a 20-hour workday.

Of course, this style of functioning raises several questions. Encouraging bureaucrats to openly differ with their ministers can undercut the powers of the minister. And not many ministers would like their secretaries to go over their heads and approach the prime minister. The counter-argument is that right now Modi has such a vice-like grip on both the cabinet and party that few politicians in the ruling coalition would like to get on his wrong side. They would rather wait and watch. Yet, practical problems could arise from the large-scale centralisation of decisions in the Prime Minister’s Office. Quite simply, how much can the PMO cope with?

Also, how long will this last? Though no one has the gumption to say so openly, cynical officials are already smirking that this is a passing phase, that it will all be back to business as usual in a few months time. Gujarat was after all a state, here Modi and his men are dealing with a vast nation with contradictions, vested interests and loophole-seeking behaviour at every step. Can a few driven men control the destiny of a nation, which currently faces myriad and diverse problems?

Finally, even if Modi manages to turn the central government into a Ferrari on steroids (which is a massive task; just take a look at the number of government employees openly sleeping in the grassy traffic circles in Delhi on post-lunch winter afternoons), what about the states?  The state governments will possibly still move at their own pace, unless Modi can inspire the regimes there, or foster competition between them.

What Modi is trying to push is a complete change in mindset in the civil services. Or, one can also put it this way: He is trying to revive the mindset that characterised the best Indian bureaucrats in the past decades, before they became babus—an ideology, a work ethic, a passionate commitment to the national interest. To put India on fast forward, Modi is, paradoxically, trying to turn the clock back.

Correction: This article has been updated. Sandipan attended the Mahakumbh Mela in 2001 and not 2011 as stated earlier.

Tweets by @forbes_india
Economic Milestone: Liberalisation, Privatisation and Globalisation (1991)
How will education change under a right-wing government?

Who benefits from the Farm Bills—farmers or private players?