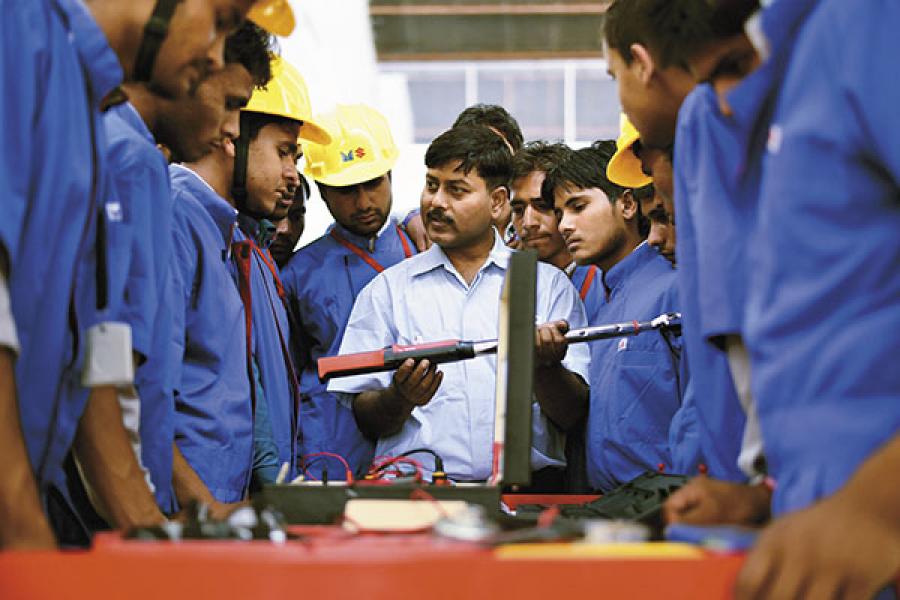 Image: Getty Images
Maruti Suzuki is imparting automobile skill training at 45 ITIs in 2015-16. Skilling its youth is one of the biggest challenges that India faces

India’s demographic dividend has already begun and over the next few decades will be powering the rise of its workforce. India’s workforce of 484 million people (in 2011) has the potential to increase to 850 million by 2025. This compares with the peak workforce of 830 million that China is expected to have in 2016. As China loses numbers in its workforce, potentially, 366 million people would have joined the Indian labour pool over a decade and a half. Women have hardly been a part of India’s workforce and therefore, their entry will power the demand for jobs and supply of labour. India needs to create 20-24 million jobs a year, or around 2 million jobs a month—double of what we are accustomed to hearing.

India has failed to move people out of agriculture, with half the workforce (240 million people) still stuck in an activity that contributes lesser and lesser to economic output. Agriculture’s share of overall output has fallen from a third to a sixth over the course of the last two decades. If half the working people produce only a sixth of the output, no wonder it is impoverished. The next generation of farmers is keen to move away from agriculture and join the bandwagon of growth unleashed by the manufacturing and services sectors. Even if half the population that is currently involved in agriculture (120 million people) were to move out over the next decade or so, that adds another million jobs to be created every month in manufacturing and services.

If 3 million people are to join the workforce every month or are to be retrained for new skills, skilling and connecting them to relevant jobs will be one of the largest challenges India will face, not just in 2016 but over the next decade or so. India’s efforts at educating its youth to power this transition have been a mixed bag. Government schemes have brought more than 95 percent of children to primary schools but dropout rates and quality of education remain poor. What India continues to lack is a parallel track of education where students (say in their early- to mid-teens) can find the vocations that they find interesting or remunerative. The current system over-produces students who have gone through tertiary education but significantly under-produces qualified people with vocational skills.

India’s growth story has not been predicated on manufacturing-led growth. Typically, countries with large demographic dividend have employed their burgeoning population in manufacturing, which is directed towards the world market. India has, over the last decade, invested significantly in hard infrastructure— power and transport (roads, rails, ports, etc)—even as it struggles to figure out the right prices to charge for them. The focus is now increasingly on softer issues like labour reforms. Corporate India and small and medium enterprises (SMEs) have found a way out of rigid labour laws by employing contract labour. However, this jugaad solution is suboptimal for all: The employers have limited commitment to workers and hence do not upgrade their skills and the workers have limited certainty of getting their paycheques. India needs to recognise the reality of poor labour productivity and update its laws to reflect the current reality. Mercifully, India has realised that manufacturing requires scale and hence, over the last decade or two, progressively done away with small-scale reservations. The critical variable here will be whether Indian goods can capture market share in a world where growth in general, and trade growth in particular, has been anaemic. India should seek to bring in job-creating FDI, which can serve both the local and global market.

The corollary of a services-dominated economy is that most of the employment creation is expected to take place in cities that are already established. India’s urbanisation will be the expansion of its current cities and not necessarily the creation of new ones. In an era where manufacturing led the growth of an economy, new cities came up around manufacturing hubs. In a services-dominated economy, existing cities expand. Around a quarter of India’s rural population live in villages with over 5,000 people. Such villages would be classified as urban in most countries; no wonder they too are demanding service quality levels for their utilities that match urban standards.

Unfortunately, the urban standards themselves are nothing to write home about. India has run down many of its urban utilities under the garb of hypocrisy: Pricing the services of the utilities low so that the poor can afford them. However, this impoverishes the utilities so much that the poor can hardly be served by them. Think, for example, of water and sewage or public transport in urban India. In both cases the pricing of the service is kept low. The outcome is that utilities do not generate enough income to invest in their infrastructure. People then get either completely excluded from the services of the utilities or get the outputs rationed. The rich are able to create a parallel infrastructure for themselves at a significant private cost (think of water tankers or two- and four-wheelers) while the poor remain dependent on poor quality services that the utilities provide.

The private cost that this public failure imposes on private citizens is detrimental to India on two counts: One, the cost being high (the creation of parallel infrastructure denies it scale benefits to reduce costs) forces the spending of a large part of India’s wallet on basic necessities, keeping Indians tethered to a lower quality life; and two, public failure hits the poor the hardest. This will present a key dilemma for Indian policymakers: How to make the financing of infrastructure financially viable? World over, large pension and sovereign funds are scouting for yield assets: If India can get its pricing act right or create newer sources of value (expanding cities and better quality infrastructure leading to better land values, etc), much of its urban infrastructure can be financed by cheap, long-term global funds.

The encouraging part is that the government is cognisant of these issues. ‘Skill India’, ‘Startup India’, ‘Make in India’ and ‘Smart Cities’ are among the initiatives it is keen to execute. None of these will be easy but they are critical: Their success will determine the fortunes of India’s demographic dividend.

AKHILESH TILOTIA is associate director at Kotak Institutional Equities and the author of The Making of India: Gamechanging Transitions.