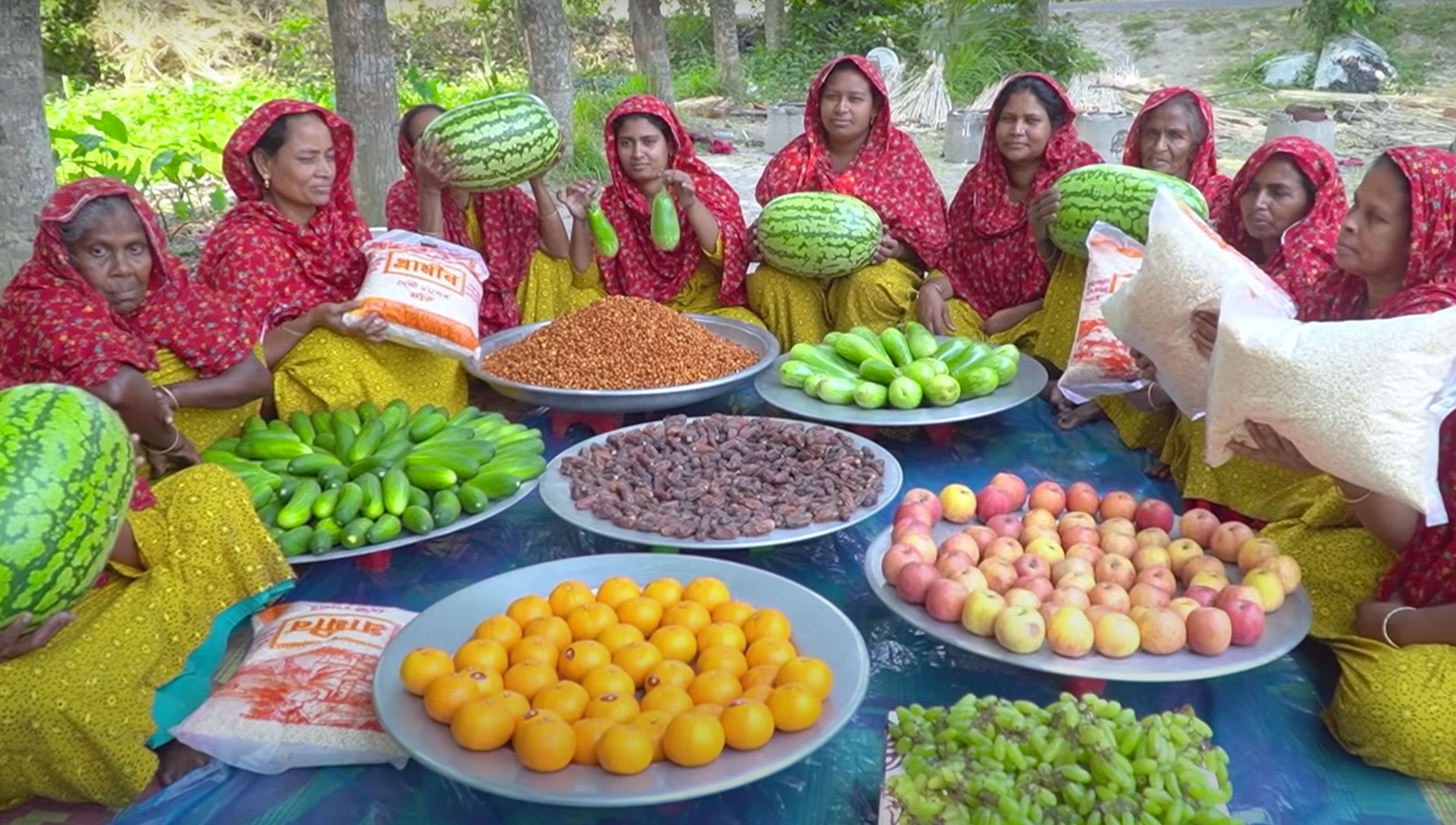 Fruits and spices prepared by 15 women of the village during Ramadan. Image: AroundMeBD

In South Asia, many villages and communities have Youtube or Facebook channels, and residents are actively involved in making them a success. Through traditional cooking tutorials, villagers show the world their culture and their daily life. But it's not just about recording scenes for posterity; such channels often tally up considerable views on these platforms and generate enough money to finance various projects for the village concerned. Once isolated, these "Youtube Villages" are now sharing their daily routines with viewers around the planet.

A group of women are cooking for the whole village, that is, for nearly 400 people. In this video, 15 women are seen cutting the heads off mackerel, dipping the fish in boiling oil and preparing a curry sauce for a dish which they then serve to the village's entire population. This is how to make mackerel curry the "Bengali" way. This is one of the latest videos from the AroundMeBD youtube channel, released a few days ago and on which you can find many vlog 'episodes' like this one. A virtual dive into the traditional cuisine of Shimulia in Bangladesh.

Created in 2016 by Liton Ali Khan, owner of a cybercafe, the channel highlights the village's cooks, who demonstrate in front of the camera the different ways of cutting giant fish or show viewers how to cook a meat recipe, that of the favourite dish of the village: buffalo intestine curry. While the content is simple, consisting of affordable cooking tutorials, this channel reveals the daily life of this community living in the west of Bangladesh.

With the ensemble together racking up approximately 1.3 billion views, the videos have quickly become a business model in their own right. "All villagers—irrespective of their financial condition, creeds, religions—can come here and eat the food [that's cooked for the videos]," Delwar Hussain, who helps run the channel, told the magazine Rest of World.

While the meals prepared for the videos help feed part of the village, the revenue generated by the millions of views accumulated is used to support the village and finance new projects.

The AroundMeBD channel employs about 50 people in the village, including 17 women. The team have done on the job training to operate cameras, edit, and direct the shoots. As the channel's success has grown, the company has installed games for children and rehabilitated damaged houses. It even covers the medical expenses of the villagers employed.

In South Asia, this idea of a "YouTube village," as Shimulia is labeled, is a growing trend. "As the internet reaches villages, rural societies are finding ways to showcase and monetize their unique food cultures to audiences across the world, using platforms like YouTube and Facebook," says Rest of World.

According to the media outlet, culinary channels in India and Pakistan are also successful, while in Indonesia, a mechanic named Siswanto has reached 2 million subscribers on his channel, according to France 24.

Tweets by @forbesindia
We either win, or we learn. We never lose: Harmanpreet Kaur
Subversive or truthful? How rap lyrics can be viewed as a confession by the US justice system