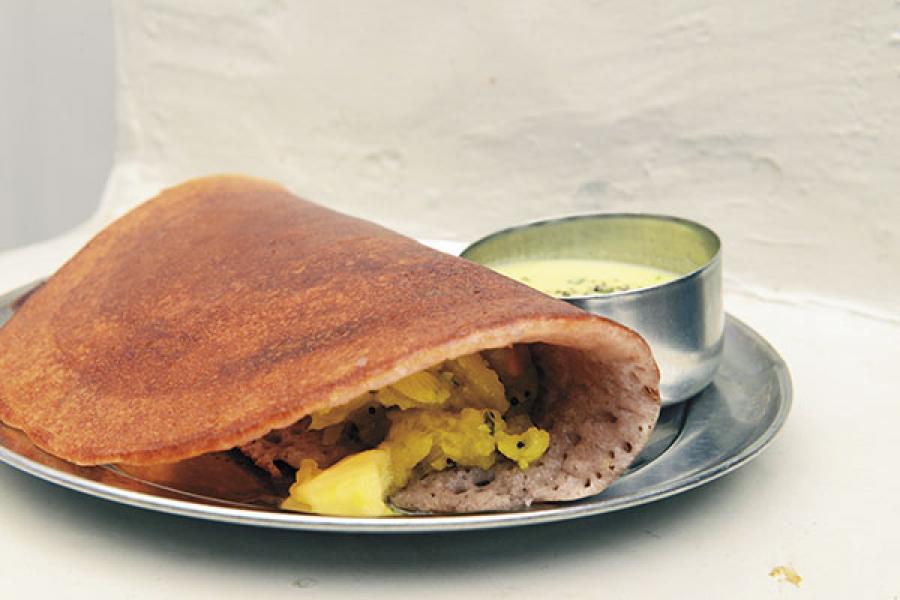 In a narrow street, diverging from the canopied lanes of the staunchly Old Bengaluru neighbourhood of Basavanagudi—lined with row houses, as opposed to gleaming apartments—a long queue is snaking up to the counter at Brahmin’s Coffee Bar. Having eaten here numerous times, I know what is on the nailed-to-the-wall menu, and what lies beyond the coy minimalism: Signature soft grainy idlis paired with crispy golden vadas or the tangy khara bath, all bathed generously in greenish white coconut chutney, served in palm-sized steel plates. The vada here is crunchy and the khara bath glistens without being too oily. Sambar, though, is verboten in this restaurant that has thrived for 50 years.

“Don’t they serve anything else?” asks my friend’s father, who is on a short visit from Sri Lanka, somewhat incredulously. He cannot wrap his head around people queuing up patiently in a restaurant that serves exactly two dishes.

But the crowd signifies more than just the potency of this menu—it is emblematic of the new found favour that the rustic local cuisine is gaining in the cosmopolitan city, amid the hip global cuisine and craft beer scene.

For decades, Mavalli Tiffin Rooms (MTR) was the lone face of authentic Bengaluru food. Guidebooks extol its gastronomic virtues and visiting tourists line up for hours for an entry into its austere dining halls to be served in silver plates and tumblers.
Now, however, on any given day, I see food tour crowds congregating in front of other old-school establishments like Brahmin’s, Vidyarthi Bhavan and Central Tiffin Rooms (CTR) , guide in tow. (Full disclosure: I have been part of that crowd many times.)

Kannada-speaking locals are substantial, but their visits are few and far between. In the five years I have been in the city, I have come to realise that Bengaluru has the ability to provide a sense of rootedness. The city opens its doors if one makes an effort to just speak the local language—a word here and a word there is all that matters. The language pride suddenly melts. It also helps that you can order confidently, like I do, in restaurants like Vidyarthi Bhavan: “Ondu benne masale kodi saar , [Give me a ghee masala dosa].”

There are two types of dosa loyalists in Bengaluru—those who love the amber brown Vidyarthi Bhavan benne masala dosa and the ones who swear by its crispy blonde version served at CTR. Unless it is after nine in the morning, there is little possibility of an easy entry into Vidyarthi Bhavan. The entrance is always crowded with patrons who arrive like flies flitting on a ripe jackfruit—a sight you can see at the fruit stalls of Basavanagudi, not far from the restaurant. The ghee masala dosa is the crown jewel of South Indian cuisine and Bengaluru’s establishments know their business. Biting into the dosa is not very different from having a gourmet sandwich stuffed with artisanal cheese. Crispy brown on the outside, the upper crust of the dosa is curiously fluffy and the mildly-spiced potato works as a well-thought-out filling.

Dosas apart, patrons at Vidyarthi Bhavan are also treated to the sight of waiters balancing 10 to 12 plates of the dish stacked in their hands, swiftly carting them out of the kitchen and serving them on to the tables. Cameras and flashlights flicker at the sight and waiters smilingly oblige.

I was introduced to Vidyarthi Bhavan by a friend. After watching me devour the dosa on our first visit, she told me to wait until I tasted CTR’s rendition of the dish. Evidently, she is a CTR loyalist.

I did sample the CTR version of the dosa soon after and found that to be luscious too. I couldn’t imagine a better treat for my taste buds than gingerly breaking the dosa’s delicate golden crust and dipping it in the chutney before slipping it into my mouth. But it’s hard to take sides. Surely, one can be in love with two things at once.

Establishments like Vidyarthi Bhavan and Brahmin’s were started in the area to serve the student population. A single serving of the entire menu at Brahmin’s will set you back by just around Rs 150. Even now, you will see the neighbourhood’s working bachelors frequenting Brahmin’s.

Their pictures hang on the wall invoking nostalgia in the old-timers among the waiters. 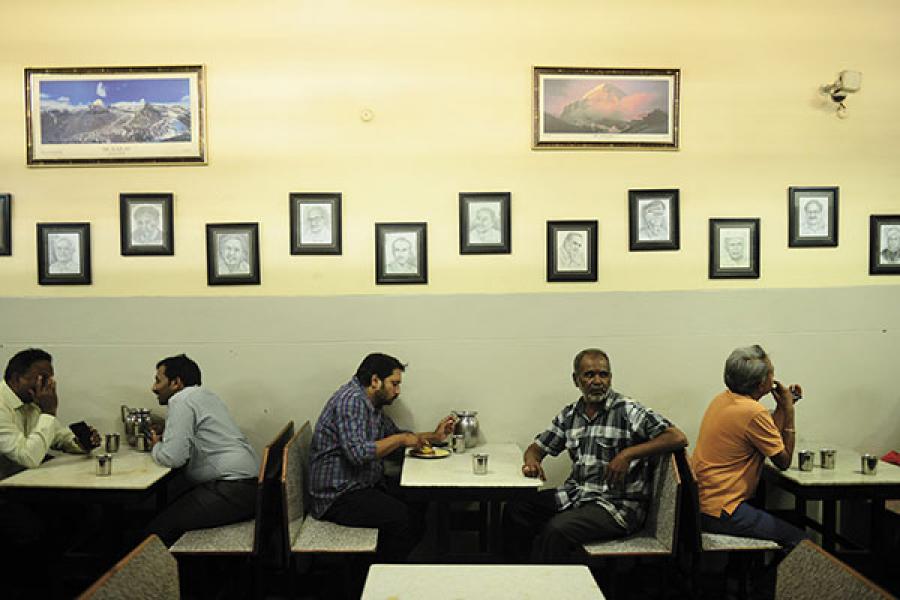 Image: Bmaximage
Vidyarthi Bhavan started in the 1960s in Basavangudi. The walls are decorated with images of Kannada literati

But Bengaluru’s food is not all about dosas and idlis and khara baths (though I’m perfectly content to have these for breakfast, washed down with frothy brown South Indian filter coffee, for the rest of my life). There is also a rich heritage of meat eaters in Bengaluru: The wet market in Shivaji Nagar, which opened in 1927 and is among the few legacies of the Raj, is the nerve centre of meat trade.

Thanks to the vibrant Anglo-Indian community and migrants from neighbouring Kerala, Andhra Pradesh and Maharashtra, Bengaluru is home to numerous unique meat dishes. Even in the alleyways of Basavanagudi and Malleshwaram, where vegetarianism is the celebrated mode of gastronomy, it is possible to spot narrow stalls serving anything from quail biryani to brain fry, their conspicuous flex boards announcing the menu, often laced with soot from their own kitchen.

Kollapuri’s in Basavanagudi—a hole-in-the-wall among hole-in-the-walls—is one such. Here, drunk patrons rub shoulders with working couples on a lunch break and you are sandwiched between the clank of kitchen vessels and the honking vehicles on the busy Gandhi Bazar road. Its discoloured plywood benches and grubby waiters in dark green uniforms might not inspire confidence, but all that is forgotten as soon as the mint green chicken biryani and mutton dry arrives. Served on steel plates lined with plantain leaves, the short-grained biryani slips effortlessly from finger to mouth (no spoons unless asked for). Its flavours lie somewhere between the highly-spiced Andhra biryani and the almost bland Thalassery fish biryani. It is made in the Savji style. The Savjis, traditionally a community of weavers who migrated to the South from Central India, are known for their hot and spicy non-vegetarian delicacies.

“Happala ideya?” a half-drunk man with bloodshot eyes and a shaggy moustache bellows from opposite my table at Kollapuri’s. “Is there poppadam?” I am hunched over my biryani with deft attention, gnawing the tender meat from my chicken leg, too focussed to pay attention. It is a quotidian exercise, I figure.

The conventional biryani seems tame before the array of meat dishes offered in the bylanes of Shivaji Nagar. On a walking tour, unappealingly named Spare Parts Food Walk organised by Bengaluru by Foot, I discover dishes from brain to bone marrow.

Sitting in front of the dark, peppery soup, my guide for the evening Mansoor Ali persuades me to break the bones and slurp the marrow out from my bowl of paya soup. As a gentle soul who rescues the ants drowning in my dog’s bowl every day, I look at the bones sticking out of my steel bowl uneasily. In the end, the best I can do is wipe the leathery skin off the bone, slurp a few spoons of the zesty soup that unclogs my sinus and leave the rest behind. Perhaps the goat that was slaughtered for my meal that evening did die in vain. “Paya is cooked slowly overnight and the process that gives the soup its flavour is a lengthy one,” says Mansoor.

Walking further through Shivaji Nagar’s narrow bylanes, I find hawkers selling veal in fiery-red masala, birds smothered in spices skewered for roasting, and chunky pieces of beef leg bones to be had with soup. A man is filling meat paste on metal skewers before leaving it to grill on the embers of charcoal for a batch of kebab. The aroma of spices rises above the open fire stoves as evening falls. I get taken in and out of restaurants to taste teetar biryani (quail biryani that tastes like regular biryani made with malnourished chicken), kebabs (fried instead of grilled) and egg pudding.

Some of the dishes available in Shivaji Nagar are unique to the neighbourhood; like the wood-fired Khova Naan. The stuffing of milk solids (khova) encrusted in semi-hard flaky pastry is the perfect matrimony of Indian flavours sheathed in Western pastry. Mansoor and I end our tour with dessert, content that in Bengaluru the rustic local cuisine of Shivaji Nagar can coexist with the hipster global cuisine of the city’s fast expanding upscale neighbourhoods.

At Brahmin’s, with my friend’s father, we had ordered the entire menu. At the end of it, I felt a sense of contentment, the afterglow of a satisfying breakfast, on my companion’s face. Watching his grinning face over a steaming cup of filter coffee, I realise I don’t mind sharing Bengaluru’s food secrets with anyone if this is the outcome.

Tweets by @forbes_india
Learning the moves of successful startups
The Jungle Book: Disney cashes in on nostalgia for India-centric campaign