The pain of pretentious drinking

The pain of pretentious drinking. You would have felt it too. Here's a guide to alcohol snobbery 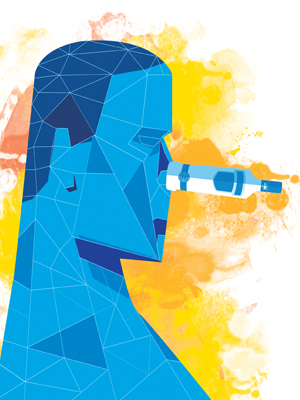 There was a time when I   enjoyed  my  beer.  A cold one on a warm afternoon, after a couple of laps in the pool or, maybe, a hard-fought game of cricket.  This was when I didn’t know what hops meant, about top and bottom  fermentation or even the right way to pour beer into a glass. I drank beer because  I was thirsty, because it made me happy and because I could feel it slosh down my gullet and, then, radiate its frothy, chilled goodness from the pit of my stomach.

Such simple joys elude me today. When I sip a beer these days, I am hunting for hidden, often rumoured, flavours—caramel, perhaps, or clove. Or I am wondering whether the brewers have been a bit too generous with the hops. Or, worse still, if it’s one of those fancy Belgian beers, I have to worry about making sure I’ve got the right glass. And, at such times, I sit up and wonder whether I might be slowly turning into a beer snob. And a whisky snob. And a wine snob. Exactly like the very people on whose heads I’d love to pour a concoction of warm, stale beer, cloying Indian Made Foreign Liquor and acrid wine.

Just who are these liquor snobs? These are men—and they are mostly men—who can suck the joy out of a Saturday brunch or ruin a contemplative evening with their relentless pedantism. Men who know the lay of Scotland better than the contours of their own country, who think all industrial beer tastes like glycerine (even the perfectly acceptable Hoegaarden), snigger at people who like to have their whisky with lots of water and ice and won’t ever open a bottle of Indian wine.

Thanks to my line of work, I am, unfortunately, familiar with this kill-joy kind and, over the years, I have attempted a taxonomy of the species to help me deal with them better—and  puncture their pomposity at opportune moments.

Of the lot, I find vodka snobs to be the silliest. Unless you are a spirits expert, all vodka tastes the same, especially if there are mixers around. But there are people I know who swear by certain brands of overpriced classic vodka which, by the way, is supposed to be neutral and without distinctive aroma, character, taste or colour. So whenever I have to entertain them, I take out this large 4.5-litre bottle that once held pricey vodka, pour some relatively inexpensive Indian vodka into it and present the contemporary flagon with a suitable flourish as the night progresses. Upon hearing their appreciative murmurs, I allow myself a slight, mocking smile. QED.

Whisky fanatics are a more evolved lot, and some of them do know their stuff. They know the correct pronunciation of Islay, can speak at length about the U-shaped lyne arms at the Talisker distillery and have a tendency to turn particularly verbose when describing the aroma and mouth feel of their favourite whiskies. But despite their loquaciousness, these are not men who suffer ignorance about whisky gladly. So I steer the conversation away from Scotland to neighbouring Ireland, to honest, triple distilled Irish whiskies that don’t need the often frivolous sensory paraphernalia of nosings, and snifters and what have you. Irish whisky, they ask? Really? Well, one in particular; I tell them about Tyrconnell Single Malt.

Tyrconnell, a 100-year-old unpeated whisky named after a champion racehorse, is a pleasant dram made by the low-profile Cooley distillery, which is located in rain-soaked Kilbeggan. Pure pot still single malt, I tell them, a couple of notches above both Jameson and Bushmills. And, most importantly, it even manages to affect the complexity of Scottish single malt. They like the back-handed compliment I bestow on the Irish whisky. Their condescension towards it softens a touch. Maybe, someday, they will try it.

Wine is a vast subject, a labyrinth full of tricky trapdoors, and it never pays to bluff about it. There is only so much you can talk about chalky soil, varietals, the devastation wrought in 19th century France by the phylloxera epidemic. Discretion is the better part of valour on this terroir, and I endure, with the patience of a saint, the sadly amusing sight of my fellow countrymen meticulously aping French pronunciations, swirling their wine in goblets and talking about the ridiculousness of blended wine. But when it all gets too much, I tell them what a wise man once said, a philosophy I aim to apply to every spirit I drink, about there being only two kinds of wine—the ones which you like and the ones you don’t.

Tweets by @forbes_india
The art of living: Inside the home of tech entrepreneur Trevor Traina
Can Novartis Chief Joseph Jimenez Cure Cancer?