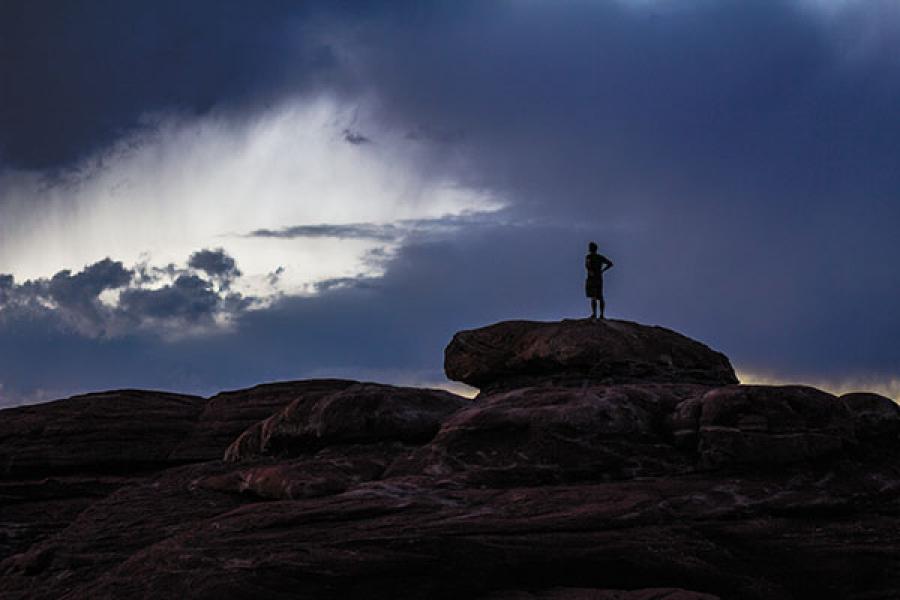 It’s a beautiful summer evening in Maine—the pine trees that I’ve wanted to see since the seventh grade encrust the hills and mountains around our campsite. A solitary songbird warbles his lonely tune across the lake. Apart from the three or four tents pitched by our neighbours, there’s no hint of civilisation at the Thomas Point Campground. Until, that is, the air is rent by the cursing of my Slovenian driving buddy, Blaž, who has managed to lock our keys inside the trunk of our car. Not the most auspicious start to our 10-day road trip.

When I was in India packing for this trip, I didn’t imagine any of the things that would be attendant to it. I had a romanticised view of the backpacking life. I’m not ashamed to say it—I needed that view. After all, I had quit my job with a major movie studio and sold my house. A move that even today elicits gasps of disbelief tinged with envy: “You sold your house? In Mumbai?” I bought a ticket for the US, with the intention of backpacking across the North and South Americas for a year. My first stop was New York, and thence to cold and rainy New England, the land of Stephen King, clam chowder and pine forests. 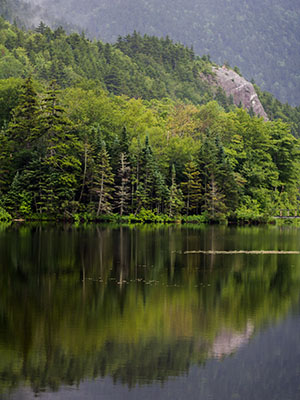 I met Blaž (pronounced “blah-sh”) in Portland, Maine, where we rented our Dodge Avenger, a muscular car, the sort I’d imagine some newly-moneyed young ruffian in Delhi would aspire to. It was built to go very fast in straight lines and handle like a pig around corners. Very American, that car. It was a long day of driving from Portland, facing the adventures of putting up a tent for the very first time in my life and then having to do it all over again when we realised we were over an anthill. And then Blaž locked us out of the car. He was rooting around in there for a beer. (We had wanted to celebrate the fact that our first day on the road had gone off without a hitch.)

Image: Vahishta Mistry
A cluster of pine trees at the edge of a lake in Maine

I’ve never been a believer in destiny or fate. It’s more honest to acknowledge that we are victims of chance, each of us a small speck in the teacup of life, like seemingly random particles suspended in fluid dictated by Brownian motion, and yet free to do whatever we want.

I find myself thrust into situations where the only logical explanation is, “it was meant to happen this way”. Consider this strange set of events with our car: Locking the keys in your rental is apparently such a common occurrence that  you can now purchase insurance for it. And yet, I remember looking over the rental form and deciding not to check the box that would provide this insurance because $10 seemed a large amount to pay for something that no intelligent person would do. Despite our self-proclaimed intelligence, here we were, looking at a minimum of $100 flying out the window and into the pockets of a tow truck company. 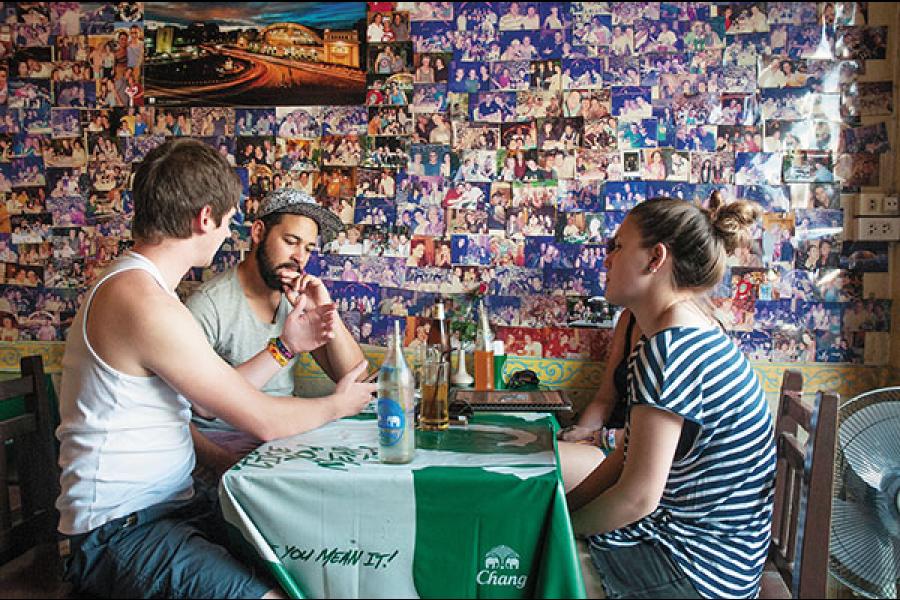 Image: Philip Game / Almay
Backpackers at a cafe in Bangkok
And that’s when it happened—the first moment of what I like to call serendipitous travel coincidence. The entrance of the tent next to ours opened and we met Gayle and Steve, a couple who had heard Blaž’s yell of dismay and ventured out to comfort us. Over the next few hours, they shared with us a few lobster rolls, some beer, words of advice on how to get into bluegrass music (their son Josh plays in a band) and where to find the best blueberries in the neighbourhood. Crucially, they also shared with us their American Automobile Association number, which provides free roadside assistance, including lockouts. Our misadventure and subsequent rescue by Gayle and Steve that summer evening in New England is just one of a long string of similar stories.

There was the time when I was in Thailand, a whole year before my epic six-month backpacking adventure in the US, when I was contemplating going to Burning Man—an extreme survivalist arts, music and culture festival/party/gathering in the middle of a dried up lake bed in Nevada. I was holed up at the Cheq-Inn hostel, in the seedy bylanes of Soi (lane) 6 in the middle of Bangkok’s red light district, Nana. Sitting on the front porch of my hostel, I was engaging in the usual backpacker routine of swapping the ‘this is where I’ve been and this is what I’ve seen’ stories. I happened to mention Burning Man and the fact that I was nervous about going alone, without any support system. Just then, Kyle, a hitherto quiet American guy in his early 30s, says, “Well, if your plans do work out and you end up going, get in touch with me and I’ll introduce you to my camp.” 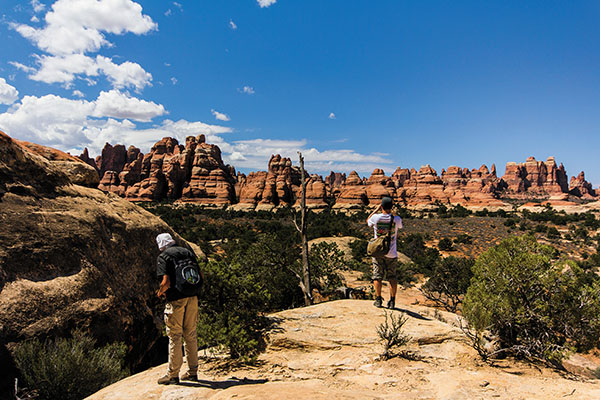 A year later, tickets booked, I get in touch with Kyle. We reconnect halfway around the world, and I have the time of my life at Burning Man without worrying about dying from exposure, because I have friends I can count on. And Burning Man is the sort of place where you need friends. While the world might see a hedonistic display of sex, drugs, art and music, attending a festival such as this is hard work. You need to carry in all the supplies you might need to survive in a desert for a week (yes, even water). You then partake in some of the most hardcore partying, introspection, spiritual awakening and depression of your life. Every night is an adventure as you explore the art on the playa, attend theme camps and workshops, meet people and experience the most fleeting friendships. And then, in a week, it’s all over. You have to pack everything out—every last little splinter, water bottle, cigarette butt and matchstick. 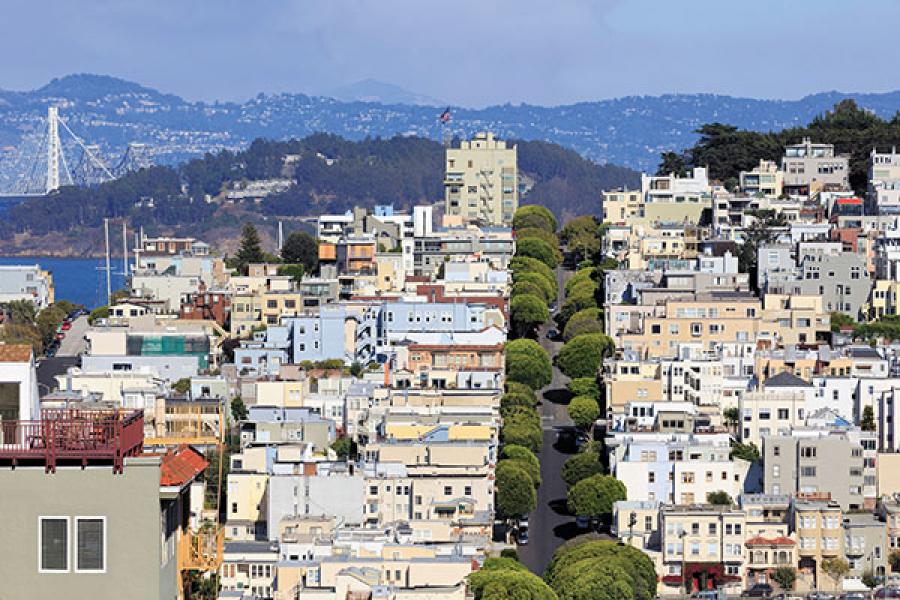 Image: Alamy
A view of San Francisco with the East Bay Bridge in the background
Once it begins, the web of coincidences just keeps adding to itself. I was in Utah, in the southwest of the US. And despite the epic landscape of red desert, prehistoric boulders, and the cornflower blue sky through which leviathan clouds rolled majestically, I was miserable. I’d injured my knee hiking: A strained cartilage, caused by an ill-timed jump off a ledge onto uncertain footing, had me doubting my ability to ever hike again. But then I met Sam who, when he’s not going on road trips or hiking in the US, works for a joint replacement company in Switzerland. “You need millet,” he said, in his impeccable European-accented English. “Some doctors claim that it’s a super-food for cartilage. Just try millet in your diet and you should be ok.” Now, I don’t know if it’s the millet or if my knee just decided to spontaneously heal, but I have since been on more than 30 gruelling hikes. A few twinges from the offending knee do make themselves known, but I haven’t faced the sort of debilitating pain I used to feel.

Another quirk of chance, which didn’t seem like one at the time, was when I met Diep, a Vietnamese student who was on the same bus as I was, on my way to Utah. I’d have probably never been to San Francisco, ended up falling in love with the city and staying there for three months, if it wasn’t for her.

Before I met her, I was despondent about the amount of money I’d been spending. I was more than half way through my budget for the whole year, but it had been just three months. I had vowed to skip the rest of the US, cursing it for the expensive first-world capitalist nation it was and decided to buy a ticket south of the border to (relatively) cheap Mexico. Then I met Diep and our deep connection changed my mind. I now had a new option—to travel to Virginia, where she would be studying, and spend those three months with her. The only catch was, two weeks after we discussed these plans she revealed the existence of a boyfriend. I ended up going to San Francisco to forget the fact that I had contemplated buying a $450 air ticket to go see her in Virginia.

The biggest consequence of visiting San Francisco was reconnecting with an old friend who now runs a startup there. He made me an offer to work for him remotely, once I got back to India. I scrapped my plans to travel to South America. Instead, I returned to India to work and save for my next journey to Germany, which I will be undertaking with my long-lost girlfriend, someone I always considered to be the one that got away.

Our reunion was so unexpected and wonderful that it led me to realise what I now believe is the truth behind these coincidences. That they may not actually be as strange or rare as we think they are. The reason we feel they’re special or that they are somehow mystically bound to solo travel is because travelling alone allows you to witness and record these experiences which are usually hidden by the white noise of our regular lives.

(This story appears in the July-Aug 2014 issue of ForbesLife India. To visit our Archives, click here.)

Tweets by @forbesindia
For career growth, take challenging assignments
A Gandhi, A Gypsy And A Rushdie: García Márquez's India Connect