How homegrown dating apps are finding love in India

Leveraging their intrinsic knowledge of Indian culture and social norms, homegrown dating apps are gaining an edge over foreign counterparts, positioning themselves as means to look for longer-term relationships--and not casual dating--to carve out a market share 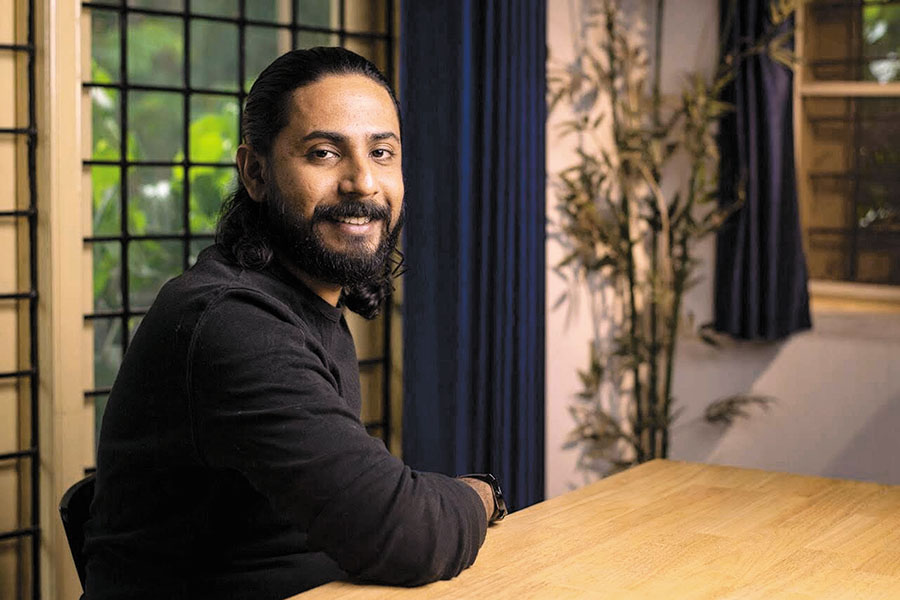 Able Joseph, CEO of Aisle, a dating app where users know what they are looking for

Looking for love through unconventional methods may seem relatively contemporary. Dating, as a concept, has existed for long in the West and the growth of technology has only facilitated people’s need for companionship. “The human desire to connect with others is enduring and fundamental. Technology has changed a lot about our lives, but it will never change the fact that humans are social creatures, hardwired to want and be wanted by others,” says Taru Kapoor, general manager, Tinder India.

Throughout history, people have turned every new mode of communication into means to look for love. In the 18th century, people placed advertisements in newspapers, while in the 1900s there were declarations of ‘radio-love’. In the late 1950s, the rise of the Darpanet—the internet, as we know it today—became a new way to meet eligible singles, while now we look for companionship through handheld digital screens.

But dating, as a concept, took a while to find its way to India. Before the late 2010s, there were no significant players in India’s online dating industry. Although platforms such as Matchify and Dil Mil did exist, they had not acquired widespread recognition. All this changed dramatically when US-based Tinder arrived in 2016, followed quickly by other international giants such as Happn (2016), OkCupid (2018) and Bumble (2018).

India, however, did not perceive love the way the Western world did, and did not accept the casual approach of international dating platforms. Consequently, these apps had to learn to speak in a language that Indians would understand. “What makes India different is that we have a generation of young women who are changing things by saying, ‘I want to decide who I’m with’,” says Melissa Hobley, global CMO of OkCupid. 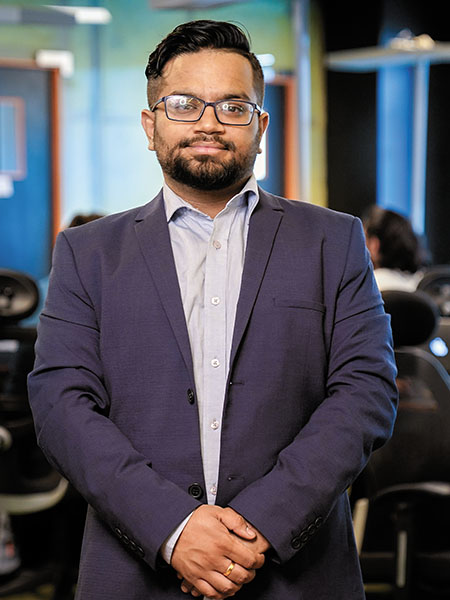 Another dating platform that championed the empowerment of women is Bumble. The US-based app found resonance among Indians by making actor Priyanka Chopra Jonas its brand ambassador. “Bumble saw an opportunity to play in the middle of a fragmented industry—to bring a social network to India, where users are empowered to make connections in love, life and work, all while encouraging Indian women to make the first move in all aspects of their lives,” says Priti Joshi, vice president of strategy at Bumble.

The online dating industry in India is worth over ₹2,394 crore ($323 million), and the country is the third-largest revenue generator, after the US and China. It seems that despite the prevalence of arranged marriages, Indian youngsters are willing to break traditional norms. “In India, dating has been taboo, but love marriages have been aspirational, as can be seen in our folklore,” says Snehil Khanor, CEO of Truly Madly.

“There is this interesting tension of a generation of Gen Z and Millennials who want to push back and reject the way their parents may want them to meet someone. Additionally, dating apps serve underserved communities in India, such as the growing LGBTQ+ movement, as it enables them to safely connect and date,” adds Hobley. 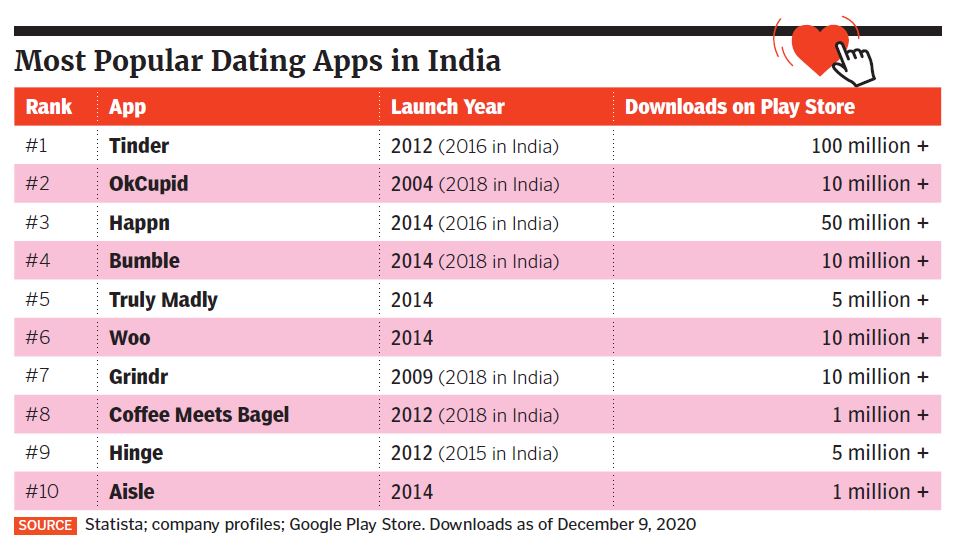 Although dating apps are on the rise in India, they lag far behind older match-making platforms where number of users are concerned. Beginning with Bharat Matrimony (matrimony.com) in 1997, online platforms to look for life partners is now estimated to be worth ₹1,917 crore ($260 million), with some of the big players being Matrimony.com, Jeevansathi.com and Shaadi.com. According to Statista, the number of registrations on Matrimony.com were around 39.82 million as of FY20, up from about 18.3 million in FY14.

In recent years, some of these platforms have tried to bridge the gap between dating and marriage by acquiring or investing in dating platforms. For instance, Matrimony.com acquired Matchify, a women-centric dating platform, in 2015, while Shaadi.com acquired Frivil in 2016. The intention was to enable a smooth transition from dating to marriage, but the dating platforms failed to take off.

Although foreign dating apps were the first to create a significant mark in India, homegrown apps are now witnessing a slow and steady rise. From having less than 10 percent market share in the early 2010s, they now have about 50 percent market share, according to Statista. Leveraging their intrinsic knowledge of Indian culture, social norms and expectations, these apps have positioned themselves not as casual dating platforms, unlike their Western counterparts, but as means to look for longer-term relationships. 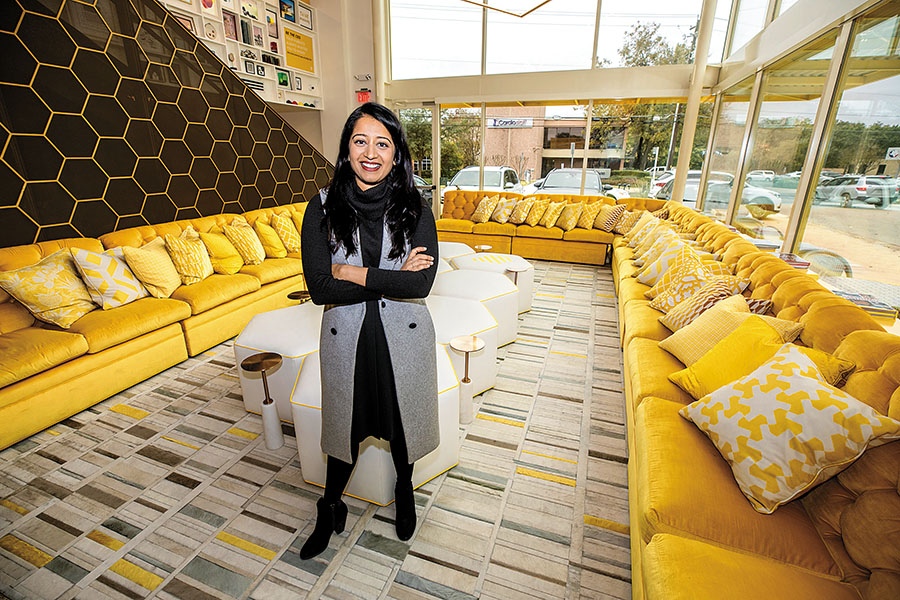 Priti Joshi, vice president of strategy at Bumble, a platform that encourages Indian women to make the first move in all aspects of their lives
Image: Arnold Wells / Bumble

For instance, Aisle is positioned as a ‘high-intent’ dating app, where users know what they are looking for. High-intent dating apps, says CEO Able Joseph, have twice the average revenue per user compared to casual dating platforms. In a cluttered market, it can be difficult for an app to find its unique selling proposition. “Every player caters to a different niche, if not a different need.”

Joseph says he didn’t want to launch Aisle by using the term ‘matrimony’ because it didn’t sound cool, but he was also uncertain about the term ‘dating’ and what it implied. He therefore decided to call it a match-making app. “We never looked at international dating apps as our competition as we sought to be an alternative to arranged marriages,” he says.

Instead of introducing a new cultural concept among its target audience, Aisle took what existed—the concept of marrying someone you love. “In India, most marriages are still between families, and the youth are conscious of that,” says Joseph, who chose to change the narrative of online dating in order to thrive in an industry dominated by international players. 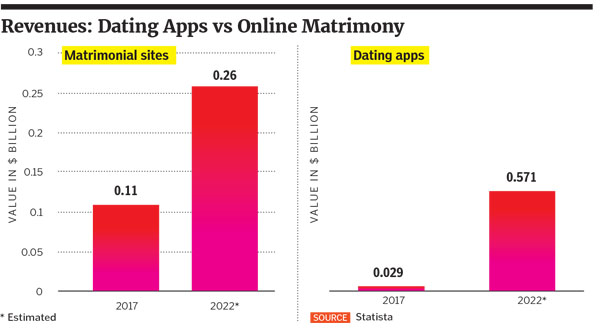 “Tinder and Aisle complement each other,” he says; users usually start with a casual dating app that makes them accustomed to online networking, and then they look for additional customisation and cultural nuances. This is when they make the shift to homegrown match-making platforms to look for meaningful, long-lasting relationships. Joseph claims Aisle has the second-largest market share in India after Tinder, and has 16 percent more downloads than Bumble, as of October 2020.

Launched in the same year, 2014, as Aisle, Truly Madly’s brand proposition is also somewhat similar—to ‘Find your forever’. Aiding this, says CEO Snehil Khanor, is its ever-evolving Compatibility Assessment Tool that helps connect people, based on preferences, interests and perspectives.

Since the app sits somewhere between casual dating platforms and matrimonial websites, its competition could be both, he adds. According to Statista, Truly Madly was one of the top three most used dating apps in the country in 2018, with more users than Tinder in eastern India. Khanor credits this success to its rigorous security and privacy measures.

He says during the coronavirus pandemic, women users have been liking twice as many profiles than they did before the lockdowns, and users are logged on to the app till later at night. Casual dating has also increased significantly in Tier II and III cities. 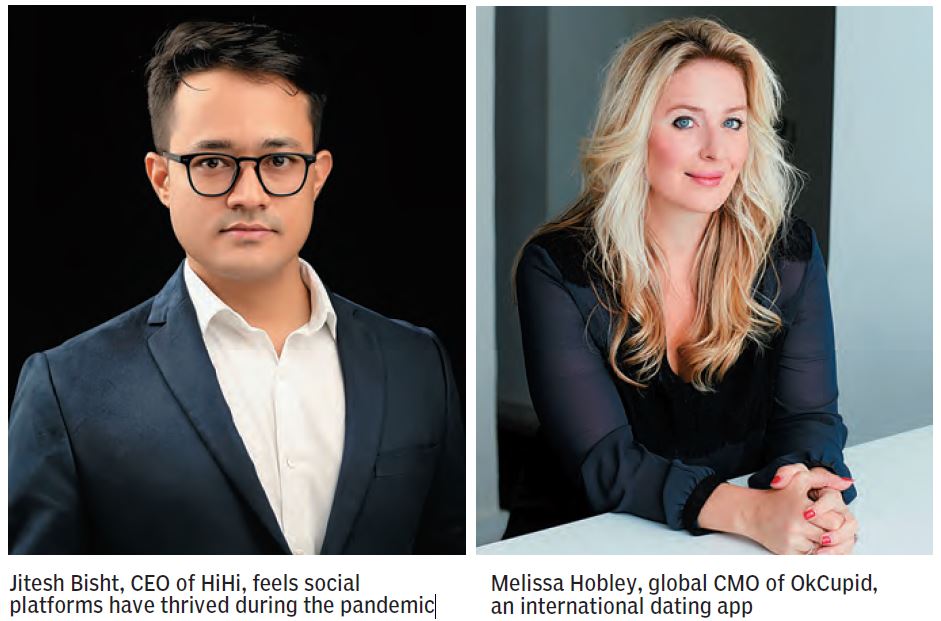 Both Joseph and Khanor are optimistic about homegrown dating apps, and claim they will have an even bigger part to play in how Indians find love in the years to come. The success of apps like Aisle and Truly Madly is encouraging similar other platforms as well. For instance, HiHi was launched this August, in the midst of the pandemic.

“Many players are building up the market for online dating, which gives us a good opportunity to monetise it. We understand the market and its cultural sensitivities, and realised that this would be a good time for a domestic player to grow and lead the market,” says Jitesh Bisht, CEO of HiHi. He adds that social platforms have thrived during the pandemic as more people took to their convenience and ease of access.

The pandemic-related lockdowns have seen the dating industry flourish, as people began to transition to an increasingly online life. Joseph points out that users seemed bored in the first half of the lockdown, resulting in more matches on the platform but shorter conversations. Whereas in the second half of the lockdown, users began to feel lonely and looked for meaningful conversations.

“We observed a 38 percent increase in video calls from March to May,” says Joshi of Bumble. “People want to feel more secure, while having fulfilling conversations that could lead to a new relationship. Video calls are proving to be a great way to form these relationships.” Highlighting a direct connection between lockdowns and increased online activity, Hobley says OkCupid could almost time the lockdown of any city and the ensuing increase in messages and likes on the platform.

Some trends that emerged during the pandemic and are likely to stay include ‘pre-dates’ to explore virtual dating, and video dates to meet someone for the first time; individuals have also begun to rethink their priorities regarding the kind of people they are open to meeting.

“Covid-19 has only been an accelerant to what we already knew at Tinder: That a connection formed digitally is just as valid and legitimate as one formed in person,” says Kapoor.

Tweets by @forbesindia
CEO David Taylor discusses P&G's revival and campaigns for equality
Booking travel in 2021? Here's how to protect your investment