Made in India Is Not Equal To Made By India

In an interview with Forbes India, Lord Bhattacharyya, Chairman and founder of the Warwick Manufacturing Group shared some of his thoughts on the role played by academia and top management in the R&D of a company 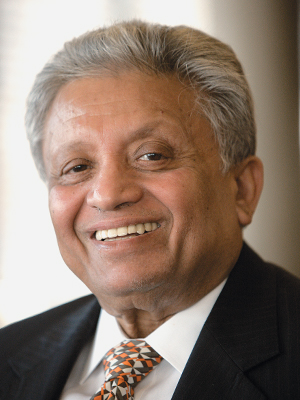 Lord Bhattacharyya is the chairman and founder of the Warwick Manufacturing Group (WMG). An expert in the field of manufacturing, he has played a critical role in building WMG as one of the top R&D destinations in the UK. He is a believer in industry-academia partnerships and works closely with several companies around the world. In an interview with Forbes India, he shared some of his thoughts on the role played by academia and top management in the R&D of a company. Here are the excerpts:


Ambition of becoming a global company
Well, this is a thing not just true for India but for any other part of the world. In the end, you have a product, and your product has to be globally competitive from the point of view of technology, pricing, quality… Everything. Now, it is an open market. So, it has to compete with the best in the world. As long as the market is within India, and you know there are areas of no competition or let’s say not great competition, you can survive.

But in a company like Tata Motors, you know when the company decided to build its own car, it was not copying anybody, it didn’t take the design from anybody. It was the first truly Indian car. It is an aspiration of Ratan [Ratan Tata] that India should have its own car. Korea has its own car manufacturers, the Chinese are doing it, the Japanese have it… every country in the world is doing it. So, for a country as large as India, it was actually amazing that the Tatas decided not to take the easy option of getting a licence and making a car but building one on their own. That requires a lot of R&D, a lot of know-how. A lot of cooperation and Tatas did quite well to produce the Indica. It was Ratan’s aspiration and you saw an Indian company building a car without any assistance from any other company in the globe.

And you know car companies take a long time to evolve. So, you did the first one, which worked very well, you did the second one which is much better and now you have a series of cars which have to compete with the best in India. And there are many other car companies in India where they depend on their headquarters like Korea or Japan for R&D and they make it in India because for them it is the Indian market. They do some R&D, of course. But in Tatas’ case, they are doing their own R&D, they experiment, they have a Tata Motors Technology Centre in the UK in order to be able to exploit the research and technology. And therefore if they didn’t do R&D, they would never survive.
And they are getting the best talent from India or abroad.

And you know Rome wasn’t built in a day, it takes time. Look at the Nano; it was an aspirational car and the world was amazed how India and Tata Motors came up with a concept like the Nano. No matter what’s happening in India, such breakthroughs take time to penetrate the market and the Nano is slowly getting there… this car is good, the one after that will be better. Therefore, you can see without concept, aspiration and understanding this would never happen.

On industry-academia alliance
There are Indian companies who are doing that, but compared to the size of India it is patchy. One of the big reasons is that India has this short term or, let’s say, license mentality. What happens is that they want to do something quick. And if we can get a license and make money out of it, it is great. But that’s changing and India hasn’t got any shortage of brains. People are very intelligent, very science-oriented but again there is a culture within both academia and industry that academia is not interested and industry will work only with a few consultancy companies. They must know that it takes two to tango and they must understand each others needs. So industry has to invest in universities and universities must allow their staff to work with industry; that culture takes a long time to develop. Even in the UK, it took a long time to develop but it is happening and I am positive it will take shape.

Take, for instance, in cars, by and large, most of the cars produced in India are foreign cars. So, they don’t require any R&D, do they? As more and more products are made, you know there is a difference of made in India as made by India. Made in India because of the labour cost, because there is a market, which is what basically everybody does. Made by India is an intellectual property. And that’s the difference. There should be more and more products made by India not only for the indigenous market but also for the world. And that is the reason when you talk about Tata Motors, I am amazed that when they produced the first car, the speed at which they are moving so they got the Nano, bought Jaguar Land Rover, making a huge penetration in world markets. And if you look at Bharat Forge, it is also doing extremely well. They have excellent technology, they believe in their people being trained and it is a culture now.

Also in India everybody wants to become MBA. But MBA’s don’t produce products. They can help you make money in the short term. When you talk about India, when you talk about R&D, it is for products. And unless you have your own indigenous products made by India, you know you will never succeed.

Role of Top management
Of course without leadership, nothing happens. Let’s face it. Ratan is an amazing person… He understands technology and he visits many, many places where technology is being developed. Any chance that he could exploit that technology, he would do so. He has got the grasp of technology and you need that sort of people to motivate your people. I mean when he comes here at Jaguar and Land Rover, people get excited because he asks them not about how much money they are making but about technology, about detail and understanding. And I think the more leaders you have like that, the better it will be. But to be able to be that, it requires a greater understanding of what’s there in the world. But in India you have got a management culture, a consultancy culture which cannot build products. They have no understanding. And it is not that India doesn’t have talent.

Tweets by @forbesindia
Affordability, Not Unavailability Of Food, Is Increasing Starvation
Podcast: BCCI And The State of Indian Cricket