How Milestone Capital's Rubi Arya overcame personal tragedy to provide stability and growth to the PE fund. Here's her story in her own words 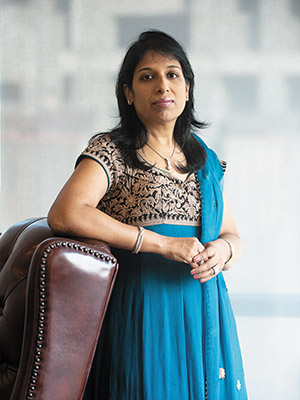 Rubi Arya took over at Milestone Capital Advisors, one of the biggest home-grown private equity funds, immediately after her husband Ved Prakash Arya, Milestone’s founder and CEO, passed away in a freak accident in August 2011. Rubi was advised to sell the business so that she could deal with her personal loss without having to shoulder any additional burden. But with the encouragement of her employees and some well-wishers, she decided to stay on. Two-and-a-half years on, she has taken Milestone to a different level and is now ready to launch a new fund.

It was not even a week since the tragic accident that took Ved away from our lives, and I was already going through a metamorphosis.

Ved was my husband but, more importantly, he was the creator of Milestone, one of the biggest domestic private equity players in the real estate space in the Indian market, managing around Rs 3,900 crore. On August 25, 2011, Ved was struck by a falling tree in a park while we were out for a morning walk in Versova, Mumbai. He was taken away from us in the most unexpected way. He was only 42.

We decided to have a board meeting to induct me and to give a message to the outside world that we were in control of the situation. The family held 88 percent in the company and after his death I had no choice but to step into his shoes. I did not know how this would turn out in the end, but at that point I decided to go with the flow.

Everyone in the office was standing by our family. I started coming to office within a month’s time. I clearly understood I had to step in. But I did not know how to go about the whole situation and started seeking advice. I started meeting Ved’s friends, who were all well-known people.

I met up with well-wishers and past employers of Ved who were very supportive of me. Everyone echoed in one voice that it was a tough business but it had to be my personal decision. This entire thing had fallen into my lap at a time of personal trauma. Now, I had to decide where to take this ship.

Ved had built an institution over the last four years, which was running on systems. He always believed in organisations that will survive the test of time. It should not be dependent on one person. I remember him telling me that he had gone to meet an offshore investor who had asked him ‘what if you were to be run over by a bus’? This was much before he passed away. Ved replied that it will not matter as this is an organisation that will run without him.

Milestone had around 16,500 investors in nine funds. The average ticket size was around Rs 25 lakh. We had a responsibility towards these people. There were queries after Ved’s death and Navin Kumar, who heads fund raising and investor relations, and his team had this harrowing job of talking to the investors.

The first step was not to take in new money. The existing money was getting deployed into projects. Wherever it was necessary, we told the investors that the fund had closed subscription.

It was important for me to be strong despite my personal loss because the employees were also looking at me as a guide, leader and mentor. I had to show them a face that they would respect. I had to position myself in Ved’s place. That was the challenge. Ved meant so many things to so many people. He was not just an employer but a father figure to many.

What also helped me is the fact that I am, by career, a human resource person; I knew how to manage the expectations of people and that is crucial in any management. My last job was with Kingfisher Airlines and people management came naturally to me.

At Milestone, however, the learning was that I had to manage a team of best-in-class PE professionals. I knew the importance of managing the task versus relationships dynamics with my top executives and striking the right balance. Further, it was important to align their interests to the firm, for which a long-term incentive plan was devised as a retention and motivation tool.

Earlier, I was the boss’s wife. Today, I’m the boss. But the employees were very encouraging. At the same time, I had to give the employees an assurance that their future in the organisation was secure.

I don’t need to tell the people out here how to run their departments. The organisation follows a strong process when it comes to making investments. There is a system that the company follows and if you stay true it in a disciplined manner, then much of the issues are in control.

Initially, I set myself a target for understanding the core business. That meant a lot of learning in the private equity space. I put my mind to figuring out how investments were made. I did not have any background in this industry. I’m not a finance person. But my background in engineering helped me understand the quant [quantitative analysis] side. My role was to create a big-picture vision and be a brand ambassador and to create an ecosystem where professionals like Alok Agarwal [the managing partner and CEO] and Navin Kumar [Executive] Directorcould function effectively.

Milestone was a firm started by people, who came here in 2007. These were people who were professionals, who were not wizards in the PE space but extremely strong on operational hands-on experience. They also did not have any institutional backing. It was the first PE fund to go to the average retail household level where they could invest in the real estate story of India. 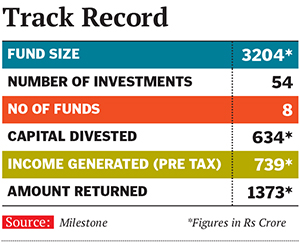 They built a model where they could do easy investments and divestments because the fund sizes and ticket sizes were small. Real estate is about understanding value and how to create it and harvest it. The team had put in a system to get the timing, the asset class and the location of investments right.

Our average fund size was around Rs 500 crore. We were deploying these funds in seven to eight investments. That meant we were staying with quality developers with a good track record and in smaller projects.

We created a sweet spot for ourselves where the developers started to like us for our speedy execution. Once we liked an idea, we never sat on it for long. We simply moved in. We had also hired people on the architecture and engineering side. In the true sense, we were an active management advisory.

While I was learning on the job, I had also talked to some players in the market about selling my stake in Milestone. There were many buyers who were interested in our business. In certain cases, the talks were at an advanced stage. But as days progressed, I started to understand the business and the employees also began to gain confidence in the new boss.

There were some people who advised me to sell the business and live a peaceful life. Others told me that PE is a business of sharks, especially if you don’t have a finance background. There were suggestions about getting into a joint venture or to sell my stake and move on. But while negotiating with buyers, I realised that they were not valuing the platform for the potential of this business. What Ved had built was a highly diversified business portfolio where the potentials needed to be unfolded.

I remember doing one week of deep thinking. We had an employee meet-and-greet in April 2013 at the Mumbai Cricket Association, Bandra, in Mumbai, and that is the time I announced that we have shelved plans to sell stake and, instead, had to focus on growing the company.

They were all taken by surprise. They were uncertain at that time. Not too many people had left us. The strategic functions had remained untouched. There were no strategic exits. We had 45 investments and Ved had built some excellent business partners over his tenure.
Work continued to happen. Working is a lot about how relationships are built. I feel that while businesses make money, they actually build relationships. If you stood by your investee companies and helped them, then they would also stand by you.

After understanding the companies, I decided to meet the distributors. Their confidence in our products was immense.

The business was as usual. There is no rocket science at the end of the day to understand the issue and provide a solution. If you can’t do it, then there are people who will help you do it. We also got a sort of advisory council made to look at tricky operational issues.

Over the years, we raised around Rs 3,900 crore and now we have been returning money to investors from year one itself, which now comes to around Rs 1,500 crore, as a lot of our investments were in rent-generating assets as well as self-liquidating residential projects.

Considering the fact that we closed our first fund in 2008 and raised eight more over the years, we feel very proud that we started returning money early on.

Our core funds are related to real estate and there was one piece that was pure private equity which was sold to Quadria Capital in 2013. The fact that we were returning money added to investor confidence. More than half of our investors went ahead and put money in other funds belonging to us.

We are in the process of raising a new fund now. Again it is in the real estate space and our target is around Rs 500 crore. We are also looking at a quant strategy fund in the near future.

I think no experience and training in life goes waste. Here I mean those harrowing moments that are supposed to push you down can also eventually be used to garner strength. These are the moments that define you as a person. If you ride them well, life becomes more meaningful and satisfying in everything that you do.

Tweets by @forbesindia
The Best Whiskey in the US, from Under a Bridge
Finolex Industries: Building a New Identity