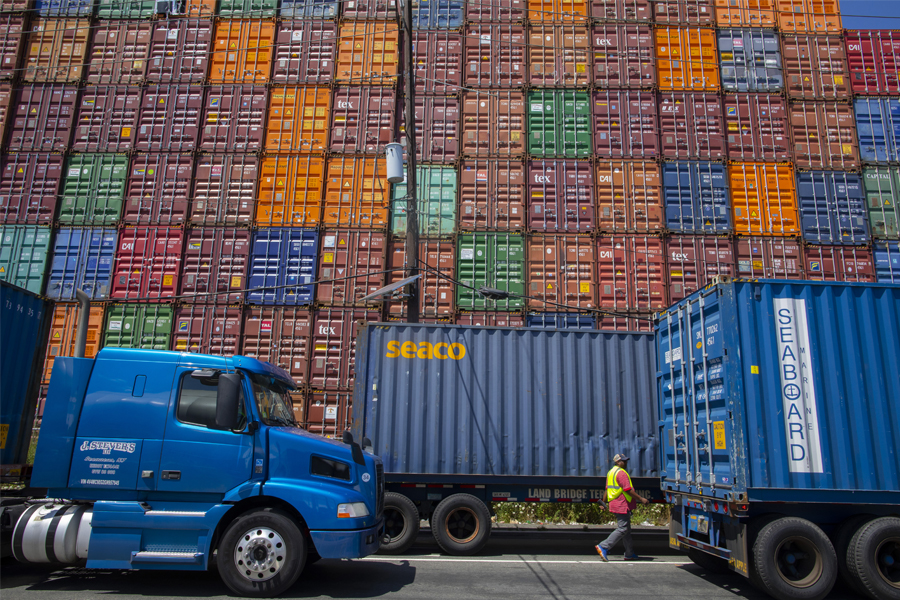 Shipping containers in Port Newark, N.J., on Aug. 3, 2022. The port at Newark is having to accommodate more than 200,000 empty containers. (Ashley Gilbertson/The New York Times)

WASHINGTON — Daniel Maffei is at once a crucial player in the campaign to subdue inflation and a figure virtually unknown outside the confines of his wonky Washington domain.

He is chair of the Federal Maritime Commission, a small, traditionally obscure institution that has been thrust into a central role in the Biden administration’s designs on taming soaring prices — a menace that could determine which party next controls Congress.

The commission regulates the international shipping industry at American ports, an element of modern life that is typically ignored but has emerged as a reason major retailers are short of popular goods, and why people renovating homes are waiting months for doorknobs.

Nine container shipping carriers — all of them foreign companies — dominate the market for moving goods between Asia and North America. For more than a year, the industry has been besieged by chaos, from traffic jams choking ports to a shortage of truck drivers impeding efforts to move cargo. With containers stuck on ships and stacked on docks, shortages and rising prices have become central features of these times.

The ocean carriers have multiplied their shipping rates and imposed a bewildering assortment of fees. The container shipping industry is on track to make $300 billion in profits before taxes and interest, according to Drewry, an industry research firm.

The White House has seized on these two realities — soaring prices and record profits for carriers.

“One of the reasons prices have gone up is because a handful of companies who control the market have raised shipping prices by as much as 1,000%,” President Joe Biden declared on Twitter in June. “It’s outrageous — and I’m calling on Congress to crack down on them.”

Days later, he signed into law the Ocean Shipping Reform Act, which is engineered to bolster the maritime commission’s authority.

Biden handed Maffei, a former member of the House of Representatives from central New York state, primary responsibility for taking on a major culprit in his narrative on inflation.

A Plan of Attack

In contrast to the colonnaded fortresses of most of official Washington, the maritime commission occupies two floors of a nondescript office building. It commands an annual budget of just $32 million, even as the agency is now tasked with taking on a collection of ocean carriers whose profits exceed 9,000 times that amount.

Maffei, a Democrat who represented a highly contested congressional district, presents himself as a centrist and pragmatist. As the bearer of three Ivy League degrees — Brown undergrad, Columbia journalism school and Harvard’s John F. Kennedy School of Government — he brings an analytical bent that tends toward shades of gray, not the colorful vernacular of political denunciation.

Yet, Biden has handed him a resolutely populist mission: Apply force to remedy what the president describes as a “rip-off” of American consumers.

Maffei smells foul play in the fees that ocean carriers levy on American importers — so-called detention and demurrage charges for containers that sit uncollected or go unreturned, even when truck drivers are denied access to ports; congestion surcharges; and fees for “premium” and even “superpremium” services.

The commission has six months to write rules aimed at forcing shipping carriers to transport more American exports. That’s a redress to complaints from farming interests that carriers have largely forsaken them, depriving them of a way to ship exports while giving priority to the more lucrative import trade.

That Maffei, 54, is even on the commission seems a quirk of happenstance.

Raised in Syracuse, New York, he never saw the ocean until he was 11. He worked as a local television reporter before going to Washington, D.C., to work for Sens. Bill Bradley and Daniel Patrick Moynihan, followed by a stint on the staff of the powerful House Ways and Means Committee.

In the summer of 2015, having lost his bid for reelection, Maffei found himself casting about for the next phase of his career. He did not want to be a lobbyist. He approached friends in the Obama administration seeking counsel.

They told him about an open seat on a commission. His ears pricked up. The Consumer Product Safety Commission? That could be interesting. No, they told him, the Federal Maritime Commission.

He took a seat in July 2016 and was reappointed by President Donald Trump. When Biden took office, he elevated him to chair of the five-member body.

On a recent morning, Maffei entered the commission’s offices just before 9, wearing a New York Yankees baseball cap and a brown polo shirt. He rode the elevator to the 10th floor and entered his capacious suite, which is adorned with models of giant container ships and antique maritime clocks. He changed into a dark-blue suit and a tie decorated with a maritime anchor pattern.

Members of his staff detailed the new law, section by section. They are investigating reports of noncompliance by ocean carriers while recruiting enforcement staff.

“This is the law of the land,” Maffei said. “If you have a complaint about it, we can direct you to the Congress or the White House.”

After lunch in a conference room with his staff — roast chicken from a nearby Peruvian restaurant — he met behind closed doors with a delegation representing a carrier based in France.

Then he called Bethann Rooney, head of the Port of New York and New Jersey, the largest container shipping hub on the East Coast.

In a tone of weary indignation, she briefed him on the mayhem besieging her facilities.

Would it be helpful for him to visit the port? His presence could signal to the carriers that they must take action.

Yes, Rooney said. A visit could not hurt.

‘We Need Something Done’

The next week, under a pounding summer sun, Maffei arrived at the port administration building in Newark as tractor-trailers rumbled by, hauling clattering containers to and from the docks.

Inside a conference room, he walked a slow turn around a long table, shaking the hands of the dozen people assembled, the heads of local trucking companies.

The truckers were seething with disgust over the fees they must pay for holding containers — up to $150 per day per box. The carriers would not release their cargo until invoices were paid. This is ransom, one said.

“Our port is gridlocked,” said Tom Heimgartner, chair of the Association of Bi-State Motor Carriers, which represents local trucking firms. “It’s an emergency. We need something done here.”

Traditionally, truckers have been reluctant to file cases for fear of angering the carriers. Perhaps the atmosphere of contempt had changed that calculation.

“It sounds like they are treating you like such dirt,” Maffei said. “I’m not sure you have anything to lose.”