Hau Lee envisions a system that benefits buyers, consumers, workers, and the environment 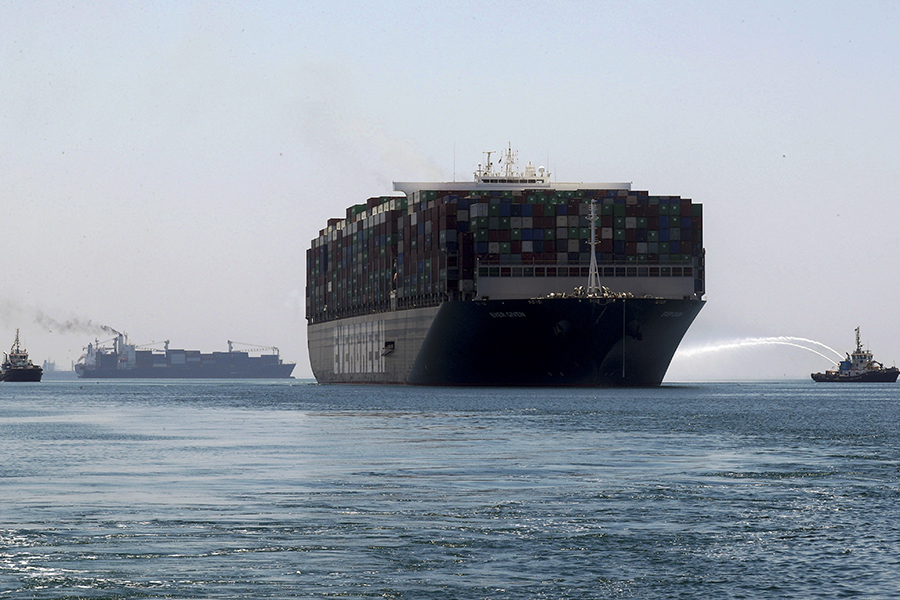 Most people never give a thought to the world’s surprisingly fragile trade networks until they break.
Image: Amr Abdallah Dalsh/ Reuters

Supply chains are having a moment. In March, one of the world’s largest container ships got wedged in the Suez Canal, blocking 10% of global trade for a few days and launching a flotilla of memes. Currently, home builders are waiting for more lumber, while a shortage of computer chips has slowed down the auto industry. Steel, coffee, ketchup, and toilet paper are also in short supply. Earlier this month, the Biden administration launched a Supply Chain Disruptions Task Force to address “supply/demand mismatches” as the post-pandemic economy restarts.

Of course, even when they’re not making headlines, supply chains are always there. Yet most people never give a thought to these invisible and surprisingly fragile networks of trade that make modern life possible — until they break.

Hau Lee, the Thoma Professor of Operations, Information & Technology and codirector of the Value Chain Innovation Initiative at Stanford Graduate School of Business, has been thinking about supply chains and their impacts for four decades. For him, the recent spotlight on his area of expertise provides an opportunity to think beyond the narrow, technical questions of logistics and efficiency, and to examine instead the bigger question of how, precisely, a supply chain might address some of the world’s most urgent social and environmental challenges.

A recent special issueopen in new window of Production and Operations Management is dedicated to Lee and his service to the field. In it, he presents his perspective in an article titled “Supply Chains with a Conscience,” which explores how supply chains can and should be harnessed to run factories fairly and minimize ecological damage. “We are adopting technologies to make global supply chains more efficient and flexible and to serve consumers well,” Lee says. “At the same time, we should be sure we are not doing harm to society — and, ideally, not only not doing harm, but contributing back.”

Lee spoke to Insights about his work and vision for supply chains that deliver benefits to buyers, workers, and consumers.

Q. Just to ground us: How do you define a supply chain?
A supply chain is a network of suppliers and service providers. It starts with the origin of ideation and design of a potential product or process, leads through manufacturing, processing, distribution, and eventually arrives at retail and the consumer for final consumption.

This network consists of three main flows that define how a supply chain works. The first is information: How is information transmitted between players in the network. The second is material. This flow does not need to be among physical products, but could instead be an exchange of work or services. The third is financial: How money gets exchanged, how incentives are derived, and so on. Importantly, these flows must be two-directional. They go from the supply side to the consumer, but also the other way if you think about returns or recycling.

Q. How has the acceleration of technological change influenced the nature of supply chains in recent years?
It has allowed companies to serve consumers much better. You can have more personalization and customization. We have seen more from robots and automation, especially in developed countries, and that has enabled more push to reshore manufacturing back in, say, the U.S. These are some of the positive sides of technologies.

But there are important negatives. For one, the factory workers in, say, Bangladesh — they are losing their jobs. These technologies replace them. We need to do something to retrain them, help them, though many companies don’t see this as their responsibility. Second, consumers are asking for more goods faster. Things are cheaper and easier to make, and so you see this trend toward ultra-fast fashion, which could create very negative environmental effects.

When I wrote “Supply Chains with a Conscience,” I was trying to say, look, we are adopting technology to make global supply chains more efficient and flexible and to serve consumers well. At the same time, we should be sure we are not doing harm to society — and, ideally, not only not doing harm, but contributing back.

Q. When and why did you start thinking about this aspect of supply chains?
When the companies I studied started globalizing, first with manufacturing in China and later in Vietnam and in Mexico, it was clear that worker conditions at the factories was something they worried about. These were companies like Cisco, HP, Microsoft — all very global and well-established. They were paying attention to their suppliers. They started monitoring. But monitoring is imperfect. Sometimes factories, or farms, present themselves well when auditors come around. Sometimes the auditing agent is bribed. In the end, truly effective monitoring is almost hopeless, though we still do it.

Then I saw companies starting to ask why suppliers were violating labor rules or cutting corners, and the answer was often because they could not make a living. So companies began to invest in helping factory owners and workers make more money. They invested in improvements in productivity and quality on the assumption that this would reduce violations. Not all humans are evil. Some people may always cheat, but most people are not born with a cheating mind. Necessity forces them to act a certain way.

Take a company I’ve been studying called COMACO, based in Zambia. It began as an organization that was committed to stopping poaching of wild animals. They hired people to track and monitor potential poachers. And then they started to try to understand why so many people were poaching. It wasn’t because they like to kill animals, but because they couldn’t survive on their farms. COMACO started investing in fertilizers and feed and education; it helped farmers create food brands for distribution. Poaching declined.

Instead of the stick, they used the carrot. The study of this carrot-over-stick approach became the genesis of the notion of having a conscientious supply chain.

Q. Where do consumers fit into this?
Consumer groups and activists are pressuring companies to be more transparent. About 10 years ago, Erica Plambeck and I studied a Chinese nonprofit called the Institute of Public and Environmental Affairs (IPE) that keeps a public record of environmental violations of companies in China. Initially, there was a lot of resistance to this. But then companies stopped viewing the organization as an enemy. It became an ally. The disclosures allowed them to have additional eyes on their suppliers.

That change of heart was fascinating to me. Now IPE is becoming quite a force in China, and this kind of disclosure is helping consumers create pressure. Some companies are even taking this work into their own hands. Patagonia is very good. You go to their website and they tell you where their suppliers are, they explain the issues and are very open about the fact that they aren’t perfect, that they have problems and are working on them.

Or consider Apple, which years ago did not disclose anything. When Tim Cook became CEO, that changed. Now every year Apple discloses its top 100 suppliers. You can go and check them; you can help Apple check them.

Q. When you map these ideas 5, 10, or 20 years into the future — what do you hope to see? Are you optimistic?
Take Apple as an example. The number of audits done by Apple was increasing for a long time and then, in recent years, it plateaued. Why is that? It’s not like the company was shrinking. The main thing I’ve found is that there is less of a need for Apple to conduct audits. As they have improved factory conditions overseas, and they have gained more visibility through other data means, they haven’t had to check on their suppliers as frequently.

That is what I would hope to see in the future: companies that rely less on checking and policing because the factories themselves are doing the work. Intel has used the term “cascading.” They recognize that if their suppliers learn that something is good for them, then they will likely pass that practice on to their suppliers — down to the second and third tiers. I think this is the future: We substitute the carrot for the stick, suppliers start doing our job, and, eventually, more and more communities are better off.

Q. And do you see that trend taking hold?
At leading-edge companies, yes. Nike, for instance, uses the term “equitable manufacturing.” They want partners to be not only efficient, not only productive, but also equitable. Are workers better off in their families and their education? We did some pilots in Vietnam, Indonesia, and Thailand showing that with this approach absenteeism goes down, morale goes up, turnover is reduced, productivity improved, and quality improves. Everybody really is better off.

But right now this is not widespread. A few companies are making a difference and, hopefully, serving as role models. I think they’ll be able to show that it is possible for other companies to start this journey. They’ll show how you can do well with this approach: Your own company benefits, your suppliers benefit, and their communities and workers benefit. We need to design the instruments to bring this change about. I’m like a crusader for this whole thing.

Tweets by @forbesindia
Ofer Bengal, CEO of Redis, on his journey from aerospace to toy design to data management
Three themes that will define businesses in the future