Magnus Carlsen is forfeiting his world title. Replacing him won't be easy

The decision announced Wednesday by Magnus Carlsen, the reigning world chess champion, to skip the chance to defend the crown in a match next year means that there will soon be a new titleholder 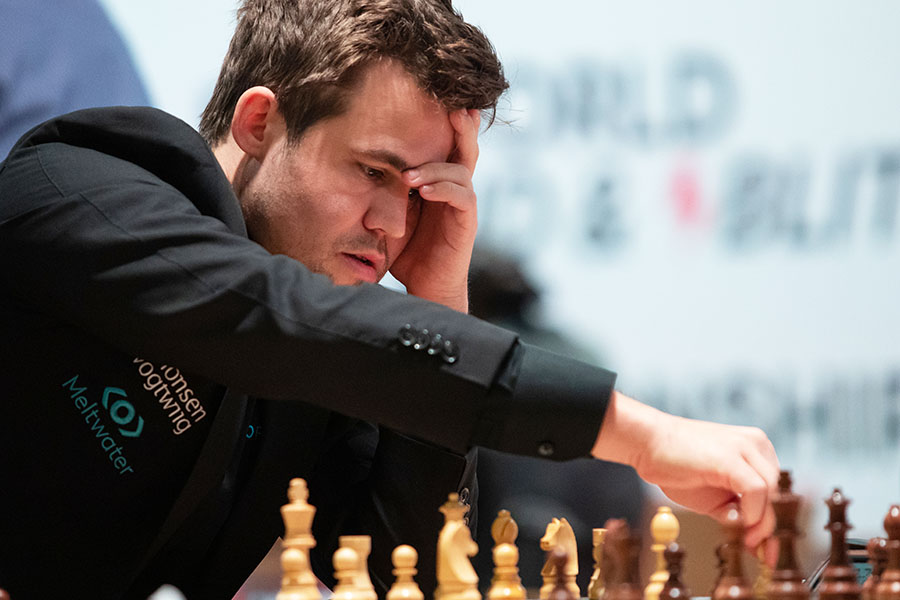 The decision announced Wednesday by Magnus Carlsen, the reigning world chess champion, to skip the chance to defend the crown in a match next year means that there will soon be a new titleholder.

And for chess, that could be the hard part. There is a real possibility that whoever wins next year’s world championship match, which will now be played between Ian Nepomniachtchi of Russia, who won the candidates tournament this month to become the prescribed challenger, and Ding Liren of China, who finished as runner-up, will be seen as an illegitimate, or at least severely diminished, champion.

Arkady Dvorkovich, president of the International Chess Federation, the game’s governing body, acknowledged as much Wednesday after Carlsen announced his decision to surrender the championship he has won five times.

“His decision not to defend the title is undoubtedly a disappointment for the fans and bad news for the spectacle,” Dvorkovich said in a statement released by the federation, which organized the world championship match. “It leaves a big void.”

While Carlsen’s decision is not unprecedented, history suggests that the new champion will have great difficulty filling his shoes.

In 1975, Bobby Fischer, the mercurial American who wrested the championship from Russian Boris Spassky in a 1972 match that captured the world’s attention because it was played against the backdrop of the Cold War, declined to defend the title. At the time, Fischer was in protracted negotiations with the federation, but when they could not come to an agreement, he chose to quit rather than play — despite entreaties from many people, including politicians, and the offer of millions of dollars for the prize fund.

Fischer’s abdication left Anatoly Karpov, who had qualified as the challenger, as the de facto champion. And initially there was a sense that Karpov had not earned that title. But he showed that he was a worthy successor by dominating the competition and holding the No. 1 ranking for nearly 10 years.

A better comparison for Carlsen’s would-be successor is what happened between 1993 and 2006, when the world championship was split between rival claimants.

Also read: How a game of interstellar chess could help establish contact with aliens

The problem arose when Garry Kasparov, who had beaten Karpov in 1985 to become champion and then successfully defended his title against Karpov three times, was slated to play Nigel Short of England, who had won the candidates matches. Kasparov and Short were unhappy with the way the world chess federation was organizing the match, and that it would receive a 20% share of the prize fund, so they formed their own organization and negotiated their own deal. The federation retaliated by declaring their match illegitimate, stripping Kasparov of the title and organizing its own championship match between Karpov and Jan Timman of the Netherlands, whom Short had beaten in the candidates final.

After Kasparov and Karpov won their respective matches, both claimed to be world champion. Though Karpov had the backing of the federation, most people considered Kasparov to be the rightful king, calling him the classical or lineal champion.

The federation’s titleholder faded in public esteem even more after it organized a series of tournaments to crown a champion and the winners were, for the most part, players with less distinguished pedigrees than Karpov or Kasparov.

Kasparov also continued to play, and he continued to be ranked No. 1 until his retirement in 2005, though he did lose a title match to Vladimir Kramnik of Russia in 2000, who then became widely acknowledged as the world champion.

The split in the chess world was mended only in 2006, when the federation’s champion, Veselin Topalov, lost a reunification match against Kramnik.

Competitive and legacy questions aside, though, there are other parallels between Kasparov and Carlsen that may shadow Carlsen’s successor — and have an impact on chess itself.

Kasparov is a dynamic personality who did a great deal to popularize the game. Though Carlsen is nothing like Kasparov, he has a large stake in a publicly traded global chess company (Play Magnus), has been a model for a hip clothing brand (G-Star Raw) and has staged exhibitions at technology and financial conferences. He was even on a Norwegian reality-television show.

In short, Carlsen has made chess cool, and though he is not quitting, it will not be the same when he is no longer world champion, which Dvorkovich alluded to in his statement.

Carlsen is also far and away the top-ranked player in the world, a ranking he will not lose by not defending his title. As long as he continues to play, which he said in his announcement that he intended to do, he will overshadow everyone else, just as Kasparov once did.

The title of world champion is unquestionably valuable. It is possible that whoever wins next year’s title match will gain enough in stature to be seen as a legitimate and worthy rival and successor to Carlsen. But history suggests otherwise.

Tweets by @forbesindia
Mojang Studio to ban Minecraft NFT integration
Photo of the day: Another waterlogged day for Delhi-NCR