The study would try to scientifically examine identifying available data, ascertain how to best collect future data, and how NASA can use these data to move scientific understanding Unidentified Aerial Phenomena 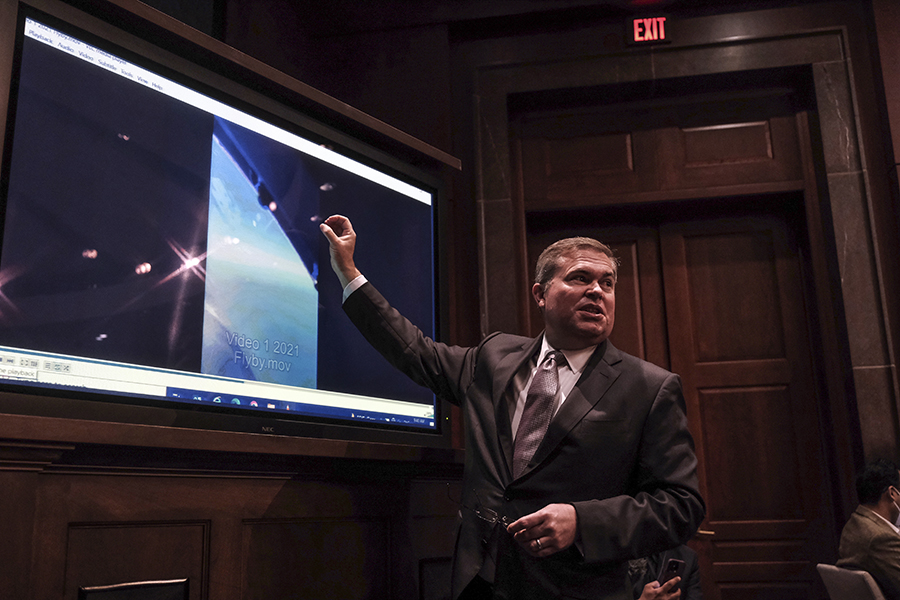 Scott Bray, the deputy director of naval intelligence, appears at a House intelligence subcommittee hearing on unidentified aerial phenomena in Washington on Tuesday, May 17, 2022. NASA is financing a study, independent from the Pentagon’s, that will scientifically examine these unexplained sightings. (Michael A. McCoy/The New York Times)

UFOs almost certainly are not alien visitors buzzing Earth’s skies, but NASA is nonetheless financing a study that will look at unexplained sightings with an open mind.

During a presentation on Thursday to the National Academies of Sciences, Engineering and Medicine, Thomas Zurbuchen, NASA’s associate administrator for science, said the study would try to scientifically examine what the federal government calls unidentified aerial phenomena, or UAPs.

The study, which is to cost less than $100,000 and begin in the fall, “will focus on identifying available data, how to best collect future data and how NASA can use these data to move the scientific understanding of UAPs forward,” Zurbuchen said during a telephone news conference on Thursday afternoon.

Zurbuchen said that examining UFO reports could be “high-risk, high-impact kind of research,” possibly uncovering some entirely new scientific phenomenon — or possibly coming up with nothing new or interesting at all.

For years a military intelligence official, Luis Elizondo, ran a little-noticed group within the Pentagon called the Advanced Aerospace Threat Identification Program. The Pentagon has said the program was shut down in 2012, but backers of the program said its work continued. In 2021, the Pentagon announced it would form a new task force to look at the issue, after a congressionally-mandated report found there was insufficient data for many incidents that had been observed.

At a House subcommittee hearing last month, Pentagon officials testified about military reports of unexplained phenomena, including a reflective spherical object speeding past a fighter jet. The officials said there was no evidence that these phenomena were extraterrestrial in nature.

NASA’s effort will be independent of the Pentagon’s and will be led by David Spergel, an astrophysicist who is currently president of the Simons Foundation in New York, which finances fundamental research work in mathematics and the sciences. NASA has not yet chosen the other scientists who will participate on the study.

Also read: The curious speed of sound on Mars

The NASA study will also consider other explanations like natural phenomena or unknown advanced technology developed by Russia, China or other countries.

At the end of the nine-month study period, Zurbuchen did not expect definitive answers. But he said the effort would help catalog the available data and ask what other data should be gathered.

“It’s for a research program that we can then implement,” he said.

While many scientists might consider UFO research as “not actual science,” tackling controversial questions is important, Zurbuchen said.

NASA now has a robust program in astrobiology — looking at life elsewhere in the solar system and galaxy — but does almost no work on the possibility of intelligent civilizations sharing our universe.

The vacuum reflects decades of congressional skepticism. In 1978, Sen. William Proxmire of Wisconsin bestowed one of his “Golden Fleece” awards on NASA’s modest SETI program, highlighting what he called a waste of taxpayer money. In 1992, NASA started a radio astronomy program to search for radio signals from alien civilizations, but Congress canceled that effort the following year.

Since then, systematic searches for alien civilizations have been mostly privately financed efforts like those conducted by the SETI Institute in California and by Breakthrough Listen. That initiative at Berkeley SETI Research Center is financed by Yuri Milner, a Russian-born billionaire technology investor who lives in the United States.

During the news conference, Zurbuchen pointed to NASA research that is trying to identify potential “technosignatures” — signs of a technological civilization — in astronomical observations. Such signs could include air pollution in the atmospheres of distant planets.

“We’ve deliberately included that into our research portfolio,” Zurbuchen said.

However, Seth Shostak, an astronomer at the SETI Institute, said he doubted that NASA would again spend millions of dollars on SETI, given the 1993 cancellation of its last program.

“NASA has stayed out of the SETI game ever since simply because it believes it doesn’t have room in its budget for a program that was often viewed as a metal duck at a shooting gallery,” Shostak said in an email.