In addition to Ben Silbermann of Pinterest, Joe Gebbia of Airbnb, and Apoorva Mehta of Instacart, founders at the top of Twitter, Peloton, Medium and MicroStrategy have all resigned this year. As the patience for visionaries wears thin, is it the dawn of the era of 'wartime CEOs'? 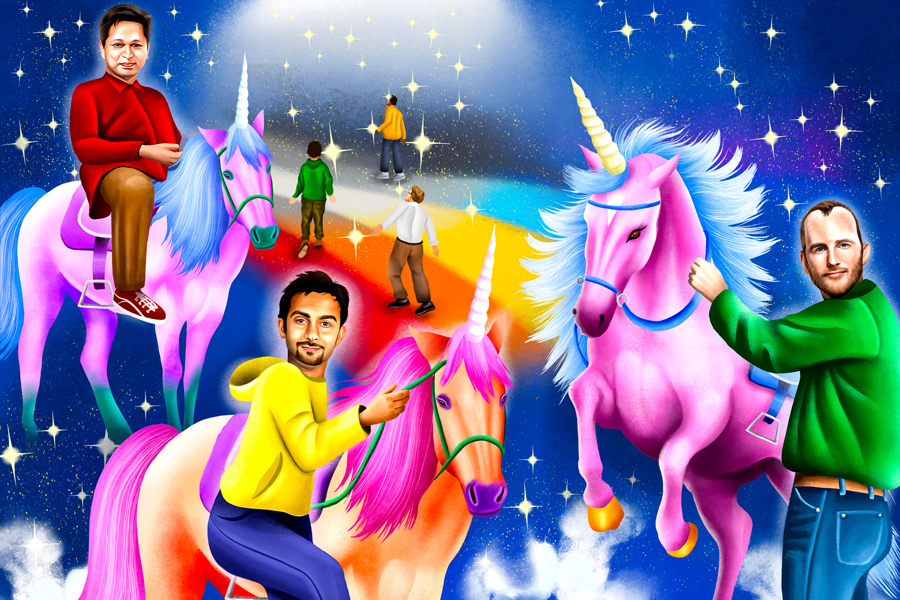 The young kings of Silicon Valley are dismounting their unicorns and signaling the end of an era. (Michelle Rohn/The New York Times)

In recent weeks, Ben Silbermann, a co-founder of digital pinboard service Pinterest, resigned as CEO; Joe Gebbia, a co-founder of home rental company Airbnb, announced his departure from the company’s leadership; and Apoorva Mehta, founder of grocery delivery app Instacart, said he would end his run as executive chair when the company went public, as soon as this year.

The resignations signify the end of an era at these companies, which are among the most valuable and well-known to emerge from Silicon Valley in the past decade, and of the era they represent. In recent years, investors have dumped increasingly large sums of money into a group of highly valued startups known as unicorns, worth $1 billion or more, and their founders have been treated as visionary heroes. Those founders fought for special ownership rights that kept them in control of their companies — a change from the past, when entrepreneurs were often replaced by more experienced executives or pressured to sell.

But when the stock market fell dramatically this year, hitting money-losing tech companies especially hard, this approach began to change. Venture capitalists pulled back on their deal-making and urged Silicon Valley’s prized young companies to cut costs and proceed cautiously. The industry began to talk of “wartime CEOs” who can do more with less, while bragging about lessons learned from previous downturns.

“All of that changed in the last 90 days, and it’s not coming back anytime soon,” said Wil Schroter, founder of Startups.com, an accelerator program for young companies. The “we’ll figure it out later” story is no longer attractive to investors, he added.

In addition to Silbermann, Gebbia and Mehta, founders at the top of Twitter, Peloton, Medium and MicroStrategy have all resigned this year.

They’re not leaving on a high note. Shares of Pinterest are down 60% from a year ago. Elliott Management, an activist shareholder known for pressuring companies to make big changes, recently took a stake in the company. Airbnb shares are down 25% from a year ago. And Instacart lowered its internal valuation almost 40% in March, as it prepares to go public in a hostile market.

“It’s surely less fun being a CEO when markets are down, the economy is trending negative and regulation is increasing,” said Kevin Werbach, a professor of business at the Wharton School of the University of Pennsylvania. “If you’re as already rich, famous and successful as these guys, there usually comes a point where staying in the saddle is less appealing than riding off into the sunset.”

“It inspired our whole generation to believe in the impossible that they could start companies,” said Trace Cohen, 34, an investor in very young startups.

Some founders of this era took their latitude too far. Adam Neumann’s spending and partying got him forced out of WeWork in 2018, even though he held a controlling stake in the company. And Travis Kalanick’s aggressive tactics at Uber resulted in his ouster in 2017, despite his super-voting shares.

The rest mostly held on through the companies’ initial public offerings. But it turns out that running a publicly traded company, with its attendant fiduciary duties, analyst calls and slog of quarterly earnings, is a far cry from the hustle and thrill of startup life. Now, as troubles mount amid a market meltdown, they’re giving up the power and control they once fought for.

Investors say they anticipate more of these resignations from founders who are realizing they now have to work harder for less (relatively speaking). “Now, they can let some executives step up, take over and grow it with different incentives,” Cohen said.

Last week, Brad Hargreaves, the founder of Common, a startup that operates communal living spaces, announced he would step down as CEO, becoming chief creative officer. The company’s head of property, Karlene Holloman, a hotel industry veteran, will take over as CEO.

The market downturn factored into Hargreaves’ decision. In flush times, he said, it’s good to have a founder at the top of the company who can sell investors, employees and customers on a grand vision. “Operations don’t really matter that much,” he said. “No one’s really watching the bottom line.”

Today’s environment requires someone with Holloman’s extensive experience and operational skills, he said. “In a tighter time, when operations matter a lot and nobody’s buying into any grand visions, you want an operator in that seat,” he said.

“A lot of founder-CEOs stick around too long,” he added.

The founders who have so far stayed on amid the downturn — and there are many, including at Stripe, Coinbase and Discord — can expect greater demands and more pressure. Stock trading app Robinhood has laid off more than 1,000 employees this year as it loses active customers.

Making matters worse, startup founders have lost their halo of positive cultural cachet — a trend that began during the tech backlash of 2017 and that has grown with the release of devastating books and TV shows about WeWork, Uber and other tech darlings.

“Once you’ve made a certain amount of money, you’re playing for status, and the status isn’t there,” Hargreaves said.

Still, there’s always the comeback story. If the market gets worse and companies start seriously tanking, we could see the reverse dynamic of founders returning to right the ship, said Werbach, the business professor.

It would be a throwback to the original cult hero founder, who commanded admiration long before unicorns roamed the Valley and who even inspired Zuckerberg’s swaggering business cards. He was, perhaps, the original boy boss: Steve Jobs.