He put Idea Cellular back in the reckoning for leadership stakes in the telecom game; he pushed decision-making to levels in touch with the ground and adopted many FMCG practices successfully 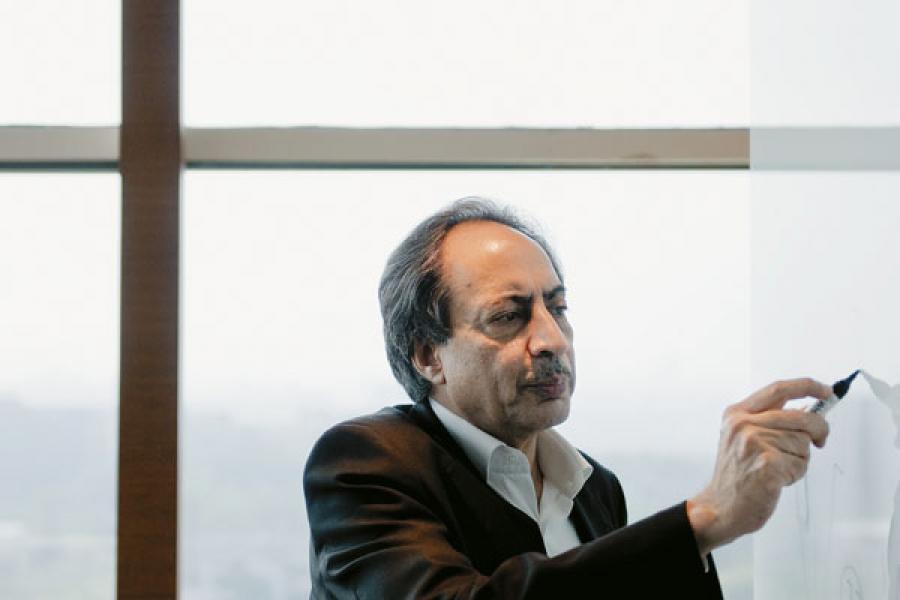 My Mentor: Ajit Mantagani. I knew Ajit well from 1973 to 1980 when we were in the same organisation [Asian Paints]

How he has helped me hone my leadership skills: Ajit had a gift of stringing disparate executive actions in a conceptual framework which conferred upon them clarity and logic.

His advice that has stayed with me: That juniors take their cue not from what we profess, but what we do.

More than 30 years after he first heard a friend recite it at Delhi’s St. Stephens College, his alma mater, Sanjeev Aga has finally gotten around to reading T.S. Eliot’s The Love Song of J. Alfred Prufrock. One of the great poems of 20th Century, Love Song is replete with allusions to Dante; philosophies of Bergson, Laforgue and talks about weariness, frustration, but most importantly — indecision. This should be interesting because Aga is leading Idea Cellular into a very definitive and decisive phase of the company.

In the last 16 quarters, according to TRAI data, Idea Cellular has increased its revenue market share from 8.8 percent to 13 percent. To be fair, over the last 18 months, its net margins have fallen sharply, much like its peers Bharti and Reliance Communications. Yet, unlike the latter two, whose stocks have remained flat over the last year, Idea has gone up 12.5 percent. In a year when there was nothing but bad news for the telecom sector — price wars, high prices for 3G spectrum, complete mess on 2G spectrum — Idea has been holding out steady. From an also ran in 2004, it has emerged as number one operator in Maharashtra, UP (West), MP and Kerala and a credible No. 3 in circles like Gujarat, UP (East) and Karnataka. Insiders say the turn-about has happened because Aga has been able to push decision making down the line to people who are interacting with customers.

He has developed sales and distribution network that reach out into rural areas, par for the course in FMCG but difficult in telecom. Also, Idea has set up a capital-light approach to sales and distribution which keep overheads under check. This is critical in the industry at this stage because of declining profitability.

“Given the limitations on Sanjeev of both resources and legacy [of earlier joint ventures], he has steered Idea quite well,” says Asim Ghosh, former head of Vodafone and now CEO of Husky Energy in Canada. Though Idea Cellular, a part of Aditya Birla Group, got off the blocks as early as 1996, it didn’t make much progress. Then there was a joint venture with the Tata Group and Birla AT&T. The resulting entity, popularly called Batata(!), too did not take off. There was a lack of clarity and direction inside the company at that time. The one good thing that happened is that in 2002 the company got out of its rather unwieldy moniker and rechristened itself as Idea. “It was Sanjeev who came up with the name “Idea” because he wanted to build a company around innovation,” says R. “Balki” Balakrishnan, chairman and chief creative officer, Lower Lintas (India), the company that manages the Idea advertising campaign. Till about 2004, the company was operating in circles like Gujarat, Maharashtra, Madhya Pradesh and Andhra Pradesh. In those days all the subscriber action was in the large markets of Mumbai, Delhi, Chennai and Bangalore.

Sanjeev Aga moved out of Idea in 2002 as the managing director of Aditya Birla Nuvo, the holding company that houses most of Aditya Birla group’s new age businesses like telecommunications and insurance. He never talks about that phase. Though people who know him talk about his disappointment with the way Idea Cellular was being directed in those days. Aga is a patient man. Rather than look elsewhere or being confrontational, he simply chose to bide his time. Once Tata group got out of the venture in 2006, Aga returned to manage the company.

And he found out that telecom sector had changed completely. Bharti had launched its outsourced “minutes factory” model, Vodafone had used the classic brand marketing approach to build a premium service and Reliance Communication was using its breadth of service and low prices. What could Idea do? It is here that Aga’s approach to life of deducing things from first principles came in handy. This in spite of the fact that he finished his MBA from IIM, Kolkata and worked in that vanguard of FMCG companies: Asian Paints and later Blow Plast. “Even then he was quiet and perceptive. I tried to push aggressive targets on to him but he would just say ‘You go back to HQ and I will send you my plan’. Very un-MBA like,” says Ajit Mantagani, Aga’s boss at Asian Paints.

He says his free thinking is because of two influences. The first concerns his childhood. His father, an army doctor, was stationed in the North East. He missed out on formal schooling in those days and therefore a lack of formal constructs. Later, when he went to study physics at St. Stephens, he found himself in a place that was witnessing a cross-pollination of ideas. “People would talk of Che Guevara. There would be talk of sociological and economic theory of the day. I didn’t go deep into them but some of that knowledge did stay in my subconscious,” says Aga. So did the ability of applying knowledge from different areas to arrive at a decision.

To start with, Aga decided to not reinvent the wheel. He outsourced the network management and also increased the presence in various markets. “He is quite happy taking something that has worked elsewhere. He doesn’t suffer from the not-invented-in-my-backyard syndrome,” says a senior executive in Idea Cellular. Over the next two years, Aga got Idea into new circles including Mumbai, signed a network outsourcing contract with IBM and made two acquisitions one that gave the company a presence in the North. The other one, of Spice Telecom, gave the company a presence in Karnataka and Punjab.

And then he picked on the long-term source of differentiation — branding. Balki says that Aga always wanted the company to be associated with innovation and solution. “At that time you could either choose a platform of “call your wife” or “a call that would change the world”. He chose the latter,” he says. So the entire campaign addressed the issue of caste, language and other social situations. And Aga is not the one to let the formal crowd the colloquial even in an exercise such as branding. “We were making the film on caste wars. And one of characters there says “What an idea, sirjee”. Sanjeev liked it and said let’s put it as our tagline. I would not have thought of putting ‘sirjee’ there but he knew it would connect,” says Balki.

He also built out a distribution model that can reach into small towns and rural areas to sell airtime. “Most telecom companies have used almost a luxury goods retailing style of opening showrooms. He has been thrifty. The Idea stores are all small in size and off the high streets,” says a senior executive with the company.

Maybe it is the Birla approach to money; maybe it is Aga’s prudence but he has shown the same tight-fistedness even in trying to win customers in metros or while bidding in the 3G auctions. “Aga knows that winning big name customers will need a lot of money and a lot of capacity expansion. He would much rather use that money to dominate the markets where Idea is a leader,” says R.C. Bhargava, independent director on the board of Idea Cellular.

When 3G auctions concluded Idea did not even bid for Mumbai or Delhi. It has preferred to bid and win 3G spectrum in circles where it is the dominant player like Gujarat, Maharashtra and MP. Relative to other top operators it has spent the least.

In some ways Sanjeev Aga has played the perfect game for a player who was out of position. He was content to defend, playing the slice instead of an attractive forehand kill to get back into position. Now Idea is in position as a worthy contender. As number portability and 3G come in Aga will need to change the tempo. It is that moment. As Eliot writes in the Love Song: “Do I dare/ Disturb the universe?” He should. The universe could do with some shaking up.

Tweets by @forbesindia
3 Jobs That Didn't Exist A Year Ago
Gary Kirsten: Leading the Best