Gary Kirsten is the Indian cricket team’s coach. Under him, the team became the Number One Test side in the world. His next challenge is to win the 2011 Cricket World Cup in the sub-continent 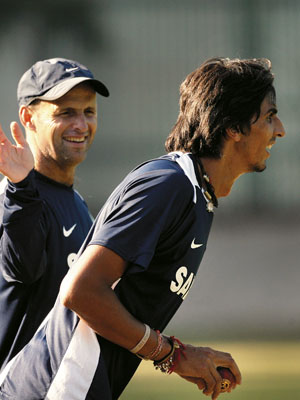 Virender Sehwag and Gary Kirsten are poles apart. Kirsten was a dour, left-handed, opening batsman during his playing days. He once made 275 runs in an innings batting for more than 14 hours, the second longest Test innings ever. Sehwag, an aggressive right-handed opener made a triple century in 2008 in just eight hours of batting, one of the fastest triple hundreds ever! And yet the Nawab of Najafgarh believes that Kirsten, who is now the coach of the Indian cricket team, has revived his batting and career.

“Kirsten has made Sehwag comfortable by asking him to look at proper shot selection rather than telling him what shots to avoid playing,” says Indian batting great Sunil Gavaskar. Sehwag says that Kirsten is the best coach he has ever worked with.

The third foreigner, after New Zealand’s John Wright and Australian Greg Chappell to take on one of the toughest sporting jobs in India, Kirsten has a mission: To guide the Indian team to win the International Cricket Council (ICC) World Cup 2011 on home territory. After having inspired the team to become the number one Test playing nation in the world — losing only two of the twenty-five test matches played under his guidance — Kirsten is now faced with the tough challenge of maintaining the team’s position in Test rankings, on the hard bouncy tracks of his home country — South Africa. That’s a tough ask  because India have won only one out of the 12 Test matches they have played in South Africa.

But he’s taken the initiative and done something that no other coach had ever done. He actually took a bunch of players well ahead of the tour to South Africa: Sehwag, M.S. Dhoni, Sachin Tendulkar, Rahul Dravid, V.V.S. Laxman, Harbhajan Singh, Suresh Raina, Umesh Yadav, Jaidev Unadkat and Cheteshwar Pujara. He knows it is these players whose form will decide the fate of the Test series for India. If they are prepared then India will achieve the improbable. The approach is typical Kirsten: Methodical, analytical and yet interesting enough to convince the prima donnas of Indian cricket to agree to his plan.

Gary Kirsten is a reticent person. Media-shy to a fault, he once left a journalist dumbfounded by asking him: “Explain this to me, just why is it important that I have a good relationship, or even any relationship, with the media?”

It is never easy being the coach of a national cricket side, especially in the sub-continent. Coaching the Indian team has its perks in terms of paychecks and fame but it also carries the baggage of responsibility. The emotional Indian fan will always give kudos to a good performance by individuals but when it comes to blame, it is directed toward the captain and coach.

Kirsten was invited to coach India in December 2007 by a panel that had Sunil Gavaskar who used to interact with the Protean as part of an ICC panel. “Kirsten’s thoughts on various cricketing aspects were clear and precise. He came across as a good thinker, which impressed me,” recalls Gavaskar. “We were looking for a coach; I asked him if he was interested and he agreed to meet us,” says the Little Master. At that time, Kirsten was inexperienced and had no medals to show unlike aspirants like Dav Whatmore who had coached Sri Lanka to a World Cup victory. What the panel knew was that Kristen would gel with the team as he had played against most of the seniors — and, more important, Kirsten was a ‘modern’ cricketer; a product of the ’90s who understood the psyche of today’s  cricketers, unlike others who had played in the ’70s or ’80s — a distant past. It is important to note Kirsten’s cricket pedigree. His half-brother is Peter Kirsten, the prolific, wristy run-getter. Kirsten himself amassed runs for South Africa – 7,289 in test matches and 6,798 in One Day internationals.

When he took charge, the Indian team was recovering from a difficult phase — not having qualified for the super league of the ICC World Cup in the Caribbean and the retirement of Greg Chappell as coach.  Ravi Shastri took on the onus of coaching the team on their tour to Bangladesh, a one-off assignment, and Chandrakant (Chandu) Borde oversaw the team’s fortunes in England. The ICC Twenty 20 World Cup-winning effort had Lalchand Rajput as coach; he continued during the tough Australian tour, where India’s fortunes shone under the leadership of Kumble.

Kirsten took over after Rajput and began to guide India’s fortunes — under Kumble — with notable wins against Sri Lanka and Australia. Kumble retired from international cricket after Australia’s tour of India in 2008. The charismatic Mahendra Singh Dhoni took over as Indian captain. Little did cricket pundits realise that the change would catapult India to the numero uno position in Test cricket.

Kirsten may have come to India with a South African cricket mindset: Driven by structure, planning and a burning desire to perform. He soon learnt that Indians approach their game in a manner different to that of the Proteas and Australians. He was also confronted with the fact that the team had super-star achievers like Tendulkar, Kumble, Rahul Dravid and V.V.S. Laxman. What’s more important was the fact that Tendulkar and Kumble were established international cricketers even before Kirsten made his Test debut in 1993. Cricket at the highest level is played in the mind and Kirsten quickly realised that in order to make his ‘wards’ successful he would have to let them emote and express the Indian way, understand their way of thinking and win their confidence.

Kirsten’s mantra is simple and very effective: “If it ain’t broke, don’t fix it.” A man who believes in preparation and process, Kirsten allows each player to express himself the way he would like to.  While he plays the role of a mentor and an advisor (almost navigator) off the field, he leaves all on-field decisions to the captain.  He identifies Gautam Gambhir as an intense person — very much like himself — and has worked very hard with the left-handed opener. He does not curb Virendra Sehwag’s aggression to take on bowlers at the beginning of the innings and motivates him, positively, to give the team a flying start. With Sachin Tendulkar, whom he terms ‘Professor of batting,’ Kristen plays the role of a sounding board and is more than willing to ‘throw’ thousands of balls to the maestro at practice to make him comfortable with different types of bowling.

One big help has been Patrick ‘Paddy’ Upton — the mental conditioning coach and Kirsten’s confidant who had conditioned players like Hansie Cronje, Jonty Rhodes and had helped Jacques Kallis negotiate a difficult phase in his career.  Kirsten also realised that a schoolmaster’s attitude would never work with the modern Indian team, which has players with big reputations and bigger egos. Wright and Kristen succeeded where the brilliant cricket strategist Chappell had failed due to lack of his understanding of the Indian ethos and, more important, man management.  An itinerant journalist confided that Kirsten and Wright are like two peas from the same pod — the only difference being Kirsten appears much calmer than Wright in a pressure-cooker situation.

From 16th December 2010 till 23rd January 2011, the Indian team, ranked first in Tests, will face a keen South African side who is placed second in the Test rankings. Kirsten has gained the confidence of his team and the BCCI and is respected by his country which may offer him the job of coaching the Protean team.  Will Kirsten’s magic continue to work? India has finally found an important resource who handles two significant aspects — the players and the BCCI — and has, so far, managed to stay away from the media glare. With the South African tour, the ICC World Cup and tours to the West Indies and Australia to follow, 2011 will be the acid test for this dour, determined coach and man-manager par excellence.

(Hemant Kenkre is a cricket analyst. He was Sachin Tendulkar’s first senior captain when the maestro played for the Cricket Club of India in 1988.)