The Segway is set to make an entry into India. So what’s it like to ride the super-scooter that moves with your body? A first-hand account: 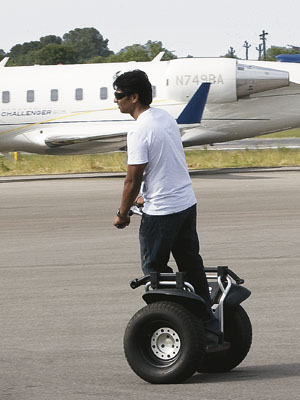 When I was 16, my father insisted the annual family trip to Los Angeles to see sights like Grauman’s Chinese Theatre would not be complete without a ride on a Segway down Venice Beach’s boulevard.

It was 2002 and the two-wheeled electric vehicle had just been released in the US, with expectations of a “super-scooter that would change the world”. America was entranced by a machine that worked through gyroscopic sensors: To go left, right, forward, or backward, the device just needed to feel a slight change in the rider’s balance. The Segway looked set to start a transportation revolution.
My father, sister and I drive an hour from LA’s crowded downtown streets to Venice Beach, a promenade inhabited only by beach bums and street performers, where we had heard the new Segway was on rent.
We join a group that comprised an elderly professorial couple, a few pre-teen Californian skaters, and another tourist family who also wanted to try out the new-fangled ride. A guide rolls out the Segway Human Transporter onto a smooth, flat surface on the boulevard, and a hush falls over the crowd.
“The Segway is very simple. It is built to stay balanced like this,” the guide tells us, standing upright on the unmoving machine. “But, just like when you walk, if you lean forward a bit…” (here the guide leans his torso forward ever so slightly) “the Segway will move forward with you to regain its balance. Just like a leg walking forward,” he concludes, laughing as if to demonstrate how simple it really is.
The guide hands us our keys and helmets and then bellows cheerily, “On you go!”
The next few hours are the most physically unbalanced hours I’ve spent to date. Leaning forward to move forward works okay, but every time I lean back to go in reverse, I feel like I’m about to fall backward into oblivion. Or onto the pavement. The green smiling face on the display doesn’t allay my fears.
When I try to turn the steering grip left or right I forget to lean my torso forward and the Segway grinds to a halt. It doesn’t help that my grip on the handlebar is vice-tight. “Arms and legs loose! Knees slightly bent!” the guide chides me, grinning at my disastrously unbalanced pose. “I’m trying,” I grimace.
It’s surprising what a machine that only goes twelve-and-a-half miles per hour can do to a person’s self confidence. After several hours, the elderly couple and my little sister are zooming around the boulevard, but the rest of us are still struggling to balance the 80-pound beast.
My father is cursing, the pre-teen skaters look ready to go back to their boards, and I’m wishing my hands were on the giant handprint of Al Pacino at Grauman’s instead of around these handlebars. Would the super-scooter change the world? Not with my vote, I thought as I collapsed onto the unmoving equilibrium of the beach sand.
Segway Inc. plans to start selling the device in India as early as next month through a tie up with the Bird Group, which has interests in travel and IT.
Two base models of the Segway, the rugged X2 for outdoor-use and indoors I2 will be imported. The company has stayed mum on the price though they say it will be lower than the $4,500-5,500 US retail price (Rs. 2 lakh plus).