Anti-Hindi agitations helped Tamil Nadu politicians build their careers. Now the state is rediscovering a fascination for the language 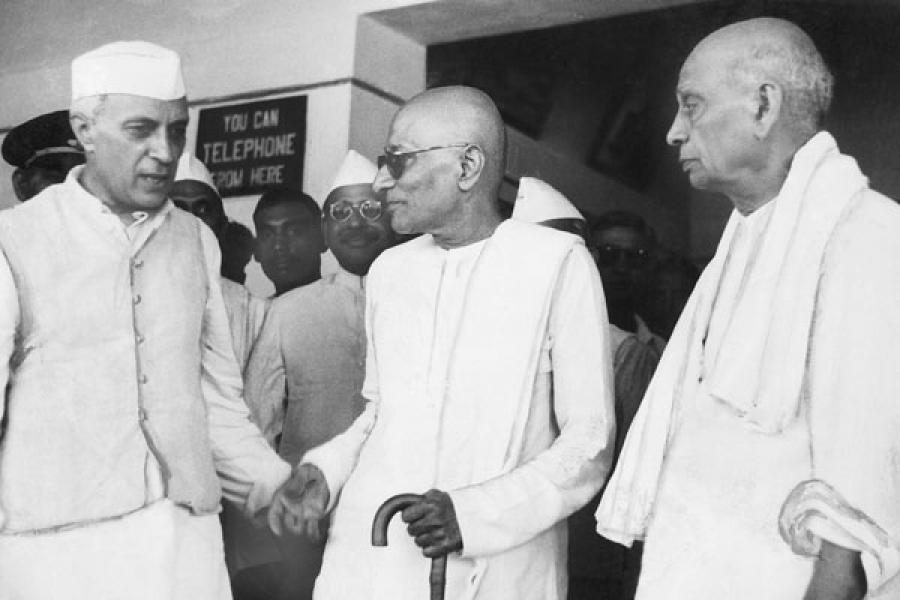 Image: HINDU PICTURE ARCHIVES
In the Line of Fire Congress stalwarts Jawaharlal Nehru, C. Rajagopalachari and Sardar Patel in Delhi in 1950. All the Tamil angst during the anti-Hindi agitation was directed at them

Shiv Sena supremo Balasaheb Thackeray answers criticism against his party’s often violent agitations in Mumbai by citing the long history of anti-Hindi agitations in Tamil Nadu. He points to the state’s official policy that has led to insignificant use of Hindi in Tamil Nadu. Thackeray’s sense of history is impeccable because Tamil Nadu established the supremacy of Tamil through blood, in much greater intensity than the Sainiks do on the streets of Mumbai.

But Thackeray may have missed a finer point. Life has come full circle for Tamils. Today, Hindi is the most popular third language for the younger generation to learn across the state. “Everybody who once opposed Hindi is praising it now and sending their children to learn the language,” says C.N.V. Annamalai, general secretary of the Chennai-based Dakshina Bharat Hindi Prachar Sabha.
Bollywood news is devoured, migrant labourers from Bihar have begun coming in, and politicians are learning Hindi to be able to make an impact in Delhi.
Tamils began protesting against Hindi as early as 1938. The Congress Party, which had come to power in the then Madras Presidency under C. Rajagopalachari, had made Hindi compulsory in schools. Tamils saw this as a cultural invasion that could render their mother tongue a secondary language on their own territory. There was a burst of protests, forcing the government to withdraw its order. Over the next decade, the Congress would try to impose Hindi several times, each time facing a bigger groundswell of protests.
The campaign against compulsory Hindi quickly became a political issue. The protests were led by E.V. Ramaswamy Naicker (known as Periyar) who had ironically given out his house just 16 years earlier to start a Hindi teacher training college. But by 1938, he had become a separatist, convinced that the South Indian “Dravidians” should form their own nation and get Purna Swaraj from “Aryan” conspirators.
The agitation was mainly sustained by students. One such man was Muthuvel Karunanidhi, who at the age of 14 showed a genius for organisation. As the protests raged year after year, the political careers of Karunanidhi and his mentor C.N. Annadurai blossomed. Soon after independence, they started a party, Dravida Munnetra Kazhagam, promoting Tamil nationalism. Their propaganda made the Congress Party look like a Brahmins’ party seeking to impose Hindi, Hindu supremacy and caste hierarchies on the secular Tamil national identity.
The flashpoint came on January 26, 1965. The day marked the completion of 15 years of the Constitution, which provided for removing the use of English and making Hindi the sole official language of the Union. Central government offices across the state had their boards blackened by tar. Protests brought life to a standstill. Scores of young people set themselves ablaze and died in the cause of Tamil. The police couldn’t control the agitation. The army came in but failed too.
It was then the Centre made the historic decision to continue with English as an official language. Tamil Nadu, till today, follows the two-language system with Tamil and English. If we are an English-speaking nation today, thank the Tamil protesters for it.
The Congress lost power in Tamil Nadu in 1967. Annadurai and later Karunanidhi became chief ministers. The protests entrenched the Dravidian parties so deeply that Congress hasn’t been able to come back to power till today. This is a story of great inspiration for any regional politician seeking to consolidate his constituency and drive out national parties.
Meanwhile, the Hindi Prachar Sabha is quite busy. As many as 600,000 students appear for its exams in Tamil Nadu each year, a number that is growing at 20 percent. In 1965, at the height of anti-Hindi protests, the number was less than 20,000. “The anti-Hindi agitation basically did our job. It raised curiosity among the people and brought them to us,” says Annamalai.

Show More
Get the latest stories, videos, and podcasts from Forbes India directly in your inbox every Saturday
Thank you for your comment, we value your opinion and the time you took to write to us!
Comments 70