Tata Tea: Champion of Cause Marketing

With the right mix of ad campaign and social awareness, Tata Tea seems to have got the perfect brew 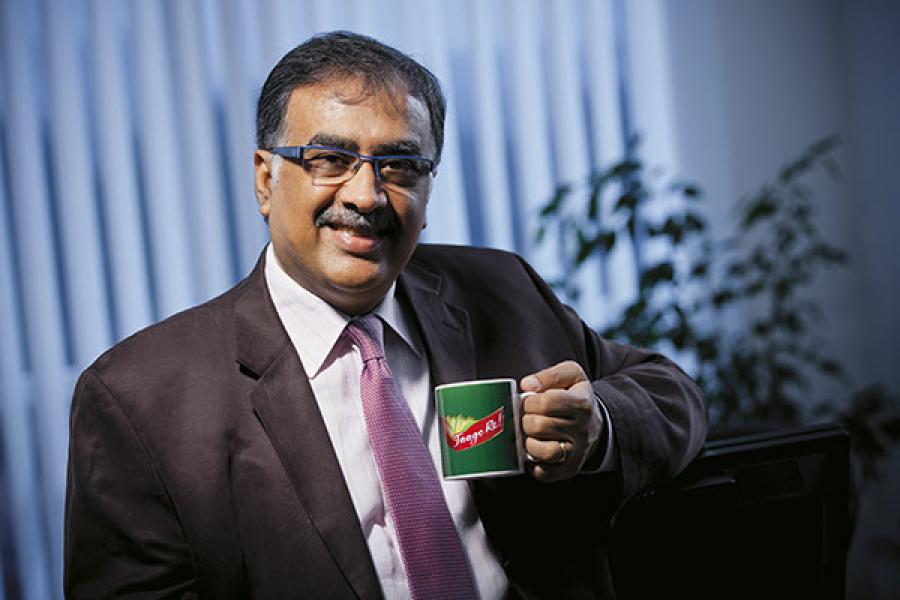 The Jaago Re Facebook page has the image of a large plain white mug with the morning newspaper next to it. The image captures the subtlety with which an approximately $1 billion brand like Tata Tea (now Tata Global Beverages) has transformed the traditional marketing of tea. The white mug has no branding of Tata Tea on it, and yet the slogan Jaago Re and Tata Tea are synonymous.

Behind the image lies one of the most successful brand campaigns to have come out of India in the last five years. This is clearly reflected in the almost three lakh page likes Jaago Re has; its nearest competitor, Brooke Bond Taj Mahal (by Hindustan Unilever), has 3,014 likes. The ‘likes’ are also a reflection of how Tata Tea changed the target audience of tea from a middle-aged person to the youth brigade hungry for change. And it did so without screaming the brand name out.

When it launched the Jaago Re campaign in 2007, it had no idea what it stumbled on to. Jaago Re—meaning ‘Wake Up’—was a brand campaign to bring all the Tata brands of tea like Agni, Gemini, Kanan Devan, under the parent brand of Tata Tea. It was a bid to take on a serious competitor, HUL. What they did, in turn, was take on serious issues and become the bridge between problems and solutions. The marriage between Jaago Re, a social awakening, and Tata Tea created a case study for any cause marketing campaign not only because of the scale of the idea but also for its reach.

While the theme matched the angst of youngsters, it also helped Tata Tea reach scale. By propagating their theme during the 2009 elections, the campaign ensured that it addressed at least 720-780 million people, those above 18 and eligible to vote.

All along, Tata Tea has been able to ride the wave of trends in social activism. After the buzz of elections died down, and even before anyone could anticipate the spate of corruption scandals that would unfold in the years to come, Jaago Re had moved on to the theme of corruption. 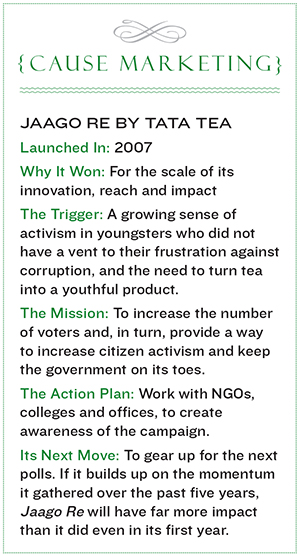 Harish Bijoor, CEO, Hairsh Bijoor Consults Inc that specialises in brand and business strategy, says, “I think the campaign resonates closely with the latent issue, which seems to touch everyone. The fact remains India is against corruption, but everyone is touched by it and participates in it as a giver or taker.”

Again, Tata Tea hit the right chord, and the nature of the scandals that brokeout soon after gave them the reach similar to the theme of elections. “What issues to take on came from them [Tata Tea], and they have always managed to lead sentiment that is around the corner,” says R Balki, chairman & chief creative officer, Lowe Lintas.

But they chose their causes judiciously. For example, Jaago Re had been running with the corruption theme for a while when Anna Hazare went on an indefinite hunger strike on April 5, 2011. The Anna movement may have been the perfect platform for the cause to be propagated. But Tata Tea executives had a doubt: Do they align themselves with Anna? With a nation that was deeply agitated and rallying behind Anna, it would have been the easiest thing for them to back him. But, after intensive discussions, the executives decided that they will not align themselves to anything political. Instead, they decided to take on a campaign that saw two lakh people pledging never to bribe again.

This is what made Jaago Re a phenomenal success. The team knew what partnerships to strike and which ones to strike out.

For example, the campaign set out as a clear-cut issue of participatory governance. So, the ‘One Billion Votes’ property was created in association with Janaagraha, an NGO based in Bangalore that works in the sector.

Together, Janaagraha and Jaago Re set out to register voters over a period of five years targeting the top 35 cities of India. With Janaagraha’s help, an online voter registration form was provided. In one year, over six lakh voters registered on jaagore.com.

Tata Tea did not stop there. Since the online format would help only those with internet connectivity, it built teams to go on the ground to help people vote. Talks were organised in over 200 of India’s largest colleges and companies to spread the message and to organise on-the-spot voter registration drives.

Gradually, the campaign also became agnostic to the medium but loyal to the message. Tata Tea put its muscle behind every single communication medium: TV, print, radio, online, and even sent volunteers to places that have no access to these forms of communication.

Balki says, “A lot of information which goes on Facebook are created by thoughts that happen through the TV campaigns, and the digital agency takes it forward.” This seamless integration of communication has clearly made Jaago Re one of the lead campaigns for tea in India.

With a crucial round of general elections coming up in 2014, we have to wait and watch if Tata Tea can still read and lead public sentiment. Balki adds, “This time, it is not just asking people about voting, but taking it one step forward to create awareness of what you are voting for.”