Abraham Moses has developed a habit of helping those in need 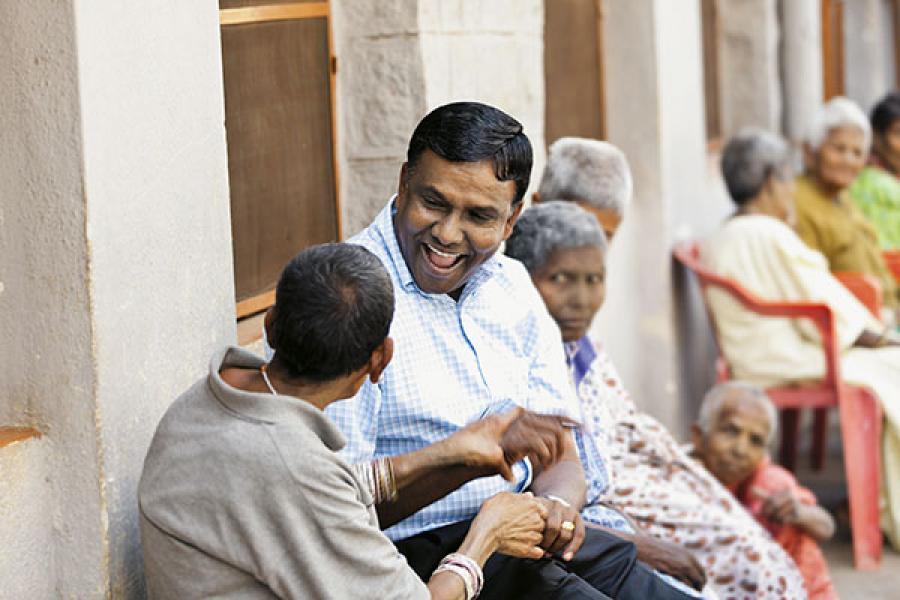 Abraham moses
The Good Samaritan Award
Age: 54
Why He Won: For his combined efforts in looking after administration and the personal welfare of Mindtree employees.
His Trigger: His firm belief in the power of doing good makes him go the extra mile.
His Mission: Wants to ensure he can do good in every area he can: Feeding the poor, clothing them, providing needy children with education.
His Action Plan: Create an ecosystem where everyone is able to look beyond themselves to the needs of others.
His Next Move: Increasing the number of graduates in Somanahalli village of Tamil Nadu’s Dharmapuri district. Increase number of engineers participating in social activities, increase social activities for people
in mid-management levels.


A flood was creeping across Bangalore on a rainy Friday night in 2004 while the city slept.

Mindtree’s engineers had done their work for the day and had no clue what was in store for them the next morning. Indeed, they never knew because of a man named Abraham Moses.

Over the course of the night, water flooded IT offices in low-lying areas. Moses, who was then associate director, administration & facility, at Mindtree, got a call in the middle of the night saying this was happening, and he rushed back to office—a journey of more than 25 kilometres.

When he got there, he found the workspace was flooded with rain water up to about 3 feet, even as more water kept entering the building. He moved into combat mode and pulled his team into action. They ensured that all the electronic equipment was removed. Through the night, his team ensured not only the safety of the equipment, but also cleaned up the premises so that not even an hour of the engineers’ work cycle was disturbed.

Ashok Soota has seen Moses’ work since 1985, right from when Soota was with Wipro, and later when he co-founded Mindtree and the years since. He says, “He’s omnipresent. He has the social orientation of being available always when an employee had some personal distress. As an administrative person, he stood out because of the energy and speed at which he did his job.” Soota is now executive chairman, Happiest Minds.

It was this combination of Moses’ personality that made Soota coin a unique designation for him: General Manager & Good Samaritan. Soota says Moses may be the only person in the world with this title.

In the beginning…
Moses comes from a big family of eight siblings. His father had a job in the army, and they were used to living in huge bungalows.

All that changed when Moses’ father retired in 1968. He had savings of Rs 14,000 and Moses says, “In those days my mother kept telling my father, buy eight plots in Jayamahal [the equivalent of owning eight 60x40 sq ft plots in south Mumbai] so that the children will be settled.” But unknown to the family, the father soon spent all of his savings helping others. The family was forced to move into a small cramped room.

“Looking back, I’m so glad that never happened [the plots in Jayamahal]. Today, each plot would be worth crores, and I may have given myself to bad habits because of the wealth,” adds Moses.

Moses was forced to quit studying while he was in the eighth grade and earn enough to support his siblings. What he lacked in education, he decided to gain through learning on the job. This ability to learn got him into an administrative role, where he began as an office boy before joining Wipro. He spent years in proximity to leaders like Azim Premji, Ashok Soota and Subroto Bagchi. His job gave him the opportunity to learn by observing them.

While at Wipro, Moses caught the eye of Soota and Bagchi, who were planning to start their own firm. It was in these relationships that Moses’ career path took a turn to lead him to his role as a Good Samaritan.

Moses was among the first employees to join Mindtree; he joined as the head of admin.

Since Moses knew Soota and Bagchi from their Wipro days, the lines of hierarchy blurred. They were friends working to build the organisation of their dreams.

Bagchi recalls that during his Wipro days, he was asked to look into an alignment with organisations in social causes. “I got Moses to do the fieldwork to see the credentials of organisations,” says Bagchi, “so we could build long-term relationships.”

Two relationships were born out of this fieldwork, and have continued till today, lasting more than 22 years. One, Technology for Social Action (TSA), which brings together engineers from various companies to volunteer for social work, and two, a relationship with Spastic Society of Karnataka.

Moses has been running the TSA programme for 15 to 20 years now. One Saturday every month, he leads a team of young software engineers on field trips to visit the Missionaries of Charity in Bangalore or a destitute home. “Not only does he [Moses] come,” says Sister Kusumam, sister superior, Missionaries of Charity, Lingarajapuram, Bangalore, “but he also brings more people to help us with our work.”

“Moses is a socially committed person,” says Indira Dave, additional director, Spastic Society of Karnataka. “We had a vegetable vendor’s daughter with us, and he noticed she was good at painting. He goes out of his way to give people an opportunity to flourish and see people happy in what they have.”

Moses is also deeply involved with the MindTree Foundation. When Bagchi and Soota left Wipro to set up Mindtree, Bagchi says, “There was a limitation in Mindtree for TSA as there was no standing for it. So, we built the MindTree Foundation.” At that stage, Moses was not involved in the running of the organisation, but “without him, it could not run as he was its execution arm,” says Bagchi. The foundation also helps differently-abled people to work in office spaces, by using Mindtree engineers to develop tools to help them.

In the meantime, Moses continued his work as the head of admin. He saw the admin staff grow from one person to 23 today. He uses much of his free time within the organisation to pay close attention to the needs of employees. Suburaju T, a member of the admin team, says, “I had an illness for which I had to stay away from work for three months. My reporting manager asked me to leave the job. I’m a blue collar employee; that would destroy me. That time Moses Sir saw me. He asked me what happened, and I told him I was asked to go.”

Moses assured Suburaju that he did not have to leave, and had a word with his manager. Not only did Suburaju retain his job, but he also got three months leave with pay. Suburaju breaks down as he narrates this tale.

Then there was the time when during a family picnic, one person drowned. “Even family members were not willing to come and take the body, but Moses was there,” says Bagchi.

Such stories have made Moses famous on campus as someone who truly cares and looks after the social welfare of everyone. Soota says, “He was always available when any employee had a personal crisis, and needed help.”

A habit carried forward
As these stories made their way to the founders, they grew close to Moses. It was this closeness that got the founders thinking that he had to be promoted. In 2010, he assumed the leadership role in the foundation and gave up his full time admin role. As General Manager & Good Samaritan, he is the face of the MindTree Foundation.

“He was hesitant to take on this position,” says Bagchi. “I had to do a lot of counselling to encourage him to take on this role. It was more of a recognition as he has been doing this work without being called a Good Samaritan.” Now that Moses was not in administrative work, he immersed himself into social work within the organisation and at home.

Bagchi laughs and says, almost every morning Moses comes up to him and says, “I need more work... Nothing deters him.”

It was this close knit friendship that gave Moses the confidence to walk up to Bagchi and say, “Subroto, you have two daughters. Let me give you a son.” Bagchi gaped. But by now, he knew Moses, and was curious about his new project. It turned out to be a programme to support children’s education in impoverished villages.

Here’s how the project developed: Some time ago, a man called Murugan, a coolie, had written to Bagchi from Somanahalli village in Dharmapuri district, Tamil Nadu, after reading about Mindtree’s work. He wanted something to be done for the youngsters in his village. He feared that lack of education and opportunities would force the youngsters to also become coolies or leave home for the cities to work as labourers. Bagchi discussed the letter with Moses, who was delegated to do something.

What started as an exercise to revamp the village school and ensure children studied beyond the eighth grade, got a boost by Moses’ vision. Moses came up with the ‘blessed sibling’ concept, which was part of a dream-to-reality programme, where one co-founder at Mindtree along with the junior-most employee, would partner together to see one child through his or her education. Moses reasoned that this would give an opportunity to an employee to motivate someone less fortunate, and for the founder to make a tangible difference to someone’s life.

Today, 15 children have been educated all through to engineering, thanks to this initiative.

In spite of taking over formally as the MindTree Foundation head, Moses has no corporate brochure to show anyone. When it comes to giving, he follows a policy of ‘what your right hand does, your left hand should not know’.

Moses is clear: Where help is needed, action must follow. His guiding light is a verse from the Bible in Proverbs, which says, “Do not withhold good from those to whom it is due, When it is in the power of your hand to do so.”