What started as a tool to manage students has evolved into a movement of sorts. And Rajkot's Bijal Damani is at the vanguard of it all 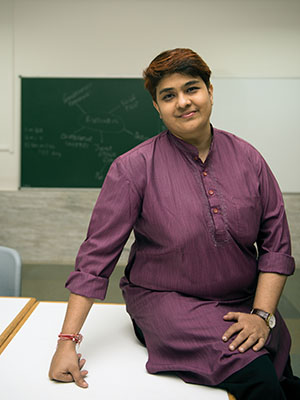 Stories of teachers transforming unruly classrooms into model groups are the stuff of legendary movies. And Rajkot’s Bijal Damani has starred in her own version of it.

In the summer of 2005, Damani was made the class teacher of ‘X-F’ at SN Kansagra (SNK) School—the largest private school in Rajkot, Gujarat. It was a distress call from the school management: Most teachers had complained of “behavioural issues” with X-F students and had refused to hold classes with them. And thus, commerce teacher Damani, who had earlier worked in the Special Needs Unit of the school, was entrusted with the responsibility of reforming the notorious group. The management assumed that her experience of having dealt with differently-abled students would come in handy.

“I didn’t go to class with any preconceived notions,” says 43-year-old Damani. “I tried to understand the kids. And I found them intelligent and full of energy.” She realised that the usual “chalk-and-talk” mode of teaching had unsettled the restless 17-year-olds. They felt claustrophobic and craved for a vent to their creative energy. And Damani offered them just that.

She had two objectives in mind. “Most students came from elite backgrounds. I had to sensitise them to the other side of the world. And I had to channelise their energy,” she says. Little did Damani know, then, that she was embarking upon something glorious, not only for her and the students but also for the school and society at large.

She introduced her students to an activity that would also double up as “commerce practicals”. It required them to function as an organisation, set up a bazaar, source goods from the local market, sell them, raise money and give it to the children of construction workers nearby. In the process, they would take lessons in organisational hierarchy, salesmanship, accounting, marketing, communication, fund-raising and charity. “I knew these students would excel at anything outside the four walls of a classroom. What I was doing was connected to the syllabus… at the same time allowing them to understand their surroundings better,” says Damani.

The first such bazaar was set up by 28 students that year. They called it the Big Business Bang and went on to pocket profits of Rs 8,000 from it. The money was spent buying a year’s worth of stationery for underprivileged children. “The students’ initial response was to party with the amount raised. But they made a choice between that and helping the needy,” says Damani, who was the central planner and supervisor of the bazaar. “Their social behaviour started to change after this activity. Their academic performance had also improved.” Her objective had been fulfilled.

But when the bazaar, meant to be a one-time exercise for a particular class, was not held the following year (2006), agitated parents flocked to Damani. “They said their children were being deprived of such practical experience. And wanted the bazaar to become an annual event,” she says. That is when Galaxy Bazaar—in its current form—was conceived.

***
Galaxy Bazaar is eight years old now. Christened after The Galaxy Education System (TGES) of which SNK School is a part, the bazaar is held annually before Diwali. Festival-centred items from dry fruits, candles and flowers to clothes, mobile phones and chocolates are bought on credit from the local market and sold at wholesale prices. Unsold items are returned to the market.

The three-day event draws advertisers from local tile and real estate companies to big corporations like Mitsubishi and Volvo. More than 7,200 students of TGES and their families attend the bazaar. It was opened to the public four years ago, and records footfalls of over 10,000 every year.

The 2014 edition of the bazaar generated profits of Rs 13.5 lakh, the highest in its eight-year-run and a 50 percent growth from last year. “We have touched the lives of over 1,800 underprivileged children,” says Damani. “Many city NGOs have now started approaching us for funds.”


In 2007, Galaxy Bazaar had donated its entire profit amount to Vishvanidam, a Rajkot-based NGO that places slum kids in schools. “We donated Rs 1 lakh for setting up a library. We bought 20 computers and a two-year internet connection for them,” says Damani. Nearly 400 students benefitted from it. 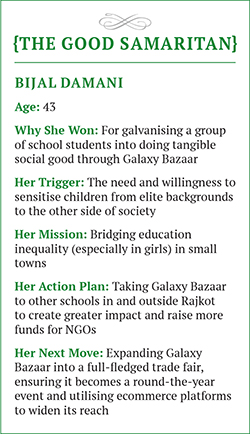 In 2011, TGES set up a separate philanthropic division known as The Mohan Scholars (TMS) into which the money raised from Galaxy Bazaar is channelled. So far, the bazaar has donated Rs 30 lakh to TMS which, in collaboration with the Rajkot Municipal Corporation (RMC), selects girls from 330 anganwadis across the city and supports their education, nutrition, clothing and transportation. There are volunteer-doctors holding regular medical check-ups as well.

“These children [from the age of three] receive the same education using the same resources that our most privileged students do,” says Kiran Bhalodia, director, TMS. “Their curriculum consists of developmentally appropriate activities. Music, art, learning through outdoor and indoor play, dance, field trips, drama and recitation, language development, physical development… our methods are eclectic and we use elements of Montessori, Reggio Emilia and Waldorf among others,” he says.

Inspired by the success of Galaxy Bazaar, other schools in the area are keen to replicate it. Damani is mentoring many such schools and helping them organise similar events. She’s also presented Galaxy Bazaar at various international events and is much regarded for it. She was invited as a Microsoft Expert Educator at the Microsoft Global Forum 2014 in Barcelona where she sought to collaborate with schools from across the world to bridge the inequality in education. Her vision and willingness to execute out-of-the-box ideas even in the most inopportune of circumstances have charmed her associates.

“Educators have immense responsibility, even more than policymakers. They are the ones who spend almost every waking moment with those who are the future. The youth need conviction. And a role model and guide. Bijal has been that guide,” says Sujata Kini, a higher secondary teacher at TGES and Damani’s colleague for over a decade. “She has challenged reluctant learners with amazing projects and inspired learning. Galaxy Bazaar is a grand demonstration of what one idea can do. She has turned the idea into an institution. It has earned great respect and goodwill in the real market.”

***
The unassuming Damani, however, wears her success lightly. She’s certain that much more is left to be achieved. She reckons Galaxy Bazaar is reaching some kind of saturation and it needs to reinvent itself. “I want to open it to ecommerce platforms so that our products reach far and wide. We have to make it a round-the-year event for greater impact,” she says.

TMS, which has grown into a vibrant community courtesy Galaxy Bazaar, expects to have 10,000 underprivileged students in its system in the next five years. “We hope to create a corpus fund that becomes a legacy gift to the city’s most underprivileged children and eliminates education inequity to a significant extent,” says director Bhalodia.

Damani also intends to extend the bazaar into a full-fledged trade fair. And she’s in talks with various stakeholders already. “We decided to take it to Morvi [an industrial town 120 km from Rajkot] and then to Baroda, Ahmedabad, and outside Gujarat. It could become a platform through which students can self-fund their education,” she says.

Some of Damani’s students from the legendary X-F class are now entrepreneurs, businessmen and successful professionals, and are sponsoring the education of underprivileged children in their own individual capacities. And that, for a selfless do-gooder like her, is the pinnacle of glory. “I feel I have guided them at an impressionable age and influenced their psyche,” she says. “That is my gift.”

Tweets by @forbesindia
American dominance: The show will go on
Happier endings: Dealing (better) with mortality and pain