American dominance: The show will go on

Given its economic and political might, it would be foolish to predict the decline of the US. It has systematically been able to extend its dominant role 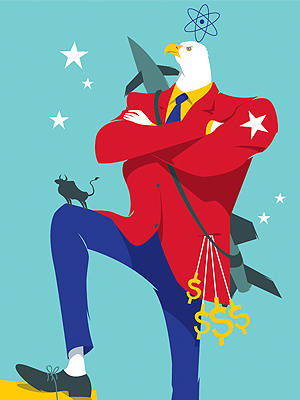 In the 1980s, the future was Japanese. In the 1990s, it was going to be shaped by the Asian Tigers. In the 2000s, it was to be China in collaboration with the other letters of the BRICS.

Predictions about the American decline are not new. Former US Secretary of State Henry Kissinger observed: “The US cannot afford another decline like that which has characterised the past decade and a half… Only self-delusion can keep us from admitting our decline to ourselves.” That was in 1961. Like the demise of Mark Twain, the news of the end of the American century has been greatly exaggerated.

There are fundamental economic, financial, political, military and social reasons to doubt that America’s central role in the world is ending.

In a 2011 article, Michael Beckley, a former research fellow in the International Security Program at Harvard University’s John F. Kennedy School of Government’s Belfer Center for Science and International Affairs, concluded that, based on economic, technological and military indicators, America was wealthier, more innovative and more militarily powerful compared to China than it was in 1991.

But leaving aside its undoubted economic power, America’s continued dominance is based on both hard and soft power, which can’t be replicated easily.

Hard…
The US remains a formidable military power. America spends around 40 percent of the total amount spent globally on defence, around six times more than China, which ranks second. The technical and economic capacity to maintain, integrate and operate up-to-date complex defence systems provides America with a significant advantage.

The strategic shift to stand-off and remote weapons systems, such as drones, as well as more technologically sophisticated weapons systems enhance its capabilities to protect its interests. Whatever the moral and legal implications of drone strikes against its enemies, America’s ability to project power in support of its interests remains unsurpassed.

Its political and economic interests increasingly dictate withdrawal from military engagements such as Iraq and Afghanistan. Reduced reliance on foreign energy supplies may allow the US to reduce its commitment to guarding crucial sea lanes such as the Straits of Hormuz and Malacca.

In the post-Cold War era, America has served as the “indispensable nation” (a phrase suggested by former Secretary of State Madeline Albright) policing the world’s conflicts. But America is increasingly wary of “entangling alliances” (Thomas Jefferson) and overseas adventures “in search of monsters to destroy” (John Quincy Adams).

Many developed countries have spent too little on defence, preferring to piggyback off US capability. The reliance on US military resources was highlighted during the 2011 European military action led by France and Britain in Libya. As former US Defence Secretary Robert Gates pointed out, European air warfare capabilities were dependent on American target identification systems, US Air Force air-to-air refuelling, drones and stocks of smart bombs.

American isolationism would have a double effect. America’s costs would be reduced, improving its budget deficit and reducing its borrowing requirement. It would also require other nations to increase defence spending, reducing funds available for other activities.

Soft…
America remains a leader in science and technology. While the overall quality of its educational systems is far from exceptional, most studies rank elite US universities as among the best in the world.

While other countries are investing heavily to bridge the gap, American innovation remains strong. US R&D expenditures are around four times greater than, say, China, where the government has decreed that by 2020, R&D expenditures will constitute 2.5 percent of the GDP. While difficult to accurately measure, the quality of scientific output in the US remains superior. A strong venture capital system supports fledgling businesses.

These factors underpin America’s leadership in high technology products, with competition coming from only a few nations.

The labour market remains flexible, albeit at high human cost. The US has favourable demographics, although the financial crisis has diminished its advantage. It still has high population growth relative to other industrialised countries, which have below-replacement fertility rates. Over the next 40 years, United Nations studies forecast that its working age population will grow by 17 percent while that of all the other major countries (except India) will decline.

The US also has higher levels of immigration, remaining a magnet for attracting talent and additional labour to supplement domestic resources. It is difficult to conceive of another country where a black man of mixed parentage could become president or so many citizens of foreign origins rise to prominence.

Although not as dominant as in earlier decades, American entertainment, fashion and style remain influential. People throughout the world still aspire to an American way of life. In the 2004 documentary, Control Room, about the Arabic news channel Al Jazeera, a journalist is highly critical of American foreign policy as well as American ethics and morals. Yet, he confesses if he had a chance to work in America, he would accept the opportunity.

Attitude…
America’s pre-eminence is based on complex and subtle systems and processes, which are difficult to replicate. A World Bank study estimated that the US derives 80 percent of its wealth from intangible assets.

America’s ability to tolerate failure is crucial. Few countries consider bankruptcy merely a step in the evolution of an entrepreneur. There is also America’s ability to admit to a mistake, at least tacitly. It lies at the heart of resolving problems. US actions in dealing with its financial problems stand in sharp contrast to Europe’s approach to resolving its debt crisis.

America’s ability to reinvent itself and change is important. Many of its economic competitors find it difficult to embrace change. Faced with problems of low growth, a lack of competitiveness and excessive debt levels, European countries have struggled to agree and implement the required far reaching reforms.

In November 2012, Chinese President Hu Jintao spoke about the need for economic and political reforms. But he simultaneously cautioned against taking the “evil road of changing flags and banners”. Circulated widely on Weibo, China’s Twitter-like micro-blog, the reluctance to make the necessary changes drew the following derisory comment from one user: “So we will walk in place until we die.”

Complacency…
There remain serious risks and challenges, any one of which could damage America’s position. There is an urgent need to address its deteriorating public finances, especially unfunded social welfare obligations such as social security, Medicare and Medicaid. State and municipal finances are poor and need attention and pension schemes are awaiting reforms; so are labour force policies. The taxation system is complex and inequitable.

There is a need to improve productivity. Recent productivity growth, achieved mainly through the elimination of many low-to-moderately skilled jobs and adoption of technology, is not sustainable.

Crucially, the political process remains dysfunctional and gridlocked. As an astute observer of America, Alexis de Tocqueville, noted: “There are many men of principle in both parties in America, but there is no party of principle”.

Dominant country…
Otto von Bismarck once said: “I am firmly convinced that Spain is the strongest country of the world. Century after century trying to destroy herself and still no success.” He might well have been speaking about the US.

The US has crafted a unique position built on its advantages in economic power, global finance, military capability and geopolitical role. While it faces challenges, America’s position is underpinned by strong material advantages as well as the export of its attitudes and values. For better or worse, it shapes global economic, financial and political agendas, influencing the choices of other nations. In making investment decisions or geo-political commitments, it may be useful to remember that America may be able to extend its dominant role for some time to come.