An Indian Relic in Oxfordshire 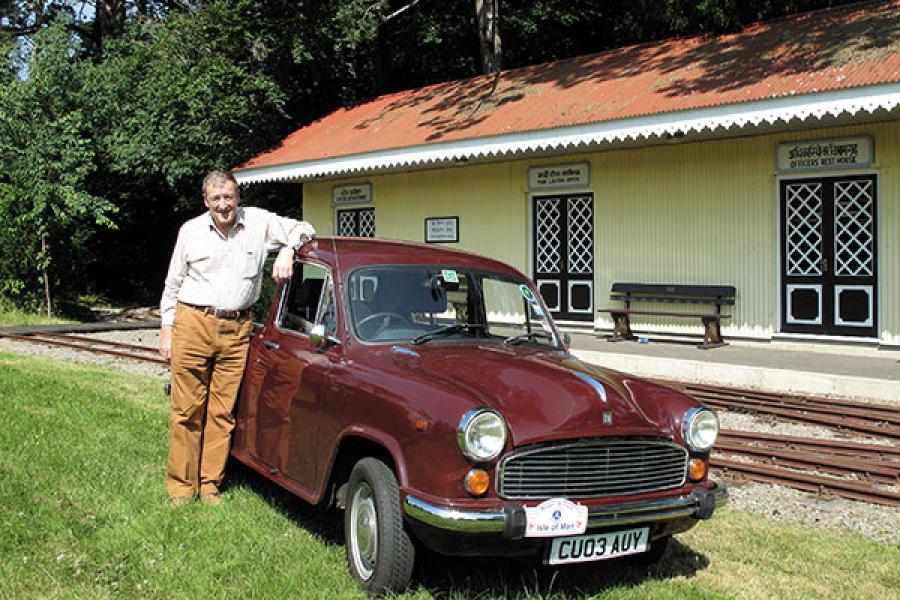 A maroon Hindustan Ambassador sparkles in the glorious summer sun in front of the picturesque Heyford railway station in north Oxfordshire. While bumping into Indians at every corner in the UK is quite usual, having the good old bulbous Indian car waiting at a quaint station by the Oxford Canal comes as a pleasant surprise. The surprise lasts till you meet its owner, Adrian Shooter, the former chairman of Chiltern Railways, a British train operating company.

Fifteen years ago, Shooter bought an “arts and crafts” style house in Steeple Aston village, shipped in a Darjeeling Himalayan Railway (DHR) steam locomotive and set up his own private railway—the Beeches Light Railway—in his three-acre garden. The 1889 British-built steam engine, used in the Darjeeling hills in India till 1962, was bought from a private collector in Chicago.

The Ambassador is a fancy of the man in love with all machines old.

“This is an interesting car,” he says, wondering how the early Indian car, modelled on the British Morris Oxford of the 1950s, survived so long—its journey from a status symbol of the rich to the humble taxi—without changing much. There have been “two big improvements”, says Shooter, a mechanical engineer in love with motion. “The disc brakes are very effective and much better than would have been the case in the ’50s. The other is the five-speed gearbox which, although being a bit ‘agricultural’ [crude], does mean that cruising at higher speeds is much more relaxing.”

A narrow lane off Heyford Road leads to his house. Once inside his garden, Shooter drives his 2003 Ambassador Classic with a 1.8-litre petrol engine alongside the narrow-gauge rail tracks. On some stretches, the Amby goes over the tree-lined tracks. The drive tries to simulate the 78-kilometre journey from Siliguri to Darjeeling, where the DHR (more fondly known as the Toy Train) and the Hill Cart Road crisscross.

The topographies of Darjeeling and Oxfordshire have little in common, but Shooter has tried to give an authentic feel wherever possible, for instance, the tracks are looped to form the figure eight. Before long, he pulls up in front of the Rinkingpong Road station of his garden railway, named after a road in Kalimpong, a hill station close to Darjeeling in West Bengal, India. 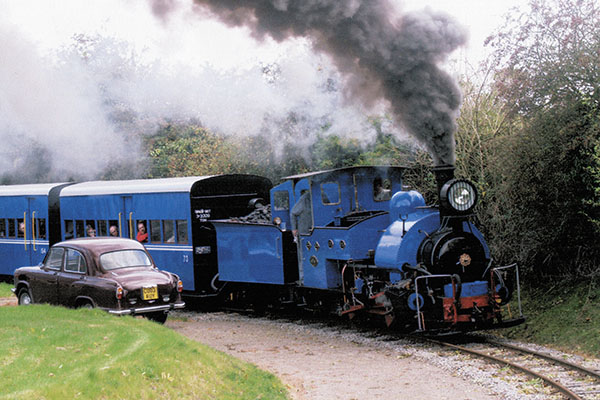 Image: Adrian Shooter
Shooter with his 2003 Ambassador Classic and a Darjeeling Himalayan Railway (DHR) steam locomotive in his three-acre garden, where he has set up his own private railway

Less than a year after that drive through Steeple Aston,  in May 2014, Hindustan Motors announced that it would stop the production of the Ambassador citing “low productivity, growing indiscipline, critical shortage of funds, (and) lack of demand”. “Very sad after what must be a record breaking 57 years,” Shooter says in an email to ForbesLife India.

As a child, Shooter always “rather liked” the Morris Oxford, on which the Amby was based. “When I first went to India in 1986, I discovered that they were all over the place, or at least Ambassadors were. At that time, the other cars were mostly old British models such as the Standard Vanguard and the Austin A40 with a few of the new Maruti Suzukis. Having travelled in Ambassador taxis, I thought it would be just great to own one.” In 2003, he bought his maroon Ambassador Classic from Merlin Garages, the UK’s Carmarthenshire-based importer in the 2000s.

Shooter and his wife Barbara are very fond of their Ambassador, and roll it out mainly in the summer “so that it is not affected by the salt that we have here on roads in the winter to prevent ice”. They even took it to an expedition to the Isle of Man in May 2013. “It is quite happy cruising at 70 miles per hour on the motorway, but [it] is a bit basic inside. It does feel like the 1950s’ design that it is,” says Shooter, who retired from Chiltern Railways two years ago. 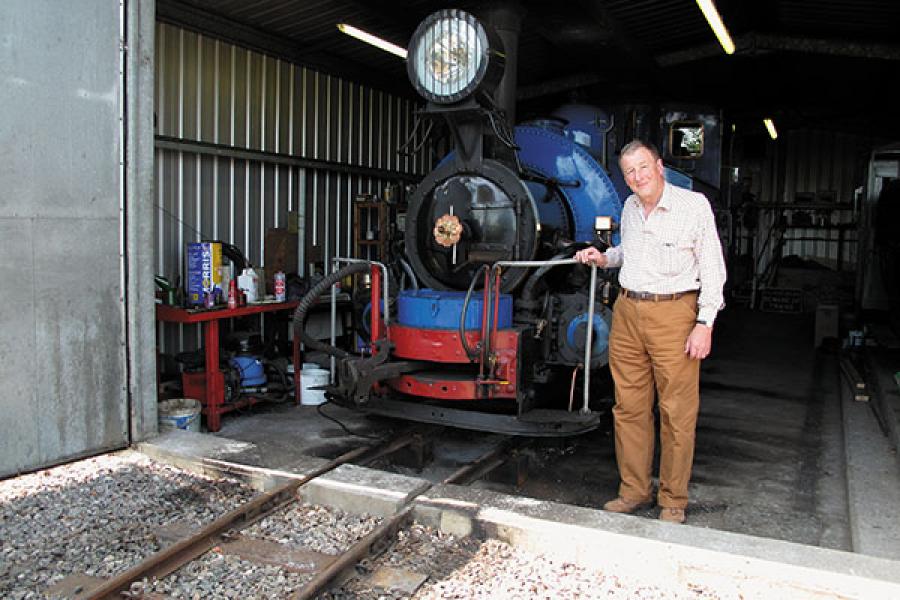 Image: Anuradha Sharma
Adrian Shooter with his Darjeeling Himalayan Railway steam locomotive
The couple is now planning a rally with their Ambassador in India in November 2015. The plan is to drive with 20 other Ambassador owners from Kolkata to Siliguri and then uphill to Darjeeling. They then plan to enter Bhutan via Phuentsholing, drive to east Bhutan and return to India via Guwahati.

This is the first time the Shooters are planning a rally with their Amby. They have earlier done several road trips and rallies with their 1930 Ford Model A, often raising funds for charity.  In 2010, the couple drove 14,000 km from Beijing to Paris. Two years earlier, they had participated in a 3,200-km rally from Goa to Kochi. They’ve also driven over 17,700 km in the US, from Savannah in Georgia to Alaska, covered 16,000 km in South America, and travelled 3,200 km in Myanmar.

For Shooter, who has been to India more than 20 times, the Ambassador and the garden railway manifest his interest in the country as much as his love for old machines. “The reason that I wanted to go to India for the first time in 1986 was that I had a lot of Indian people working for me in London. I often talked to them about India and developed an interest in seeing for myself.”

For many in the UK, the interest in and love for India has got to do with its colonial past. Several families had generations of ancestors working in India. “Those who have been brought up hearing tales of life in India have been surrounded with artefacts. Their homes are full of carvings, furniture, books, photographs, coins, to all of which they have connected,” says  Philippa Waterfield of Wales, who organises family history tours to India for descendents of such families. The nostalgia is sharper for people born in India, those who spent their early childhood in the country. “The smells, the dust, the colour, the people. They remember their first schools—and remember the horror they felt upon arriving in the UK where they were restricted, and it was cold and dark and wet,” Waterfield tells ForbesLife India. 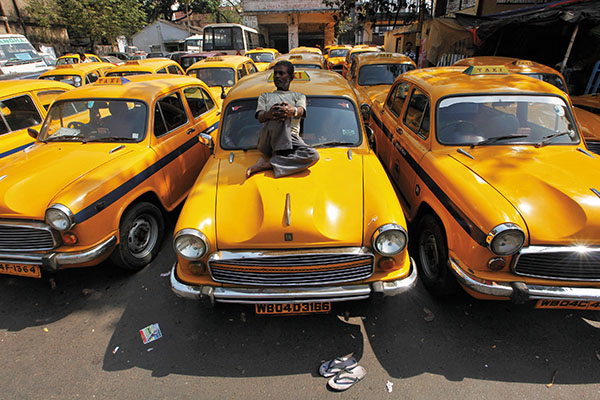 Image: Reuters
A fleet of Ambassador taxis on the streets of Kolkata

However, despite the strong connection with India and the British love for many things Indian, the Ambassador was never a commercial success in the UK. “The car did not sell in the UK because it is very outdated and by the time you added import duty and so on, it was not especially cheap,” says Shooter. “I paid about £9000 for mine in 2003. For that price you could have chosen from several very good cars from Ford or the Japanese or Korean manufacturers.”

David Darrell, the proprietor of Merlin Garages, agrees with Shooter. “It was difficult [to sell the car in the UK] because despite the Amby meeting emission regulations, other points were non-compliant. At the start, there were no seatbelts in the back, no heater or demist facilities and lot of sharp edges, and all these had to be fitted or modified,” he says in an email. He could import only 12 cars for his British clients. Darrell, who has “designed a sports car based on the Ambassador’s components”, feels the car’s run could have been prolonged. “I am sorry that Hindustan Motors has stopped making the car. A lot of modifications could have made the car viable for another period of time. Quality control was the main problem. If that had been solved, the car could have carried on for a bit longer.”

Shooter, however, is not surprised at Hindustan Motors’s decision to stop manufacturing the Ambassador. “My only surprise is that it carried on so long. Considering the competition in India, it probably should have ceased 10 years (or more) ago. Let’s face it, I have an Ambassador because it is a fun thing to have and I like old cars.” 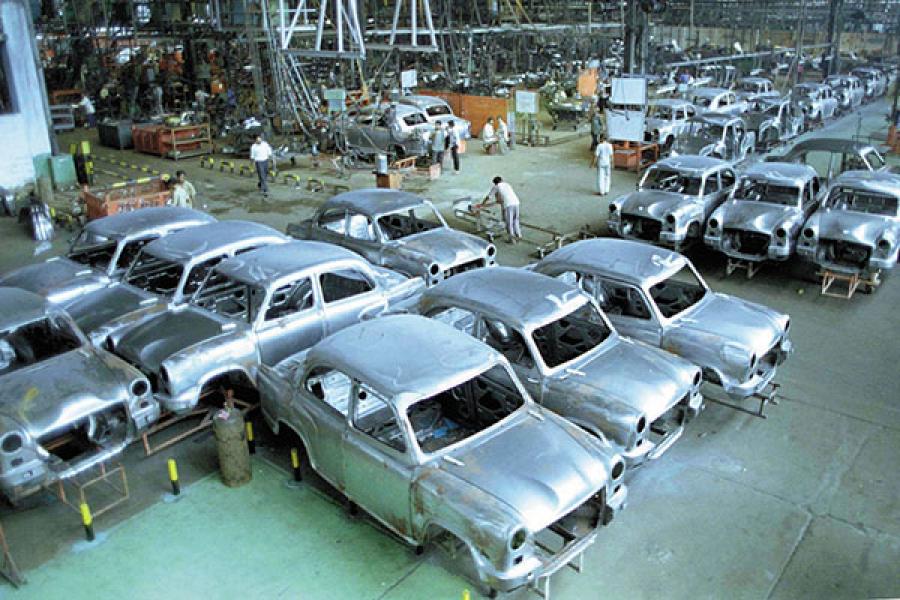 Image: Rupak De Chowdhuri / Reuters
The Hindustan Motors factory in Uttarpara, West Bengal
When he was in Kolkata in 2006, Shooter visited the Hindustan Motors factory at Uttarpara, an experience he recounts with a smile. “We wanted to visit the factory but had not made any arrangements,” he says, narrating how the great Indian jugaad tradition made the visit possible.

The lady in charge of the hotel’s travel desk assigned him a driver who was an “expert at talking his way into places”. The enterprising driver got them through several layers of security and drove them up to the front door of the main office. “There he told the doorman that we had an appointment with the marketing director (which we did not have) and within a couple of minutes we were drinking tea at his desk.”

Shooter told the senior executive that he owned an Ambassador and was “just curious” to see where they were made. “He could not have been more helpful. He was clearly an enthusiast and he told us about the new model they had just launched. He also acknowledged that there had been awful problems with very poor quality (I have seen cars where the doors and bonnet will not shut properly because of bad quality control). He told us that there had been a major drive to improve quality and how the new management, of which he was a part, had used the latest quality processes, like 6-sigma to good effect,” he recalls. Shooter and his group were then taken around the factory by a young engineer “who was very enthusiastic and knowledgeable”.

Built in 1948, the Hindustan Motors factory in Uttarpara is India’s first. “What I saw was a factory that was very clean and tidy,” says Shooter. “It seemed to be working effectively and the finished cars were of quite a good standard, but not up to, say, Japanese standards. It was hopelessly out of date. Also, they were only producing about 16,000 cars per year whereas the capacity of that factory was many times that number. This would mean that their cost per car would be very high.”

For all the nostalgia, Shooter is a realist, and believes it’s time for India to move on. “Steam trains and Ambassadors are part of its history.” And that slice of history is preserved in his home in Steeple Aston, a village which still boasts thatched-roof cottages from a bygone era, and a history that predates the Romans.

(This story appears in the July-Aug 2014 issue of ForbesLife India. To visit our Archives, click here.)