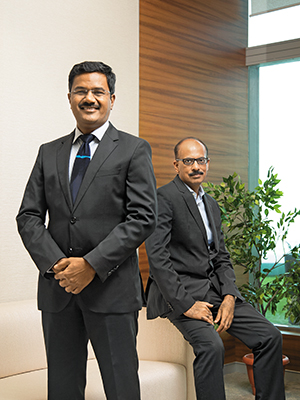 When Sunil Rohokale first visited the ASK Group’s office at Band Box House in Worli, Mumbai, he only had a faint idea about the financial services company and the men behind it. It was April 2008 and he had been invited for a meeting by Asit Koticha, co-founder of the ASK Group and one of the most successful value investors in equity markets.

Rohokale, who was serving as the MD and CEO of ICICI Home Finance at the time, had no prior experience in the capital markets, whereas the ASK Group had earned a name as an institutional broking firm. The company was known for entering into a joint venture with US financial services firm Raymond James Financial in 1993.

Koticha had done his research on Rohokale and the banker’s reputation for building a Rs 83,000-crore loan book at ICICI preceded the meeting. Koticha made him an offer to come on board and lead ASK’s forays into real estate PE.

“Changing jobs was a big thing. It was not easy for a conservative Maharashtrian like me, working with a big mortgage bank, to quit and join ASK. But I joined and created an investment philosophy which worked,” recalls Rohokale. 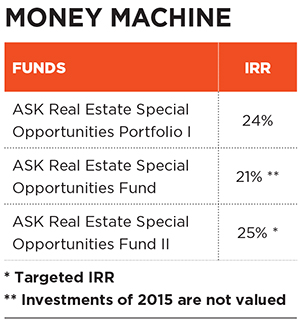 ASK’s entry into the real estate PE business to finance equity projects in the sector came at a time when no fund was interested in equity financing; most preferred debt financing. But ASK Property Investment Advisors swam against the tide and, has, over the last seven years, raised Rs 3,800 crore through four funds, all dedicated to equity financing. The first fund—ASK Real Estate Special Opportunities Portfolio I—launched in December 2009, has returned 24 percent annually to investors, the highest in the industry (see table).

This success can be attributed to Rohokale and his colleague from ICICI, Amit Bhagat, both of whom joined the ASK Group in September 2008. Bhagat was 42 years old and Rohokale 38 when they took up the assignment. Rohokale rose to become the managing director and CEO of the holding company (ASK Group), while Bhagat took over as the managing director and CEO of ASK Property Investment Advisors, which focussed on the real estate private equity business.

In his previous stint, Bhagat was heading ICICI Property Services, which included the investment banking division that advised real estate funds. He knew the thought process of real estate fund managers. He understood why most of the funds failed to deliver returns: Most investors invested in illiquid markets without taking into account the risks associated with developers and projects. He wanted to steer clear of those pitfalls.

Rohokale and Bhagat spent the initial four months at ASK giving shape to their investment philosophy. They decided they would do equity financing only for the residential market—as it was less risky compared to office space since money came upfront to developers—and to deal with developers with track records of twenty years or more in the top five cities: Mumbai, Bengaluru, NCR, Pune and Chennai. They also resolved to do business only with developers they knew and had dealt with as lenders. Since then, the duo has stayed true to every word of this investment mantra.

The first few years of the business were tough. Lehman Brothers had just filed for bankruptcy and collecting money from the market was difficult. They had to tap their contacts at ICICI to get investors.

The first fund in 2009 raised Rs 317 crore. There were around 400 investors and it took around 600 meetings to convince all of them to join the fund.

The second fund was launched in 2012 and raised Rs 965 crore, while the third raised Rs 1,400 crore in 2016. All these funds provide equity financing to developers for their projects through the SPV (special purpose vehicle) route. And investors in the funds have made high returns despite the challenging market post-2008.

“The investors who participated in the first and second funds clearly saw our disciplined approach to investing and the risk-adjusted returns that were generated gave them confidence,” says Rohokale.

These investors were earlier investing on their own in the real estate market. But when Rohokale and Bhagat gave them a presentation about their investment philosophy, they came on board immediately.

Says an anchor investor, “I was very impressed with their investment proposal and I knew that these were not like other funds. They understood on-the-ground investing in the real estate business. I have been the first investor in their first fund and later on invested in other funds as well.”

Most of the high-profile investors end up being part of the investment committee of the real estate funds. In ASK’s first fund, there were four investors in the committee and three members from the company. In the second, the number of investors on the committee increased to six, while in the third, there were 10 investors and four ASK members. “These investors are invited to the committee for better governance. They have specialised knowledge with skin in the game. This aligns our interest with theirs,” says Bhagat.

Bringing investors on board committees becomes important because ASK’s funds actively invest in equity. Most of the money that has been raised by real estate funds has been for debt financing. PE funds usually focussed on debt because developers were not getting finance and the returns for lenders were high. On an average, debt funds have been able to give a return of around 18 percent every year for the last six years.

ASK was the only fund that went in and raised equity money. “Equity gives the ability to not only control the investment but also the ability to select a good partner. We consider ourselves to be active investors where we want to be in control of the project. We put in 70 percent of the money in a project and take the entire risk management aspect of the project in our hands,” explains Rohokale.

He wants to give growth capital and not become a lender and sit on the fence, which is the common model for most funds. And this is what ASK Property Investment Advisors has set out to change.

Besides, fund managers never focussed on the risks. Rohokale and Bhagat like to be extra careful and prefer to be known for managing risk than generating returns. This closely resembles the investment philosophy of legendary investor Warren Buffett and his partner Charlie Munger, whose principle of margin of safety is based on looking for opportunities where the market price is way below the intrinsic value of an investment. This allows fund managers to provide for errors in their judgment if things go wrong.

Being active also means that ASK has to be involved in every aspect of a realty project—from the buying of land to completion. Rohokale feels that he is providing long-term capital to developers, so it makes sense that he works with the developer from very early stages of a project.

“We deal with PE funds all the time but ASK fund managers are different. They enter early, sometimes even at the land-buying stage. They look at the future of the project and they have the expertise to understand issues developers face on a day-to-day basis. Importantly, they work more on trust than paper work,” says Pratik Patel, director of Rajesh Lifescape that has taken equity funding from ASK twice. Patel is a third-generation real estate entrepreneur with a long and successful track record on delivering projects.

One of the checklists on Bhagat’s and Rohokale’s investment philosophy is whether the developer has taken a loan from ICICI Bank or HDFC in the recent past. This establishes the credibility of the developer. In fact, they were the first lenders to Paranjape Developers and Mantri Developers. The duo have identified 11 developers who meet their strict standards. These developers are known to deliver projects on time, are quality-conscious and have an impeccable track record.

But it is becoming increasingly difficult to generate returns in the real estate market due to oversupply and unaffordable prices. Rohokale and Bhagat feel that this is a good opportunity as there will be quality developers who will be looking for long-term equity finance. “For us, it is like value investing… getting good projects way below their intrinsic value,” says Rohokale.

This is exactly the kind of market they anticipated while sketching their investment philosophy and they are right on course.

Tweets by @forbes_india
Chennai gets the realty chills
The wealthy have gone from chasing trophies to yield, says Knight Frank's Lord Andrew Hay