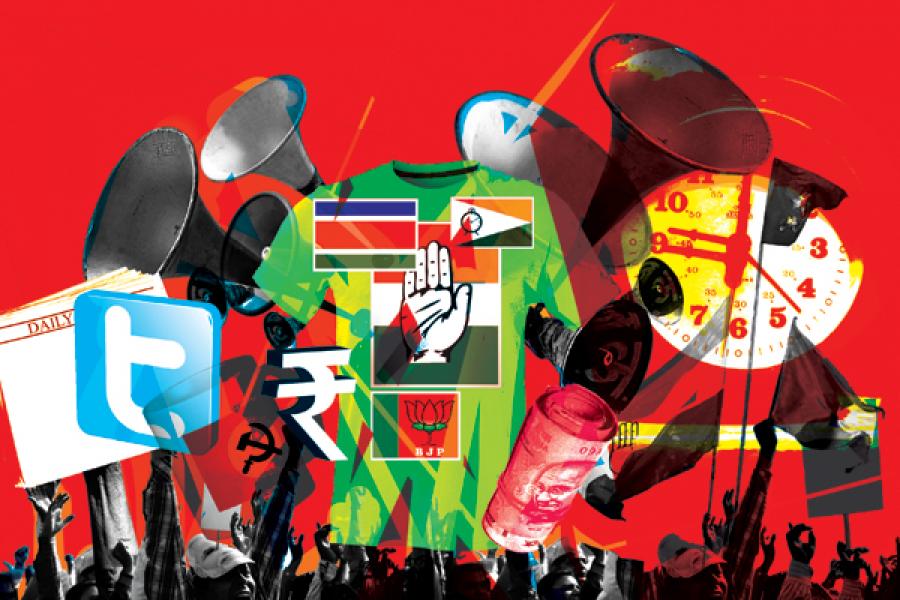 For some, the world’s biggest exercise in democracy also means a chance to start new enterprises, expand existing ones, or set the ground for future endeavours. We talked to a few of these entrepreneurs to find out more about their business models (even though some of them resist being classified as businesses). This is by no means an exhaustive list, nor does it cover every type of enterprise.

In less than six months, VoteRite has pulled in 29,500 users and has as its paying clients the AAP, the BJP and a few campaign managers for individual Congress candidates. A politically agnostic model, it gives its clients profiles on the site, and helps them connect and engage with voters within their constituencies. It has recently launched an election-management programme with close to 58,000 profiles of all the candidates who have either contested in the past or will contest this time. It also provides voter sentiment analysis across social media.

VoteRite is not just a broadcast platform: It facilitates two-way engagement between voters and candidates. Users, who can access the site for free, can create petitions related to their localities, submit them to elected bodies and create awareness with other members using social media. Users can find friends in a particular constituency and can conduct peer-to-peer campaigns for the candidate they would like to vote for.
“We are trying to bridge the gap between citizens and politicians, so that they can constantly interact and engage, regarding constituency-related concerns or larger issues,” says Vikram Nalagampalli, the 34-year-old co-founder. “We are trying to create a kind of chain reaction through VoteRite.”

Post-elections, it is looking at an advertising-led revenue model targeting mostly neighbourhood business. It plans to penetrate remote areas across the country and help people connect with elected candidates.

Big Data startup Frrole has had a sudden spike in the client list over the last two months and a 50 percent jump in its month-on-month (February to March) revenue growth. And it expects the number to increase further in April.

Originally a social media platform backed by data intelligence, it launched its beta product in 2012, which analysed tweets to create insights for its online newspaper clients. Last year, it changed its focus to enterprise business. With semantic and contextual analysis, Frrole breaks down tweets and understands the context around it.

It has partnered with Headlines Today for a live twitter-debate show, integrated an elections-related hub for The Times of India website, created an online newspaper for the volunteers of the Aam Admi Party, and powered a Twitter ‘wall’ for a BJP website. Revenue comes from the data it provides to its clients for a monthly subscription. The company has managed to break even and is currently busy closing its first-seed round, of about $250,000.

It has started disseminating reports on the health of government-run primary educational institutions to nearly 140 contesting candidates from  28 MP constituencies, 224 MLA constituencies, and 34 district-level education officials. It hopes that these will be used to fix ambitious long-term goals by the state’s political parties.

“We want to provide accurate contextual and insightful data about the state of education that has been lacking for elected representatives. We aim to sensitise them towards problems and also suggest ways to help,” says Ashok Kamath, chairman, Akshara Foundation. KLP has so far worked with over 800,000 primary school students in about 22,000 schools across Karnataka and plans to expand, via partnerships, its data coverage across the state.

Delhi-based startup Bluegape Lifestyle makes fan merchandise. And its politically-themed goods—think NaMo coffee mugs, Kejriwal T-shirts—currently comprise 30 percent of its total sales since the launch of the category three months ago; the online store clocks around 200 transactions per day from political merchandise. Launched as a customised platform where users could upload images and convert them into posters, the company had clients such as FilmKraft and rock band Indian Ocean. The AAP’s Delhi campaign in January was the eye-opener for them. “Politics became the most buzzed topic among the youth. We realised the potential of fan merchandise in politics,” says Sahil Baghla, co-founder.

Backed by funding of Rs 2 crore from the Times group and 12 angel investors, the startup has over 100 registered users who contributed more than 10,000 designs. It has tie-ups with AAP and Narendra Modi’s campaign, with which it shares 10 percent of the revenue. “We are also trying to get the Congress.” Having tasted success, the company will continue to supply politically-themed goods after the elections.

The startup currently generates revenue selling analytical reports to political parties and organisations, consulting services to politicians, licenced print content to media, online content to YouTube and other websites and TV shows. But it has yet to break even. Looking at the changing dynamics of politics in the country over the last one year, Garg is hopeful of the scalability and sustainability of the model after the polls: “The intention is to make it a social venture and not-for-profit backed by funding from philanthropic ventures and commercial institutions.” They are exploring additional options, such as including non-internet users through SMS, smartphone apps, interactive voice response services and kiosks, plus more metrics, like educational qualifications, annual income and criminal records related to elected representatives.

One more Bangalore startup, Political Quotient (PQ) connects young people with elected candidates across Karnataka through internship programmes. It offers services across media and event management, including content creation and strategising for social media, organising youth-oriented and health camp events for elected candidates in their constituencies. It also offers data analytics and legislative research content services to politicians in the state.

Party agnostic, it has managed to break even already and has garnered revenue close to Rs 5 lakh over the last seven months.

PQ is running a pilot project with two of its products. One, a grievance-redressal-cum-communication platform, is an SMS/interactive voice response (IVR)/smartphone app/social media-based product that connects citizens with government departments to resolve constituency level issues. The second, an IVR-based scheme management system, provides information and support on state- and centrally-sponsored schemes.

Surabhi HR, its 22-year-old founder, says, “Our aim is not to sell the same product to everyone, but build customised products to solve specific issues in different constituencies.  Currently, we outsource the technology development and monitoring work; we are planning to set up an in-house design lab to develop apps. PQ in its post-election avatar will leverage technology to generate business. In the next two years, we plan to work with 45-50 legislators in Karnataka.”

VivaConnect
Base: Mumbai & Delhi;
Founded: 2001;
Revenue: Rs 20 crore estimated by end of March (income from services to political parties is 25 percent of the total);
Founders: Kiran Raichura and Vikram Raichura

VivaConnect is not a new company, but it began offering voice-based services only in 2011. Today, it offers automated calling services over both inbound and outbound dialling (what the layperson refers to as robo-calling). Its clients range across the political spectrum, including the BJP, AAP, NCP, and a number of regional parties. It claims to have touched India’s total mobile subscriber base—minus those on the Do Not Disturb (DND) list—almost three times over. Their target groups are chosen as per client requirements, depending on client objectives, and sometimes include commercial databases and client-provided lists.

Just as corporate clients would be wary of dealing with a company that also serviced the competition, political parties were initially cautious about dealing with a firm that also dealt with their opponents. VivaConnect overcame this by maintaining “absolute confidentiality of client’s data”. “We do not share any strategic information of a competitor with another. Even within the company, this information is restricted only to the top management to ensure absolute secrecy,” says co-founder Vikram Raichura. A plus point has been their reach: “We connect with even media-dark regions of India. We have the capacity for conducting huge campaigns on a pan-India scale.”

The 545
Base: Room 601A, Columbia Journalism School, “and an assortment of bedrooms scattered across Manhattan”;
Initial capital: Bootstrapped from personal funds, the total “might buy you lunch at a five-star”;
Revenue: None;
Co-founders: Aparna Alluri, Indrani Basu, Iva Dixit, Devjyot Ghoshal, Rishi Iyengar, Anand Katakam

Devjyot Ghoshal and Anand Katakam, Indian students at New York’s Columbia Journalism School (CJS), were frustrated about not being able to cover what was India’s most crucial election of recent times. They felt that there was a dearth of data journalism in India, and that the majority of the election coverage was “the same-old-talking-heads-and-punditry”. Emily Bell, director of the Tow Centre at CJS, advised them to focus, find a niche and build a clean website.

The duo sought out a team from within the Indian contingent at the school, “met a bunch of times through January to work on stories, decided on a name, fretted constantly about the design and finally launched The 545 in February 2014”. Since then, the site, which provides short articles, rich in data charts and graphics, has racked up close to a 100,000 page views and an eclectic social media following.

They’re looking for funding to grow the team, bring in data experts, develop the site, and perhaps continue after the elections, as “a hybrid of Politico and ProPublica”, and are open to collaborations and arrangements “that’ll allow us to evolve into a serious journalistic entity even after these elections are over”.

Is this an investment in their future careers? “Yes and no. Yes, because we’re picking up some invaluable skills, particularly around data and visualisations. Given that few (if anyone) in India are doing data-driven work seriously—or building innovative online news platforms—we’ll have experience that isn’t widely available. And no, because this project isn’t driven by the need to invest in our careers. We started out as students experimenting with data journalism and trying to see what sort of traction it might have in India. We want our friends, and their friends, to read and share our content.” [The group answers emails as a collective, signed ‘The 545’.]

(This story appears in the 18 April, 2014 issue of Forbes India. To visit our Archives, click here.)