Launched last year in August, The Ballot has information on the current Lok Sabha, historical political data and functioning of the government. The guidebook format and weekly updated content so far has drawn about 5,400 unique visitors, with total page views at 22,000. “We wanted to make information available in a format that is visually appealing and easy to understand. The only capital we have invested has been the monthly server costs and licenses for web fonts used on the website, which is about $200 so far,” says Nirbheek Chauhan, the Bangalore-based software developer, who started the website along with Pooja Saxena, a typeface designer. 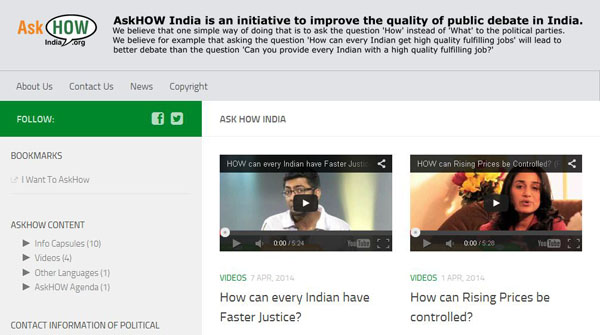 At AskHowIndia, a public-debate platform, citizens can post questions along with their postal PIN codes. These are forwarded to the right candidates depending on the constituency. Founded last year in November, the venture at present is run by an eight-member team in Mumbai, Delhi, Chennai and Pune. “We empower citizens to ask questions by providing expert-led content using info graphics that are easy to understand,” says co-founder Yogesh Upadhyaya. They share content with media houses and political parties. “Right now, for free, so that it is disseminated widely. We will work on our business model post elections."

Backed by New Delhi-based Liberty Institute, a not-for-profit think tank, Empowering India provides information about candidates, constituencies and political parties. The online platform provides access to data about elected candidates including their personal wealth, state and parliamentary level constituencies. It also engages people and organisations to contribute information about the developments in their constituency to connect locally.
Operation Black Dot, an initiative by DDB Mudra Group and Thincquisitive Foundation, leverages social media and on-ground events to engage Mumbai youth in a political discourse. The campaign has collaborated with the Election Commission and claims to have registered 40,000 first time voters across 60 colleges in Mumbai.
Mahesh Murthy, founder and CEO, Pinstorm, a digital marketing agency, created a mash-up called India Influencers, which sits on their site. It collects information from social media rating services, then uses its own methods to arrive at a ranking. “It’s been the most visited part of our site in the last three years,” Murthy says, “and yes, it’s led to business, both election-related and otherwise.”
NetaG is an android-based app by Pune-based engineer Krushnaal Pai, that connects voters with elected politicians, so that they share concerns on civic issues in their locality.
Rock The Vote with txtWeb is a contest by txtWeb, a text-based app platform from Intuit. It challenges young engineering enthusiasts to develop mobile apps on the theme of the 2014 elections. The competition closed on March 31, and the winners will be announced on April 7, 2014.
To help people make an informed choices, MyNeta, provides profiles of contesting candidates, including personal wealth, criminal records and other details. It also offers a Hindi version of the content and an android app, ‘election watch reporter’ to reach a wider audience.
A group of professors from the Indian Institute of Management, Ahmedabad, (IIM-A) started Association for Democratic Reforms (ADR) in 1999. It offers background checks on politicians, including education, criminal, financial and income tax records and analysis of election-related expenses. ADR has conducted ‘election watches’ for the 2004 and 2009 Lok Sabha parliamentary polls, and for Rajya Sabha and state assembly elections.
VoteIndia is an open and free information platform that gives users the option of creating a resolution for voting. The initiative is aimed at identifying the needs of voters to express themselves with a clear agenda, instead of just airing their opinions on discussion boards and forums.
PRS Legislative Research (PRS) seeks to strengthen the legislative process by making it better informed, transparent and participatory. Founded in 2005 as an independent research initiative, PRS was incubated in the Centre for Policy Research (CPR), New Delhi. It provides research support to MPs and MLAs across party lines on all legislation and policy debates.
MumbaiVotes, a not-for-profit online portal funded by voluntary donations, helps Mumbai voters monitor the performance of their MPs, MLAs and corporators and their deliverance on promises. It provides detailed candidate profiles and comparative analysis.
Society for Citizens Vigilance Initiatives (SCVI), or Satark Nagrik Sangathan (SNS) is a citizens’ group that aims to promote transparency and accountability in government functioning and to encourage active participation of people in governance. Started in 2003 as an independent non-governmental organisation, its key strategy has been to assist people in using Right to Information (RTI) using tools like the National RTI Act and the Delhi RTI Act.
Five Forty Three aims to be a one-stop platform for all the election analysis. Tapping its network of on-the-ground political pundits spread across states, the site offers analytical content and data combining it with psephological inputs from expert panel.
Praja, a non-partisan organisation started in 1997 in Mumbai, is aimed at establishing accountability and transparency in governance through people’s participation and interaction with government officials and elected candidates. The organisation is also looking to work with elected representatives in the local, state and national legislatures.