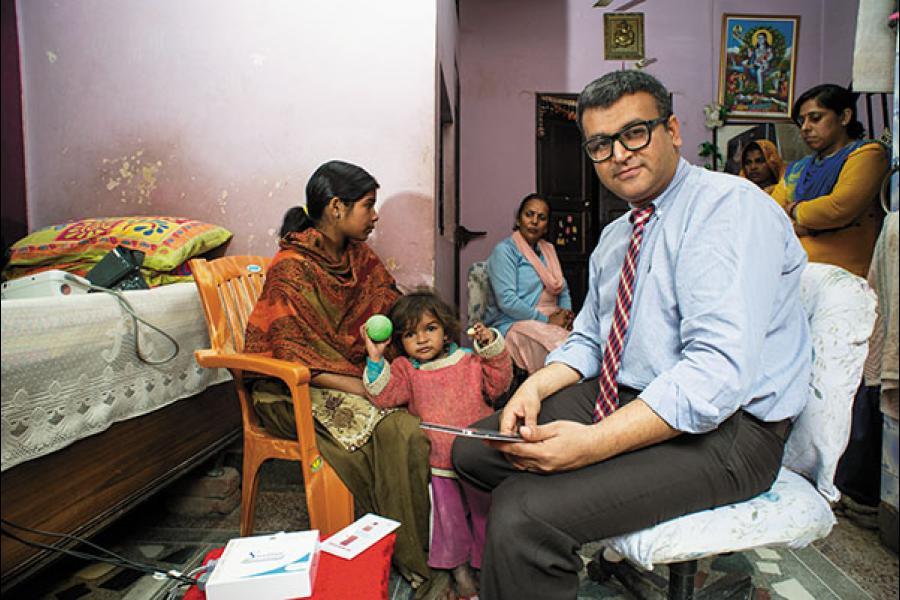 On March 3, the Jammu and Kashmir government inaugurated the use of a device— called Swasthya Slate (SS), literally ‘health tablet’—that can potentially change how health care is administered in the country. The Union Minister for Health and Family Welfare Ghulam Nabi Azad, who was inaugurating the device, was so impressed by it that, while still on stage, he extended its use to eight districts with the worst health indicators, instead of the six planned.

The man behind the machine is Kanav Kahol (34), team leader of the Affordable Health Technologies Division at the Public Health Foundation of India (PHFI). Since January 2012, Kahol and PHFI have been running pilot programmes, and J&K was the first instance of the SS being officially put to use.

The SS has two components: A 7- or 8-inch tablet, and a diagnostic box. The device runs diagnostic tests; in effect, taking the path lab to the patient. This is what makes SS a potential game changer for health care in India, parts of which have health indicators closer to sub-Saharan countries than to the developed world.

“Several states in India, and some foreign countries like Timor Leste, are in line to finalise the use of SS over the next six months,” says Kahol.

THE DEVICE
As of now, the SS can conduct 33 diagnostic tests, including commonly prescribed ones such as blood pressure and blood sugar, and more complicated tests like electrocardiograms or urine protein tests. The device is also capable of testing things like water quality in terms of suspended particles.

For each test there is a specific wire that connects the diagnostic box to the patient, or to the test sample. The number of these wires in a diagnostic box depends on the level of its sophistication, and the number of tests it is customised to perform. The test result is recorded by the diagnostic box, and is transmitted to the tablet via Bluetooth. The tablet, through an app, displays the result, and transmits it to a central database via a 3G connection.

Collection of medical data—essential in preventive health care—is grossly inadequate in India, which has traditionally focussed on curative health care, not preventive health care. With a woeful shortage of medical data—for instance, data on a type of cancer among Indians or, more specifically, women or urban women—doctors often find out about a disease only when it is too late. As of now, our doctors are often guided by what studies suggest about, say, Europeans or Americans. Collection of test results on a central server by the SS would, in time, help build this essential database.

Pilot programmes run by PHFI and its partners across several states in India, each with differing geographies and environment, show that the test results of the SS have 99.94 percent similarity to conventional equipment used by path labs.

The machine is handled by frontline health workers like ASHAs (accredited social health activists) who can now take the SS to remote areas and conduct tests at a fraction of the usual cost. In Andhra Pradesh, during the pilot programme last year, the government was charging just Rs 78 for a set of 10 tests, which would have cost about Rs 1,200 in an urban or semi-urban area,” says Kahol. Once the SS is used commercially, the cost of the tests will depend on the number of tests being conducted, and what each state government is willing to pay for the device. However, the cost will remain similar to the pilot programme’s, and be far lower than the average market cost. 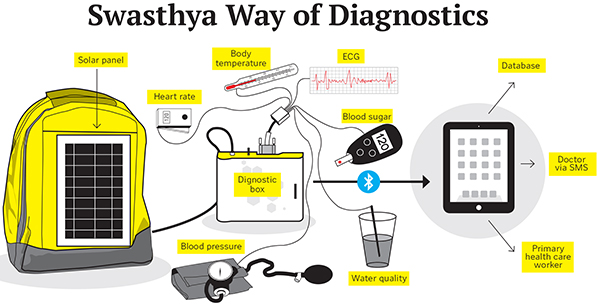 The availability of easy and affordable testing can save lives. Kahol gives the example of pre-eclampsia, a condition which may cause pregnant women to die of seizure during childbirth. In India, 15 percent of the Maternal Mortality Rate is due to this preventable condition. The solution lies in simply tracking a pregnant woman’s blood pressure and urine protein. If blood pressure exceeds the 140-90 range, and urine protein exceeds 100 mg/dl, the woman should be given medication. Before PHFI ran a pilot programme in the Muktsar district of Punjab last year, 10 women were detected with pre-eclampsia when it was too late: Eight of them died. After the SS was made available, 1,000 women were screened, 120 were found to be pre-eclampsic, and were treated in time. There were no deaths among them.
THE IDEA
Kahol recalls his life in the US before he came back to India in 2011. After completing his electronic engineering from Guru Nanak Dev Engineering College in Ludhiana, he went to the US for a Masters in Computer Science. As it turned out, he completed his PhD on human-computer interaction, and was writing multi-million dollar grants, along with the opportunity to work with Nobel Laureate Lee Hartwell at the Arizona State University. After writing over 250 academic papers, Kahol wanted to have an impact in the real world. That was when he met Dr Srinath Reddy, head of PHFI, who invited him to India. “He is a great speaker, and he explained to me how India needed technological innovation, especially to make health care affordable,” says Kahol.

With that central thought, Kahol started roaming in and around Delhi, trying to understand how the bulk of India gets its health care. He found that even though the government provides for primary and peripheral health care workers, these workers are ill-equipped and over burdened to make any real difference. “I found that a frontline health worker spends between 50 and 70 percent of her time filling administrative paperwork—manually filling the first name and last name in several databases!” says an incredulous Kahol.

It struck Kahol that unless the frontline workers are empowered with a tool that allows them to do their job efficiently, nothing will matter. That was the birth of the SS.

The idea was to make an affordable device that is capable of evolving (starting with four tests, Kahol plans to expand to 50), and is integrative (making data easily available for patients and health care managers).

THE FUTURE
The SS is being manufactured by PHFI by assembling 22 components made across India. A typical machine costs about Rs 33,000 and PHFI assembles 250 units a day. The J&K project would require just over 3,000 units, and as orders start rolling in from state governments, PHFI can ramp up production to 3,000 units a day. An initial funding of about $5 million came as a development grant from the Norway India Partnership Initiative in December 2013.

Production of the units is not the troubling concern for Kahol. “Manufacturing things in India is relatively easy and cheap,” he says. His main concerns are two-fold: One, how to continually improve the diagnostics kit and the apps and interface of the SS. Two, how to manage the medical data that is being collected to efficiently find more solutions.

The SS is a platform with a lot of potential. Health workers like Diljo Thomas, GM of Health4All Neerog Nidhi, a not-for-profit association that helped run the pilot programme in Punjab, says that the SS could be the start of actual telemedicine in India, especially with the rollout of the 4G network. It reduces the time taken to disseminate a health advisory or seek a referral from hours and days to a few seconds.

While several private hospitals and single-doctor clinics have expressed interest in the machine, PHFI is focusing on the government route as of now. But, eventually, Kahol wants to make the SS a consumer device. “We want to make health a fast moving consumer good. Health should be like a bar of Rin, it should be like a bottle of Coke—available everywhere!” says Kahol.